The Biggest Liar In The World

Snow White, Superman, and Pinocchio were out for a stroll. The came upon a theater with a sign that said, "Beauty Contest for the Most Beautiful Woman in the World."  Snow White said, "Wait here, fellas, I'm entering this one." After a short while, she came out and Superman and Pinocchio asked her how she did. "I won, of course," she said.


A short while later, they found a gym with a sign that said, "Strongest Man in the World Contest." Superman decided to enter. He came out a little later, and Pinocchio and Snow White asked if he had won. "Was there ever any doubt?," he replied.
They walked a few blocks more, and saw a club with a sign that read, "Biggest Liar in the World Contest." Pinocchio jumped at the chance to show his stuff. He went inside and entered. A while later, he came out in tears. "What happened?," asked Superman and Snow White. Totally broken, Pinocchio replied, "Who the hell is Hillary Clinton?"
A hat tip and my thanks to Mike McC for making me laugh with that one.
All the best,
GB
Posted by Glenn B at 5/13/2015 09:19:00 PM No comments:

I Just Uncovered A Veritable Horn Of Plenty...

...,in my basement, when I came across an ammo can that I had stored, for some unknown reason although laziness comes to mind, away from all of my other ones. When I opened it I was quite surprised to find two boxes of 45ACP, six boxes of 308 WIN, 1 box of 12 gauge slugs, and several boxes of 22LR of three different brands.

The additional 22LR ammo amounted to just over 17% of the 22LR ammo that I inventoried a mere couple of days ago. Now that may, or may not, total a substantial amount of rounds of additional 22LR ammo that I was surprised to find out I had in my possession. Whether or not it is substantial is subjective and depends on what number of rounds you or I might think substantial. Yet, allow me to point out that if you suddenly discover that you have 17% more of anything of value than you had thought you possessed before the discovery, you should consider yourself very lucky indeed! I am feeling that way tonight - very lucky - for having that additional 17% of 22LR ammo in hand. That my friends is a good thing.

I am a firm believer (almost as an invariable rule but not quite as an absolute) that no good deed goes unpunished. For once, at least, it seems that doing a good deed has gone unpunished and I have actually been rewarded. I was looking through my belongings to find items I  probably will be donating to my local herp society, the LIHS, for its upcoming annual auction next month (our only fund raiser). I pulled something off of a shelf and there it was, that out of place ammo can! What a pleasant find. I think I'll have shot to celebrate now that I have already put the ammo away. 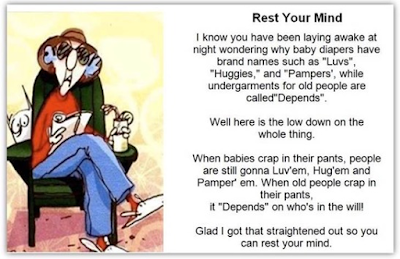 I laughed so hard after reading that, I almost wet my Depends briefs.
A hat tip and my thanks to Tom N for the best laugh I have had all week so far.
All the best,
Glenn B﻿

It Goes Right Along With Everything TSA Doesn't Know

So, when it was recently reported that they have little to no idea as to whether or not their bomb detection equipment is functioning properly or even working at all - why would it surprise anyone! More here.

...and strokes their imaginations while they ponder what it would be like for her to be holding and stroking something else!

As If I Don't Already Receive Enough Email Advertisements From...

...Sportsman's Guide, today I received a Sportsman's Guide advertisement in an email showing the sender as The Firearm Blog. Normally when I receive an email from another blogger, I open it to read it because I expect it to contain correspondence specifically pertaining to me or my interests or to that blog from whence it came. I certainly do not expect to open such an email to discover it is an advertisement for a third party, nor do I need or want to have to start scanning the title of each email from other bloggers to try to determine if they are advertisements or not. That was about the most uncalled for and unwelcome spam email I have ever received if only because it came under the guise of an email from a firearms type blog!

I sent off an email to TFB to try to determine if they actually sent it out (instead of a spammer or hacker using a similar mail address to theirs) and to find out how I can get myself off of that spam email list without blocking all email from TFB. I am hopeful this is not going to become a major pain in the arse with other bloggers trying to earn a few pennies by sending out spam advertising under the guise of their blogging email addresses. If nothing else can do it, that will kill off my linking to blogs, which take up that spam practice, faster than a speeding bullet would bounce off of Superman's chest.