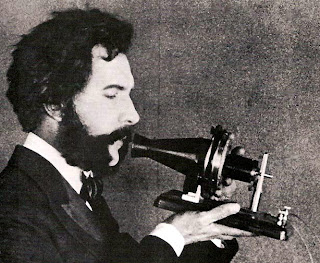 It was March 10, 1876 when those words were shouted into the mouthpiece of a contraption that has since become indispensable in modern day life. Yes, those were the words spoken by Alexander Graham Bell to his assistant Thomas A. Watson (photo was dated 1876 and is actually one of Bell speaking into a prototype of the telephone). Watson quickly obeyed Bell's command to come to him for he had heard Bell's words clearly. While Watson was only as far away as the next room, he may as well have been a world away for the means by which he had heard Bell was the first telephone, and the telephone has definitely bridged a gap as wide as the world when it comes to communication. As a matter of fact, in 1915, when Bell was invited to participate in the celebration of the completed transcontinental telephone lines, he again uttered those same words to his faithful assistant Watson. This time Watson replied that it would take at least a week for him to do so. You see Watson was in San Fransicko Francisco at the time and Bell was calling him from New York City!

http://memory.loc.gov/ammem/today/today.html (go to March 10 if this brings up another day).

Email ThisBlogThis!Share to TwitterShare to FacebookShare to Pinterest
Labels: telephone, thomas a watson, today in history

NYC's Mayor Bloomberg Bites Off More Than He Can Chew

In my blog post immediately prior to this one I wrote the figurative words: "Choke on it Bloomberg" relating to the Henry Repeating Arms 22 pump action rifle being made within New York City. I suppose the mayor of the big apple once again has bitten off more than he can chew and he again has something else to choke on. This time though it is not the fact that a firearms manufacturer is legally producing firearms within NYC, but rather that a lawsuit filed by New York City against legal manufacturers has just been slapped down by the Supreme Court.

Here is the content of an email sent to me by the NRA. it is about time this country and our courts start to view firearms liability as being a problem of lawbreakers and not of they who legally manufacture or distribute firearms.

On Monday, March 9, the U.S. Supreme Court denied consideration of New York City and Washington, D.C. lawsuits, New York v. Beretta and Lawson v. Beretta, respectively, that tried to hold American gun manufacturers responsible for the acts of criminals. The Court 's order leaves standing a pair of decisions by the U.S. Court of Appeals for the Second Circuit and District of Columbia Court of Appeals, both of which found that the Protection of Lawful Commerce in Arms Act (PLCAA), enacted in 2005, prevents these types of lawsuits against lawful firearms manufacturers and dealers.

"Big city mayors conceived these lawsuits to try and litigate American gun manufacturers - who President Roosevelt referred to as "the arsenal of democracy" - out of business," said Chris W. Cox, NRA chief lobbyist. "NRA has always believed the courts would agree with Congress that the PLCAA rightfully stops these reckless and politically motivated lawsuits."

In 2000, New York City, Washington, D.C. and several individual plaintiffs sued gun manufacturers, based on the idea that although they manufactured a legal product, forcing them to pay hundreds of millions of dollars in legal fees just to prove their innocence in court would drive them into bankruptcy. In addition to being based on a bogus legal theory, these lawsuits endangered American armed forces and law enforcement. During congressional debate over the PLCAA, the Department of Defense agreed with the NRA that bankrupting U.S. gun makers and making us dependent on foreign countries like France, Russia or China for small arms is a threat to America's domestic and international security.

"We are pleased that the courts have recognized the misguided intent of these lawsuits," concluded Cox. " America's law-abiding firearms manufacturers must be protected from reckless suits that have no legal merit."

I truly enjoyed reading that, I hope you did too.

I have always wanted a 22 rifle in pump action, but just have never gotten around to buying one. Most of the ones have seen over the years are many years older than me, and that is pretty darned old since I am passed the half century mark by a few. Then Taurus came out with one, but I was not impressed by write-ups I read, nor by what other shooters told me about them. Now Henry Repeating Arms Company is producing one that is a reminder of a bygone era of when these rifles were often seen and shot at carnivals, or seen accompanying boys on bicycles as they headed out down the road a ways to hunt squirrels.

Just take a look at this rifle (click on the pic to enlarge). I hope Henry does not mind me using their pic to illustrate it; it is a beauty. From the deeply blued octagonal barrel to the richly finished and wonderfully grained walnut stock, I think you have to admit it is one fine looking rifle. Besides that, what with the pump action fed by a 15 round tube magazine and it being chambered in .22LR (also chambered in .22 Magnum) it must be one heck of a fun plinker, target shooter or squirrel slayer. My bet is that it would put those bushy tails in the pot but if you prefer punching holes in paper I'll bet it would do the trick. It is not an inexpensive rifle for sure, what with a SRP of $515.00 (in .22LR), but that just makes me think it is a well made one. This would be a great find under the Christmas tree next Christmas; of course, it would also be nice as a birthday present so I could get in some squirrel hunting with it this coming fall. A man can wish, can't he!

For more info about it visit the Henry site at:

Of course there is a thing or two that makes the Henry Pump action rifle even more special. It is made in America, and better yet it is made in Brooklyn - and for those of you who don't know -yes Brooklyn is inside of New York City. Choke on it Bloomberg!