Mr. President - You Got That Ass Backwards

When you vote, as an illegal alien, you are not suddenly a citizen! Yet, you said when you vote you are a citizen! The right thing to have answered was that only U.S. citizens can vote in the upcoming election and for an illegal, or even a legal, alien to do so in our elections would be a criminal act. The fact is that when you are a citizen is when you can vote, aliens cannot legally vote in our federal elections. That would have been the right thing to say along with telling the interviewer, who claims to be an illegal alien, that it would be a heinous and criminal act to vote when not a citizen and that it would be dealt with appropriately.

Let's face it, let no one make any mistake about your answer and its obvious intent - you were evidently encouraging an illegal act relative to one of our most cherished rights and important responsibilities - the act of a citizen casting his or her vote during an election. There can be absolutely no mistake as to what the woman asked you. She asked you if she, as an illegal alien, votes - will Immigration come looking for her.

It seems to me that you then gave an answer that in every conceivable way goes to encourage illegal aliens to illegally vote in Tuesday's election. You have apparently encouraged an illegal act and you are the president of the nation against which that crime would be committed. You sir, in my opinion, are worthy of only one thing - immediate impeachment.

If You Took The Time To Change Your Clocks Today...

...then take the time this Tuesday to change your country back to being great again. 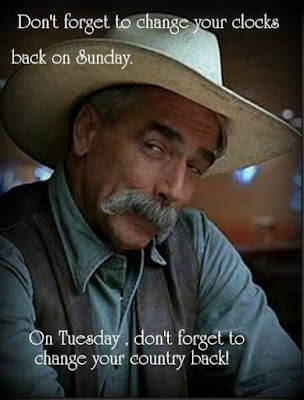 ...for I change was I today! It just so happened that I walked by the tortoise enclosure today as my female Hermann's Tortoise was excavating a hole into which to lay her eggs. I picked her up and checked but she had not started dropping the eggs yet, so I added a bit more cypress mulch to the tank to make it a bit deeper and set her down on it above the hole she had dug. About a half hour later, I looked again and there was one egg. Maybe an hour and a half or two later and she had closed over the hole already.

When I checked I found one smashed egg near the surface of the substrate and four more hopefully healthy and fertile ones further down. This is the first time, in probably the last 2 years or more, that I have caught her in the act. That smashed egg may mean too little calcium in her diet but I kind of doubt that since I give them a varied diet that should contain enough. Some cuttlebone will be added to her diet to supplement it so that when she lays again next spring or summer, she won't have any chance of a calcium deficiency. Mind you, I am not saying she is deficient in calcium, just that it could be possible especially if she laid eggs during the summer when she had free reign of the fenced in portion of our backyard which could mean me finding some babies in the yard next spring).

As for me being at the right place at the right time, knowing that she is laying or very recently has laid eggs is pretty important because the eggs require a temperature between about 80 to 94 degrees, for the duration of their incubation, in order to survive. Too cold and they die, too hot and they can die, or if they survive the babies are likely to be born deformed. It does not take more than a couple to few hours to kill the eggs either way. I got them into the incubator within 10 or 15 minutes of my realization that she had completed her task. The incubator is a Hovabator brand, the type often used for quail and other fowl eggs. I'll be keeping a close watch on it to make sure it does not get too hot before I hit the hay for the night, more likely to die if they fry than if a tiny bit on the cooler side. The thermostat can take several hours or more to be fully adjusted so I will be checking every 20 minutes or so.

Over the past couple to few years, when I incubated what eggs I found from her, they all either were infertile, died before I got them into the incubator because I did not realize soon enough that she had laid eggs, or died during incubation either because of disease or because the thermostat malfunctioned.  There is a chance that the male I have is not producing viable sperm. Of course, I suppose there is a chance that the female has become barren but I doubt that since she has produced viable eggs in the past - just never with the new male. With my original male the eggs were always fertilized but he disappeared from my yard three or four years back, stolen I suspect. I then put a different and much younger, possibly too young to breed, male in with the female. Too young or not, he sure was horny and has performed every chance he has gotten. Time will tell, this time around, if he is fertile or not because I caught the female in the act and got those eggs into the incubator without delay. They are also in a newer incubator so if the old one maybe malfunctioned and killed the eggs, it is less likely to happen this time.

Speaking of time, it should take anywhere from about 65 to 90 days for the eggs to hatch at the temperature range in which they will incubate. I plan to keep the temps between about 86 to 90 degrees Fahrenheit. That should produce a mix of males and females or possibly all females if the temp steadily runs at the higher end of that. The sex of hatchling tortoises is determined by the temperatures at which they are kept during the incubation. The higher temps, within the safe range, cause all females to develop while the lower temps in that range allow for all males. Somewhere between them produces a mixture of males and females. I would settle for a mixture or all females. Either way, I will be happy if the four apparently good eggs all hatch.