Not all that long ago I wrote a piece: From Purdy Good to What The $?@& Happened, see: http://ballseyesboomers.blogspot.com/2008/08/ballseyes-firearms-training-and-tactics.html

In it I basically explained some of the things that can make your shots go astray; and i further explained that sometimes your accuracy may go off target somewhat through no fault of your own, but rather due to certain aspects of the ammunition you are firing. It kind of boiled down to a discussion of "what in hades am I suddenly shooting so poorly at 50 feet, when I had been shooting great at 21 feet sort of a thing. My conclusion was that if all things considered were equal at both distances, then the likely culprit was that you were shooting .22LR ammo, and that trajectory and or quality control of the ammo were likely at fault. No, I won't bother to explain more here, go to the link and read what I wrote previously if you want more explanation.
What I will do here though is I will give you some pictures of targets to illustrate exactly what I meant in that other piece. Look at the pics, and go to the article, and you will understand exactly what I meant:
1. CCI MiniMag at 21 feet 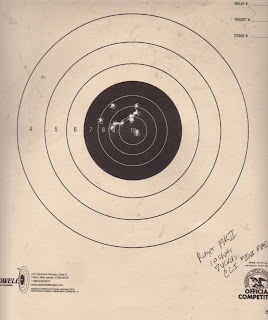 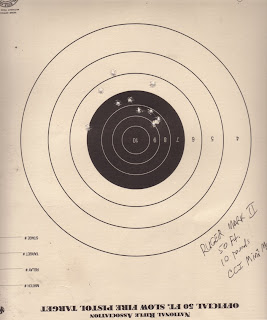 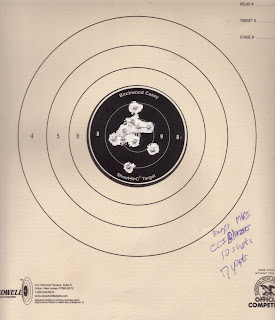 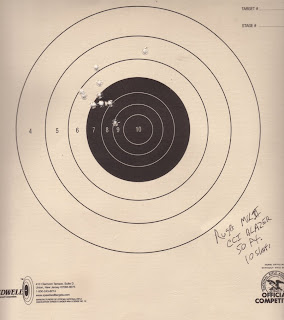 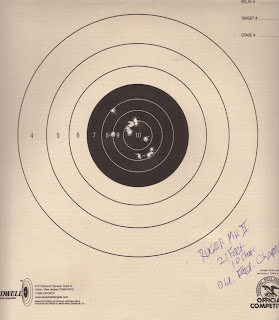 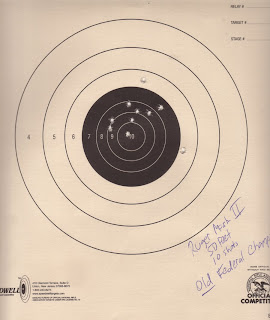 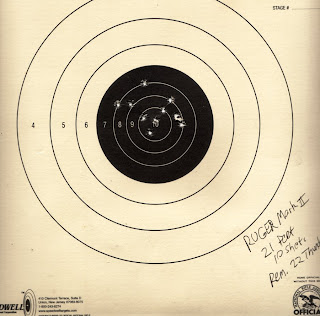 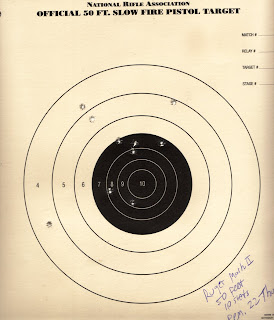 Remember that all of these targets were shot with the same gun, a Ruger MKII Pistol, by the same shooter, using the same technique and hold. Federal Champion and CCI Mini Mag both showed the most reliable grouping between the 21 foot and 50 foot distances; and it is a pretty sure thing that quality control had a lot to do with it. As to the higher shots at 50 feet, that was due to the trajectory aspects of .22 LR ammunition.

...and far left extremists and whacko liberals flee in panic, and so I guess too do some corrupt politicians and terrorists, as she picks up steam rolling on toward Washington.

Folks let me say it this way, tonight I thought I heard mayor Rudolph Giuliani give the absolute best political speech I have heard since some of those made by Ronald Reagan. Yet, his speech stood up as the best I had heard in years only for all of several minutes. You see, it quickly became obvious that once Hurricane Sarah hit that stage, that great speech by Mayor Giuliani that I had heard only moments before was now being bested by the words of the Governor of Alaska, the next Vice President of the United States of America, Sarah Palin.

I have regained faith in the Republican Party, I have even gained a great deal of of faith in John McCain. The woman he picked as his vice presidential running mate is as presidential as anyone could expect of any vice presidential candidate. The big question has been could she step into the shoes of the president at a moment's notice in the event of catastrophe; I think she answered us all tonight. There is no doubt in my mind as to for whom I will cast my vote in November - McCain/Palin all the way to Washington.