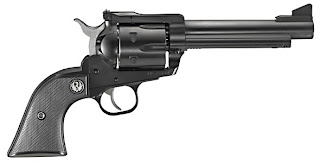 I cannot recall myself ever owning a single action only revolver, so that would be something new for me. Going with the concept of 'new' I figure that a gun with new in the name would fit right in. The one I have chosen for this edition of Biweekly Gun Shots is the Ruger New Model Blackhawk Convertible in .45 Long Colt/.45 Auto. Yep it can fire both and comes with interchangeable cylinders one for each caliber. Being that I have never owned a firearm in .45 caliber of any sort, this would be another new addition for me. Now if I opted to be on the frugal side then I'd go for this fine revolver in .357/9mm. It would be a tough choice, but if I had enough money to buy what I wanted, I think I would opt for the .45 first just for a plinker. Of course it would be a pretty good gun to have in hand if some evil doer broke into my home and tried to harm my family or myself although I must admit, in that case I would much prefer a double action handgun, or my Remington 870 to be in hand.

The .45 version of this revolver is available with either 4 5/8" or 5 1/2" barrels. They both come with a blued finish, ramp front sight, adjustable rear sight, have a western style grip. The shorter barreled version weighs in at 42 ounces, and its length is 10 1/2". Its barrel has 6 grooves with 1:16" RH twist. The longer barreled version weighs in at 44 ounces. It has an overall length of 11 1/4". The grooves and twist specs are the same as for the shorter barreled version. The cylinders of each hold 6 rounds. The MSRP is just under $600. (All this info can be found on the Ruger site at http://www.ruger.com/Firearms/FAProdResults?function=famid&famid=19&variation=.45%20Colt%20/%20.45%20Auto%20Convertible&bct=Yes&type=Revolver.) By the way, the one shown in the pic is the BN-455XL (the 5 1/2" version) as opposed to the shorter BN-44XL not shown
I could just imagine myself having to get western cut jeans and a pair of decent boots before going out to shoot this one. Nah, not really but the attire would fit right in with the gun, that is for sure.
All the best,
Glenn B
Posted by Glenn B at 2/13/2009 07:02:00 PM 2 comments: