I Don't Know Which Was Better For My Psyche...

...watching my Bearded Dragons wolf down a couple of large Blaptica dubia roaches or weeding and planting out in my garden for an hour or so. 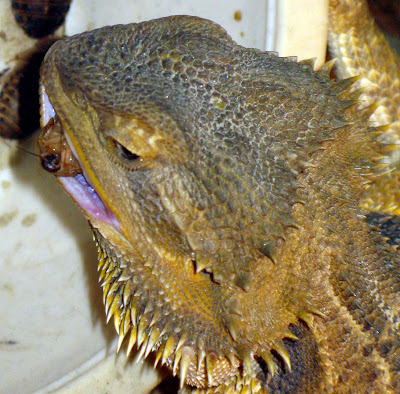 I planted some lilies, and potted some tomatoes and put tomato cages around some others that I planted last week. The tomatoes that I potted today, along with a few pepper plants and some potted flowers, will be a house warming gift (along with some good wine) for my daughter and future-son-law later today. She who must be tolerated adored and I are going to visit them for a BBQ.

Thinking about my morning's activities, I have to say I had fun doing both but I think I could more readily enjoy sitting down to watch the beardies eat as many roaches as they could chow down before I would choose to do the gardening. That's at least for today anyhow because I also really do enjoy working the dirt. I suppose that is the 9 year old kid in me. Doing both, one right after the other, was great.

Why Do Idiots Try Get Through Airport Security While Armed

I just do not understand how it is that during the past week, the TSA reportedly seized 54 handguns that people tried to get through airport security on their persons or in carry-on luggage. I don't mean that I do not understand how TSA found them. Even morons can find guns at airport security; Heaven only knows how many get by them though. What I do not understand is what would compel someone to try to bring a gun onto an aircraft with the laws as they are (mind you, not that I agree with those laws) and with as much security as is in place. I can understand someone maybe forgetting that he or she had a gun in a carry on bag that maybe had been used to legally transport the gun at a previous time. I cannot fathom though how someone could have that gun on his or her person and forget about it. Yeah, maybe if someone had pistol in a holster that was strapped to his wooden prosthetic leg, he could forget it was there, if not paying attention, when putting on the leg that day but otherwise I just don't get it. See:

Islam: A Form of State Posing As A Religion

Yet, I do not recall the Christian or Jewish faiths instructing their followers to go out and kill they who will not convert to either faith. Maybe it is in the bible and I am unaware of it. Certainly though, I am unaware of they who take that literally nowadays - except maybe for a few kooks who do not act out on it. On the other hand, there is a religion that preaches such today and many of the followers of that faith are killing in the name of it and many other of its followers become violent in the name of it. That is  fact that cannot be overlooked. Just because the topic comes to religion does not mean we should overlook the obvious truth. People try to deflect that line of reasoning by saying things like Christians or Jews or Americans do horrific things to each other every day. Yes we do but most often on an individual basis and not based upon any tenet of those faiths or of American law. Tell me, when is the last time that Americans, by the hundreds of thousands, violently protested someone using their freedom of speech over a cartoon that mocked a religious figure?


I am not anti-religion, however, I am anti seat of power that tries to regulate my liberties and rights in violation of my Natural (and possibly God) given rights by use of violent force that leads to injuries and death. It is historical fact, that every nation into which Muslims have embedded themselves, have eventually fallen to them once they reach a certain size of the population. It is a well known fact that Islam preaches that that infidel must be converted or killed. It is well documented that Islamists have followed that literally in every country into which they have established themselves. The same is slowly but surely currently happening in many countries around the world. In some it has reached an advanced stage, in some others the Muslim population is not yet high enough for it to be so advanced but it is commencing in them bit by bit. Let me name just a handful of them: Denmark, England, France, The Netherlands, Israel, Egypt, Germany, India, Australia, Nigeria, the United States of America.


Take a hint from what one of them said, I refer to one of the assailants who recently hacked to death a British soldier. He told us to get out of Muslim nations and the violence will stop. No, it will not stop then. Why not? Because Muslims keep on infiltrating other countries and spreading the violence to them, it is the way of that so called religion. That is a fact that you cannot deny in the face of history. Of course, every Muslim is not of the same mind set but I will say this - I do not see Muslims fighting back against such or actually making a concerted effort to confront the violent ones and to put an end to the violence. They yammer about being persecuted; yet, in the name of their religion, thousands are savagely killed each year. Yes, there are a few small groups but not many who speak out but they do little else than talk. What will stop the violence? It would have to be either a major change in how Islam is practiced or having Muslims retreat from every non-Islamic country remaining in the world. I would prefer the first choice by far but if things continue as they are, I would be willing to implement the second.


On the flip side, in places like India and African nations, Christians actively kill Muslims in much the same way Muslims attack Christians and Jews but in almost every instance they are reprisal killings. The Christian and Jewish faiths are not, to my knowledge, trying expand themselves by forced conversions and the taking over of nations as at least Christianity did in the past. Nor are Buddhism, Taoism, Confucianism, Hinduism, the Wiccan, or any other religion trying to expand by use of rampant violence. Nor, to my knowledge, do Christians routinely seek out and kill ex-Christians who have converted to Islam but there are many accounts of Muslims brutally killing ex-Muslims who have converted to other religions. What happened to freedom of religion in those instances that the Islamists claim they are free to practice when it comes to them practicing Islam? The truth is that Islam does not at all tolerate freedom of religion and once Muslims are in a position of power in any nation they begin to enforce Sharia law instead of obeying the law of the land.


If you care to avoid the facts and to say, 'oh my goodness how can you speak out against practices of a religion since people are free to worship as they see fit', let me remind you that I too am free to speak my mind, and free to live, yet if I spoke out against Islam in a Muslim nation I would likely be executed. It could even happen in in a nation like England or India or Nigeria or Denmark or even in the USA. Any so called religion that, by its dogma, violates the rights of non-believers by imposing its law upon them is not religion at all, it is a form of state. Once it becomes that, there is no right for it, by law or Nature, to even be considered a religion let alone any liberty afforded to it to be practiced as a faith.
All the best,
Glenn B
Posted by Glenn B at 5/26/2013 07:55:00 AM 1 comment: