President Trump's acceptance speech was one of the most impressive that I have ever heard. His reference to the government going back to be one run by our citizens instead of by politicians who have enriched themselves at our expense while our nation has essentially crumbled was excellently put. If the people give him a chance I believe he will become one of the  greatest unifying factors in our history and only if we give him that chance can we become great again. I will note, he used the word "I" rather infrequently speaking more about us and the citizenry than himself getting things done.

One other thing I noticed, on which I feel compelled to comment, Bill Clinton seemingly was scowling as President Trump walked by him as the president left the dais. That and 70 or so democrats boycotting the inauguration does not bode well for unity. These leftists defy my understanding of my fellow citizens.

Dedicated To Our New President

Would It Be Too Much To Ask That The Alleged Child Taping Mom,...

...if convicted of any crimes involving child abuse, not only permanently will loose custody of her son and get a stiff jail sentence but also that she will be surgically altered so she can never again give birth to another child for her to victimize. Of course you can bet that will not happen even though it may well be a good idea for her and for any parent who does likewise to their children. What will happen is she probably: will be assigned an attorney at tax-payer expense, the attorney will plead she is a troubled teenager (she is reportedly 18 years old and an adult under the law), mental health experts will testi-lie on her behalf at tax payer expense, she will be receive counseling at tax payer expense, she may (not probably) be put into jail (and that will be at tax payer expense), if she is jailed her child will be cared for at tax payer expense, she will retain her breeding functionality and my bet is she will produce more children who will sooner or later be cared for at tax payer expense and whom she may very well violate in the same manner as the child she allegedly taped to the wall and sooner or later she will regain custody of the child she taped to the wall. Our justice system is a bunch of bullshit as it basically protects the accused more than it does the victims and it perpetrates more crime (just look at recidivism rates for any crime). If she is found guilty, surgically removing her ovaries would at least assure she could never birth another victim - is that really too much to ask!

More about her alleged crime here. 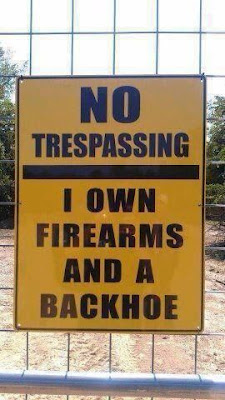 That would be one of my guesses as to where this sign was posted. Then again, it could be my buddy's place in Wyoming except for one thing, he doesn't have a fence!

...of what I suppose amounted to rapid fire naval artillery back in its day.

Too bad there is no live fire demonstration.

I Have Awakened To A Day That Promises...