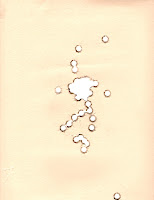 ...for my order of .45 ammo to arrive before heading out to shoot the Remington 1911-R1. I hit the range tonight with 150 rounds of .45 JHP ammo from the little I had in stock. I shot 50 rounds of that, through the Remington 1911-R1, without a glitch. Not the best shooting I have ever done, certainly not the worst either. It was the first time in many years that I have fired anything in .45 caliber. I shot at 7, 15 and 25 yards. Everything seemed okay but I will say that the trigger had some creep to it and is certainly set at a higher weight of pull than 3-5 pounds as Remington claims it is set. Nonetheless, all my shots hit the paper which is about chest sized. The 7 yard target is shown, that was the first 28 shots. I did somewhat better at 15 yards. Not so great at 25 but as I said all shots hit the paper even though the group size at 25 yards was about 11.5 inches.

Then, I put the 1911 away and shot my Beretta 92FS. I put about 100 rounds through that. I just wanted to make sure that the slide stop spring, that had popped out when I was cleaning the gun last week, was back in there properly and that I had not twisted it out of shape or any thing like that when I put it back in place. It stayed put and functioned properly. 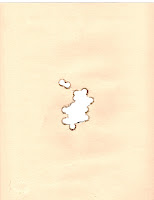 I put the Beretta away and took the Remington 1911-R1 out again. I fired only another 14 rounds. I shot slow fire at 10 yards and got a group much better than even the one I had shot at 7 yards earlier. I am pretty sure I was anticipating recoil somewhat for that first box of 50 rounds but it seems I got better when I shot these last two magazine loads of ammo. I think I could come to like this pistol very much.
I had one jam with the Remington, a failure to eject and the shell casing prevented the last bullet from the mag from chambering as it rode back forward with the slide - it looked sort of like a double feed but a contorted one at that. I am not too concerned. That might have been caused by me, maybe by the gun, maybe by the mag, if it starts to happen regularly I will check into the reason.
After that, it was time to leave, my hour was up. I had taken my time between sets of two mags worth of shots, I saw no need to hurry with a new pistol. I only used the two Remington mags that came with the pistol, and that had me taking more time to reload between sets. I'll check out my supposed mil-surp mags another day, I have 9 of them. As it turned out tonight, I had a bunch of ammo left over but that's okay, I can shoot that next time.