Talking About Close To Home...

...how about close to work. This afternoon, at about 2PM, on Jamaica Avenue near 162nd Street (about 9 blocks from one of my work locations) a hatchet wielding man attacked and wounded two police officers, in a group of four of them all recent police academy graduates. One of the officers, hit in the back of his head, is undergoing surgery in critical condition. The other wounded officer sustained a wound to one of his arms. At least one, maybe both, of the uninjured officers opened fire, killing the suspect. During the shooting a woman passerby, about a block or so away, was also injured either by a stray shot or ricochet; she is reportedly out of surgery and recovering. More info here.

Surveillance video, probably from a local business, caught the assailant just as it appears he is winding up to swing the hatchet at one of the officers. Video link below:

The hatchet wielding man has not yet been identified. I am almost willing to bet that Muhammad is somewhere in his name but that is only a guess so I am only almost willing to make that bet. Anyway, here is hoping that the officers make full and speedy recoveries and likewise for the woman who also was shot. As for the guy with the hatchet, it seems he got what he deserved.

Ebola May Be A Whole Lot Closer To Home...

...for me and mine, and many millions more New Yorkers, than anyone would have believed just a month ago. A doctor, identified by MSN as Craig Spencer, who did humanitarian work with Doctors Without Borders reportedly is currently undergoing quarantine and Ebola testing at Bellevue Hospital in New York City tonight. (source)

Oh shit, I just got done typing the above paragraph and went back to the article to get more info and the link and there was an important update. It is no longer suspected that he has it, he has tested positive for Ebola and definitely is infected with it. (source 1 and source 2)

Man oh man, that is way too close to home for me. I live within about 20 miles from that hospital. I must say this is an alarming development if for no other reason than NY City is a metropolis of at least 8 million people and if Ebola spreads there it may spread like wildfire. Mind you, such a spread might not only take place in the city but also across the world since NYC is a major national and international travel hub. Of course, NYC's Mayor DeBlasio is assuring folks that:

“Our understanding is that very few people were in direct contact with him,” (source)

The thing is though he reportedly came back to NY from Guinea, one of the hardest hit Ebola stricken nations, on October 14 and his been free to roam about the city or wherever else at will. It has been reported that:


"Even as the authorities worked to confirm that Mr. Spencer was infected with Ebola, it emerged that he traveled from Manhattan to Brooklyn on the subway on Wednesday night, when he went to a bowling alley and then took a taxi home.
"The next morning, he reported having a temperature of 103 degrees, raising questions about his health while he was out in public." (source)
Get that! This guy reportedly was traveling around NY City wherever he wanted to go and only after he had a fever of 103 degrees did he decide to report himself. I have to wonder, and maybe you do to, did his fever suddenly explode out of nowhere from a normal temperature of 98.6 to a high fever 103 OR did it develop, as it seemingly has in others with Ebola, from a lower temp over a day or two before it got that high and thus maybe put many others at risk as it was developing. One also must ask, should he have called himself in to authorities as possibly having Ebola a day or two before he actually did so! I can only hope the fever came on suddenly and that he was not contagious while on the subway or at the bowling alley or in the cab or wherever else he may have been over the last couple of days. (10/24/2014 - Edited To Make A Correction: According to the NY Times, it was incorrectly reported, at first, that Dr. Spencer alerted medical authorities after his fever had reached 103. It is now being reported that he alerted authorities when he had a fever of 100.3 not 103; there supposedly was a transcription error when the original information was given out.) (source)
As far as mayor de Blasio assuring folks that very few had direct contact with him, how about the guy who wore the same pair of rental bowling shoes or who stuck his fingers into the holes on the same bowling ball after Mr. Spencer? How about the people who sat in the same subway seat as him or those who ran their hands down the handrail of the stairway leading to his train. How about anyone who was in the same taxi he took home. It may be all well and good to say it is highly unlikely that they will catch it from him but try selling that to scared New Yorkers, let alone to the families of the over 4,000 poor souls who have succumbed to Ebola during the current outbreak.
One thing in New York's favor - hospitals in NY State claim to have been preparing for cases of Ebola for months now and Bellevue is reported to be one of eight that has been specially set up to handle Ebola cases. It has one of the best trauma units in New York City and hopefully one of the best infectious disease/quarantine units too. Regardless, this is way too close to home not to make me feel concerned for my family's safety at least a little bit.
Right now though, I will admit I am more worried for Dr. Spencer, those he came in contact with, and those who will come in contact with him by way of treating him at Bellevue. Him for obvious reasons, he has it and needs our best wishes, thoughts and prayers. Those treating him as they are much more likely to come down with the disease than anyone else after exposure to him and those with whom he came in contact because there is a chance they could get it.
Let's hope and pray that Dr. Spencer gets well without infecting even one other person.
All the best,
Glenn B
Posted by Glenn B at 10/23/2014 08:47:00 PM No comments:

And They Say Men Use Guns As An Extension...

...of their lacking manhood. Does this mean she wants to be a man. 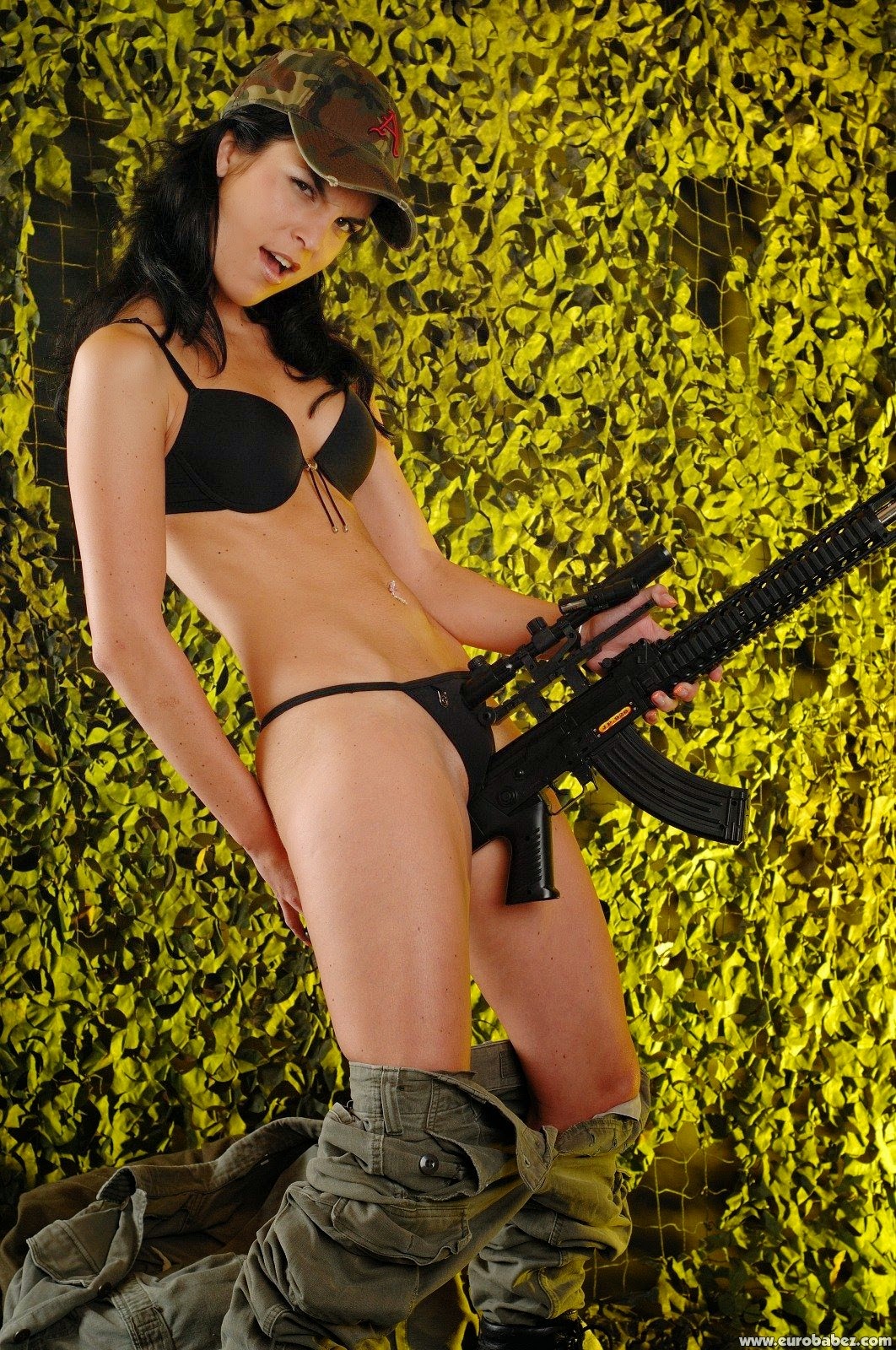 When You Wish Upon A Star...

...you had best hope you don't piss off whatever lives in the solar system where that star is located. That is unless you are hoping to get them pissed. Lately I find myself wishing that a full scale alien invasion (as in from Mars not Mexico) would take place so that we could get our minds off all of the bullshit that currently besieges us and so we actually would face something on a united front - I miss a UNITED States that much!

We can't seem to unite on any front now or so it seems. We stand divided on almost every issue such as man made climate change/global warming versus the natural course of events, gun control versus our right to keep and bear arms, unity versus diversity, true patriotism versus being a hyphenated-American, terrorism versus the war on terror, drug abuse versus the war on drugs, religion versus atheism, traditional marriage versus same gender unions, reporting the news versus using the media to push an agenda, politics such as left versus right or liberal versus conservative (and note there sometimes is a vast difference between those two sets), tyranny versus government by the People, education in schools versus an upbringing at home, justice versus injustice, police militarization and brutality versus police protecting and serving, supporting our troops versus calling them baby killers, being green versus destruction of the environment, taking responsibility versus blaming George W. Bush. No wonder that zombie movies and shows are so popular; people must secretly be wishing that they could start shooting 'the other guys' at will and that the other guys would be as easy to identify and as heinously vile as are the walking dead who, by the way, are good for nothing other than trying to take the life right out of you which is much the way we seem to see one another lately if we differ in opinion on anything. Yep, a full scale attack on earth by little green men, the Borg or Cylons might do the trick of getting us together on a unified front; well, at least for a month or three. Then I am almost certain that some large number of us would side with the aliens.