Yet another company has announced that it is leaving the Empire State upon the realization that the only empire possible within the state is the one led by the state's tyrannical governor and his vile henchmen. While NY state was once viewed as a great place to commence an enterprise, it has not been business friendly for many years - that mostly due to high taxation. Then there are the overburdening rules an regulations for businesses in NY. My guess would be that NY is surely within the top 5 states that restrict business operations of those in the so called free market, maybe the top 2 and maybe even number 1. Over the years, since my childhood, NY has lost hundreds if not thousands of businesses due to it high tax rates and its voluminous business regulations and restrictions. Add to that the most recent cog in the wheel and NY is limping along, losing yet another type of business - firearms manufacturers, distributors and importers.

American Tactical Imports (ATI) has announced that is will be departing NY and relocating to  Dorchester County, South Carolina. The move is expected to generate 100 jobs in the Summerville, NC area. It would stand to reason that the same, or a similar, amount of jobs will be lost in NY due to the move which is being described by ATI founder and president Tony DiCahrio as something that "...will help ensure a s0olid foundation for our company,"
He also said: "The people of South Carolina have welcomed ATI with open arms and we are excited about making our new corporate home there." (source)

You can bet that Mr. DiChario and his company did not feel welcome here in the Empire State under the tyrannical grip of Emperor Andrew Cuomo and his lackeys, not at least since the midnight enactment of the NY SAFE Act.

ATI is not the only company to pull up stakes and get out of NY due to the SAFE Act. KAHR arms recently moved from NY to PA - PA being a much more RKBA friendly state (source). The message that the departing companies are sending is clear:

My bet would be that others may follow soon such as Kimber and Remington.

The time for resistance, to laws filled with injustice, is now for our nation is rife with such laws and finds itself under a tyrant who espouses only more such tyranny. 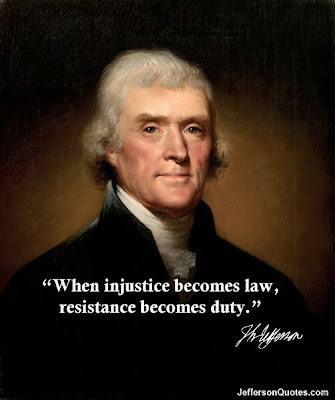