She Has A Mosin Nagant...

...and seems quite happy about it. That's a very pretty smile, don't ya think! 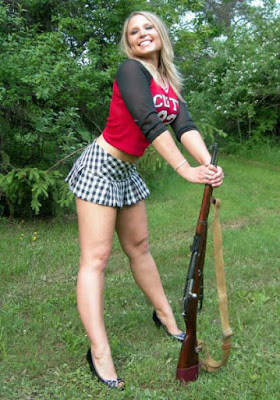 The truly sad thing is that everything in this video is reflective of our current educational system. It is also very scary to think that it might only get worse if we keep allowing it to do so. Education should in no way, shape or form ever be run by federal or state governments, including so called educators employed by the government who are little more than leftist stooges. If it keeps going like this, there will soon be no one left to put into the box.

By the way, I immediately realized that the Asian was a rainbow lover (for the purpose of this video) among many of the other things he stated but never would have guessed, in a million years, that he couldn't tie his own shoelaces. Go figure!

The only thing that would have made this better would have been to have had a second footlocker on the floor of the classroom when the girl walks into the room. Anyway, one thing is for certain - if you ignore the condition of our edjumakation cyststem, it will end - as in an end to anyone with half a brain capable of doing any independent thinking at all or in other words - real education will be terminated if it has not been destroyed already.

A hat tip and my thanks to peter Q for sending me the video.