Vic Dibitetto gets it right about a springtime scourge here in the NE. My friggin car was covered in pollen on Sunday (still is cause I am not about to wash it) and also was had lots of pubic hair from trees on it too. They stick to everything and are just about as annoying as a pube caught in your teeth but at least with the pube you know you got it by eating something you enjoyed. With all this crap from the trees all you get are allergies and a big mess.

That mind altering drugs/alcohol and gunpowder do not mix should always be considered one of the primary rules, if not THE primary rule, of firearms safety. You should not handle guns after having imbibed alcohol or taken mind altering drugs. The reasoning behind that claim is simple. Once you are under the influence, to any degree, of alcohol or drugs your judgment and your ability to pay attention to things goes to shit is incapacitated.

Your attention to all the rules of firearms safety can go right out the window, faster than a speeding bullet, if you are stoned, and that without you even realizing it. Stay safe and keep others safe too - don't drink or take mind altering drugs and handle firearms (or ammunition or its components) - otherwise the next funeral you attend may be for one of your family members or another loved one.

...or should that be goddess.

Just another thought on BBQing safely this season. Before firing up your grill for the first time in awhile, you may want to assure that the bores of the burners are not clogged with anything. I started up my grill about 3 years back and the main burner lit right up. I turned on the other burners and most of them lit right away but one did not. I walked away thinking it would light in a moment. I guess I was kind of, sort of, almost right. One of the burners must have been almost completely clogged and had gas build up inside of it. It was enough to explode once some of it leaked out and ignited from the other burner flames. Luckily for me, I was probably inside grabbing the steaks and not fucking with the grill at that moment, I imagine it could have done a number on my hands or my eyes if hit by pieces of the burner tube.

When I checked online as to why that would have happened, I found out the main culprit is usually a spider that has spun a web inside the tube of the burner. Amazingly, sometime later, when I inspected the piece that remained attached to the grill (a piece about 1/2 to 3/4 the length of it it had blown off in the mini explosion) there were the remains of a cocoon like web inside of it, like one of those that spiders build to hide inside. That stuff is tough.

It would have been cheap enough to replace the burner but that grill was several years old, quite the mess (lots of it rusted like the screws that secured the burner tubes) so I got a new grill. Now I turn them on, first without trying to ignite them, and sniff and listen to determine if gas is coming out of them as it should (and before doing so, I assure there is no ignition source nearby). If the gas is not flowing, or if a burner does not light right away (that is once I have finished the sniff/listen test), I will inspect it for obstructions. I would take them off each time to check them but it is a royal pain in the arse with my current grill.

BBQ Safety - He Thought It Was Something He Ate...

...that caused him abdominal pains. He was right but what he ate that gave him the pains was not what he had expected. Watch this short video and you may forever change the way you clean your BBQ grill before use; then again, you may also decide to chew your food better.

My thanks and a hat tip to Herr Richie M for that one.

Yet Another Woman With Her Finger On The Trigger...

...of a firearm. As usual, I just don't get why all these pics are taken with the women apparently violating the rules firearms safety (and it only is for the sake of firearms safety education that I post these photos here). So, once again, for your education as to firearms safety, I post yet another pic of what you should not do unless absolutely ready to shoot: 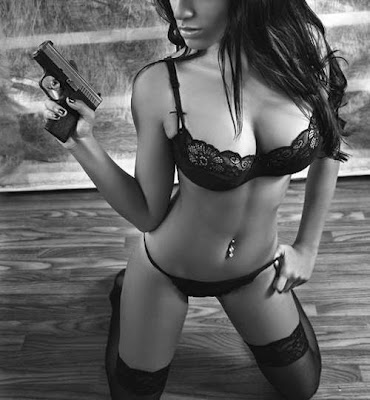 I Wonder - Was He Cuffed Hands Behind His Back...

...or did they have him cuffed in front on his way to the jail, that being after they first suspected he might be concealing something in his crack of doom. I would hope in front with a chain around his waste to which to secure the cuffs. Anyway, it has been reported, that when Darquan R. Lee was arrested last week, in NJ, police suspected something was foul when he requested to use the restroom but then refused to use it once the officers told him it would be searched before and after use. He was subsequently taken to jail and the officers advised jail personnel that they believed he was stashing something in his crack. A search by jail personnel revealed a loaded 25 caliber pistol shoved between his cheeks and apparently partially within his anus. Talk about living dangerously.

I wonder, had the pistol managed to somehow discharge while it was so concealed (which may have gone unnoticed by police until too late because the sound may have been silenced, or at least muffled, if the bore was up his wazoo), would claims of police brutality, chants of killer cops & hands up don't shoot, and race riots have ensued. I mean, could you imagine the police officers, who would have been involved, trying to explain that one and get folks to believe them. Had it gone off, I am pretty sure that there would have been: claims being made of how saintly had been Darquan, at least one town burning in NJ and several cops charged with murder or manslaughter by now.

Sources are NJ.com and The Bridgeton Police Department Facebook posting (for May 9, 2015).