...you know, that woman - Peggy Joseph - who said something along the lines that if the messiah Obama got elected as president she would not have to worry about putting gas in her car or worry about paying her mortgage because if she voted for the messiah Obama, he would help her. I imagine health care reform, to benefit bums who refuse to work yet want to suck the life out of the rest of us who do work, is just another aspect of that which she spoke about. I hope her children grow up to learn just how wrong she was in that they will have to pay for this folly but chances are they will expect handouts from the rest of us just as did their mom.

And to think, I was in church praying for, among other things, this not to be passed. Yeah - me - I went to an 8PM Compline in a local cathedral and actually prayed and meditated. Go figure. I may continue praying because this development scares me. Why? Because if they passed this by 7 votes, imagine what they will do on so called Immigration Reform, or on Gun Control, or on government control of the Internet, or on Welfare Reform, or on Increasing Taxes and on and on and on.

Spring has sprung and I missed the start of it or at least missed out on realizing that yesterday was the first day of Spring. If you are in the colder parts of the country, enjoy it as it progresses and brings with it new growth and life. If you are in the warmer climes, enjoy it before the weather gets too hot to enjoy.

Trying My hand At Cooking Lately and... 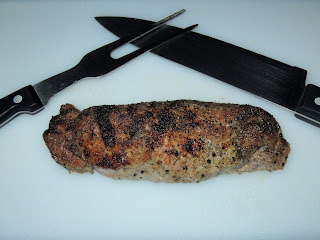 ...not doing to badly at it at all if I must say so myself. Then again, since I have been the only one eating what I have cooked, I guess I must say so myself. Yesterday I got the urge to make a decent meal for lunch and I decided to cook up a pork tenderloin roast, some potato salad and a vegetable. I not only prefer cooking simpler meals, I prefer eating them. It is not that I cannot or have not cooked things that are more complex in the kitchen. My tastes go more toward something basic to anything with fancy creamy sauces or rich gravies and the like though I will at times make them too (or used to, I have not gotten back into cooking that much yet). For now, while living here in Phoenix I am more than satisfied with plain and simple fare.

I have to tell you that my efforts at playing chef yesterday were well worth the wait, through the couple of hours of me being tortured by the wonderful wafting aromas and my salivating expectantly, while I while I prepared my lunchtime meal. There are many good things in life that we take for granted but good tasting meals are not among them, at least in my case. I have been away from home too many times and have eaten some pretty lousy food here there and everywhere, and I have seen to many people who go without, so when I have a good meal I am quite thankful for it and happy about it. If I cooked it myself it is even better. 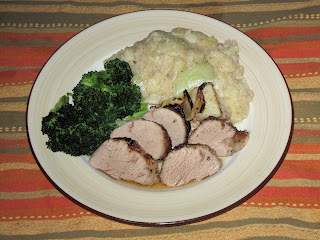 Yesterday's meal was quite delicious, and while the pictures may not do it justice, let me assure you such was the case. It consisted of a brace of salt and garlic powder rubbed, pepper encrusted, pork tenderloin roasts cooked with chunks of sharp yellow onions in the pan. For starch I whipped up a German style potato salad much the same as my wife makes at home. I used gold Yukon potatoes, a large cucumber (thinly sliced) and a fairly a large sweet Chilean yellow onion (diced). I combined all of the salad ingredients with a super secret salad dressing and must say that the end result rivaled those of when my wife prepares her potato salad (but yet was different because of the dressing). I also steamed some broccoli in butter (made in the microwave though I have made it in a covered pan or pot before). I use only butter - no water, when doing it in the microwave, and it comes out tasting divine but you must experiment with any given microwave oven so as not to overcook. It really was all very delicious and I almost cannot wait until dinner time tonight so I can enjoy some of the leftovers! Mmm-mmm good.

Of course, my meal would not have been complete without a fine tasting beverage. I decided that something pretty much icy cold would do the trick and opted for a Belgian Style Abbey Ale. These stout ales are great with hearty fare yet simple table fare and can really compliment the meal. I chose Ommegang Abbey Ale crafted by Brewery Ommegang. In this case, it was no exception that a heavy abbey ale would go well with this sort of a meal and the Ommegang was the perfect compliment to the dishes I prepared. Ommegang Abbey Ale is one of my favorite ales from around the world and believe me I have imbibed ales of nearly every description from various of countries. What may surprise you then is that this one is brewed right here in the US of A and even more surprisingly it is brewed in upstate NY near Cooperstown. In fact, it is one of my favorites among all of the beers and ales I have ever drank. It may even be my all time favorite though the jury is still out on that one because of my love for certain German weisse biers. I can say, without a doubt, it is my favorite American beer or ale by a long shot.

When I get home in April, I will start cooking there at least once a week. I think my wife might like that - especially since I have been cleaning up as I go along (much easier to do when you cook simple dishes). I know I will enjoy most of the things I cook and so will Brendan. The hard sells maybe Celina and Linda, but if it tastes as good as it did yesterday then I expect some compliments in the form of empty plates and everyone asking for seconds. I think Linda will really be surprised when she tastes my German potato salad. Time will tell.