A Natural Success Despite Personal Failure

My trip to Madera Canyon, for a hike to the top of Mt. Wrightson was not an utter failure. While I never made it to the top of the mountain, and that indeed was a disappointing failure, I did have success of another sort. While hiking I spotted at least three deer, a few unidentified neat birds (unidentified by me because I know little about birds), 55 lizards, one snake, three deer, a few squirrels and two snails. I also had a vulture almost touch me with its wing tip as it winged by out of the blue and I mean that literally it came within a couple of feet and seemed as surprised to see me as I was it. Apparently it had its mind on some tender rotting morsel down below the trail and I count my lucky stars it was not waiting on me for a meal. 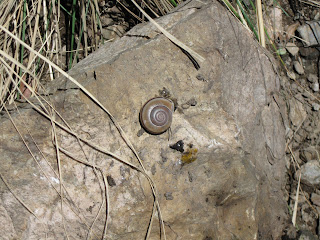 My success is not so much that I saw these animals but that I saw ones that I would venture to guess many other people on the same trail never see. This is especially true of the snails and probably at least one of the lizards I saw. I found the snail while flipping a rock looking for snakes or lizards. I was pretty surprised to find two of them under the same flat bottomed rock, I guess I was surprised because I never expected to find snails in the desert - what with their preference for damp places. These guys were no exception when it came to that preference because the ground under the rock was pretty moist - probably because it was within feet of some rainwater runoff. All were near sources of water, the water having come from the recent Monsoon rains. As for the two snails I did find, it was apparent to me they used the same rock repeatedly after going out to look for whatever it is they eat in that neck of the woods. If you look at the picture closely, you too maybe able to figure out how I came to that conclusion, it has to do with all the other stuff on the rock.
The bigger and better surprise for me was that as I was walking along, I kicked up a lizard that took off into the undergrowth adjacent to the trail. Now that is not at all surprising, heck I saw over 50 lizards just from the trail yesterday without really even having to try to find them - but this lizard was different. You see, most of the lizards I have seen on the trails at Madera Canyon have been either Yarrow's Spiny Lizards or similar species of spiny lizards. There was one Horned Toad I saw a week or so ago and that was a treat, but the one I saw yesterday was totally unexpected. It was some form of a skink. Now I wish I could tell you what type it was but I do not have a clue, I need to do some checking in my field book. I did check online but could not find any pics of a native AZ skink that resembles this one. It was brown in color with darker brown cross bands along its length including its tail. My guess is that it was about 6 to 8 inches long. It was fairly slender and at first I thought it might have been some form of legless lizard or a snake until I saw its legs. Lucky for me I was able to take the camera out of my pocket, turn it on, focus it, press the shutter release, and actually capture a fairly decent photo of it just before it scampered into the undergrowth. I was not about to follow because the slope of the hill just a couple of feet off of the trail at that point, and the looseness of the soil and leaf litter, made it too risky to try it. in addition I was in no mood to be ripped apart by thorns, and just about every plant out here has thorns - mean ones at that. (A check of my field guide revealed this was not a skink but rather an Arizona Alligator Lizard.) 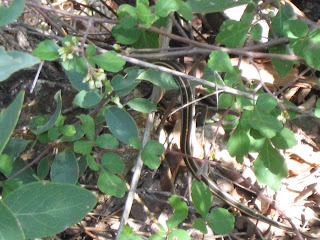 I also got to see one snake, and I also need to check my field guide to identify it. My guess is that it was some sort of Lined Snake or a Garter Snake. Whatever it was, it was fast in disappearing. So, I was not quite as successful in getting its picture as I had been with the skink. As a matter of fact I did get a picture of it, as you can see though just part of it anyhow. It was the first snake I have seen while out hiking. Based on my previous trips to AZ that is an unusual statistic, most times I see more in a shorter period of time but have had little luck on this trip spotting snakes while I was out hiking.
All in all those sightings made the whole day a rather good one for me even though I never achieved reaching the peak of Mt. Wrightson as I had hoped to do.
All the best,
Glenn B
Posted by Glenn B at 7/15/2009 01:14:00 PM No comments: