Tonight I Will Say A Prayer...

...for verdicts of not guilty in the Kyle Rittenhouse case. I do not pray often, in fact I rarely do so but if there really is a God or gods, maybe he or she or them will see me praying and figure it must be important because I pray so rarely. One can have hope my prayer (and probably many of yours relative to this) will be answered. The man is assuredly not guilty when based upon the facts. The prosecution should be ashamed of itself for not only continuing the trial after their own witnesses gave credence to Rittenhouse's claim of self defense but because it is obvious the prosecution made several attempts to force a mistrial and also made several totally bogus claims when those claims are compared to the actual evidence and testimony of witnesses.
To think, they even tried to charge Mr. Rittenhouse with a misdemeanor charge of having  possessed an illegal weapon saying it was a short barreled rifle. In fact, they had not even taken the time or made the effort to measure the barrel's length until so ordered by the judge as I understand it. When it was finally measured, it proved not to be a short barreled rifle but I guess that did not matter to the prosecutors when the charge was filed! What amazing frauds they apparently are in as much as they are supposed to be seeking justice and not to be promoting a bogus trial in a kangaroo court as it seems is all they have been doing.
All the best,
Glenn B
Posted by Glenn B at 11/15/2021 06:26:00 PM 2 comments:

Why Does The Rittenhouse Prosecutor,...

...whom I consider, in my opinion, to be nothing more than a lying unjust moronic arsehat, have his right index finger where it is in the below photo? Take a look, then think about it, it could have turned out just like the shooting on the film set in Hollyweird recently.
Besides him being what I think is a lying sack of turd he is obviously an outright idiot if in fact that was the actual rifle used by Kyle Rittenhouse when he defended himself (note the optics that appeared on it from news photos of the actual incident are now absent). 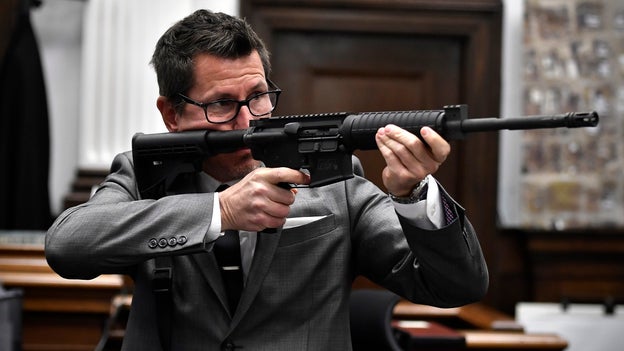 Too bad it did not have a live round in the chamber and that he did not put the bullet into the courtroom wall or ceiling; of course I say too b ad but only if he did so without hurting anyone. I am sure his carer would have ended right then and there as I think it should end. I almost cannot believe to what a moronic libtard level this guy seemingly has reduced himself during this trial. The only way he can win is if there are similar morons on the jury. If that happens, my bet is the defense will be granted a mistrial.
All the best,
Glenn B
Posted by Glenn B at 11/15/2021 06:09:00 PM No comments: