Lest those of you with dirty minds think I mean something else, allow me to clarify that I meant I took a few inches off of my sidewalk as in I was out shoveling the white stuff. I am guesstimating it was already about 3 inches deep. My wife tells me she heard there are up to another 5 inches expected to fall before it ends sometime tonight. She also said, she heard that the almost windless storm may yet turn into a nor'easter. The extra few inches of snow would not be all that bad, especially since it is pretty cold, around 22 degrees right now, and the snow thus far is pretty lightweight. If it turns into a nor'easter though, I expect drifts to pile up on our side of the street and that could make it a backbreaker since my back was already sore before I started shoveling. Right now, the back is somewhat painful but merely a bit more achy than before.

The warmed German Nurnberger Gluhewein that I am enjoying right now, with a decent dollop of Luksusowa potato vodka added for effect, should help in that department. In addition to the potential pain relief and buzz for which I am hoping, the really nice thing about adding vodka to it is that the vodka hardly changed the flavor of this truly delicious Bavarian spiced wine. By the way, this is the first time I have imbibed even a drop since last Thursday and I guess the abstinence made it taste better than I had expected. Dieting can have tasty results!

Oh well, such are the effects of Global Warming - snow in January - an aching back from snow shoveling - and some spiced wine with a dollop of added sprits to dull the pain and warm the bones. Can you imagine that? If not, then go away and never read my blog again!

I Am Going Back To Bed 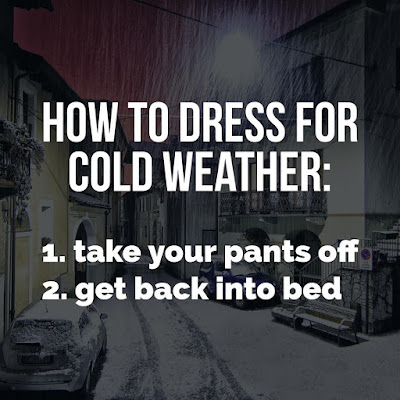 I Bet Several People Show Up Just For The Free Weed

In fact, I am willing to bet that someone will show up, collect as many free joints as possible, and then brag about it on social media. I suppose the distribution of free marijuana will be better than protesting Donald Trump's inauguration and smoking it maybe will put a damper on some of those who plan to  protest violently.

According to this published report, there is something no one wants to tell Sally Field and other celebrities, who oppose Donald Trump's presidency. I guess in essence the article makes it out to be that no one wants to tell them the fact that Donald Trump will indeed be inaugurated on January 20, 2017 as our next president by way of a legal election that worked the way it was planned by the Framer's of the Constitution. I though have something else to tell them:


You are all a bunch of immature
leftist arsehat whiners, grow up already.

I mean, wo but immature leftist arsehats whiners could have made a video like this:

By the way, someone also needs to remind the person who wrote that linked article that our form of government in the United States of America is not a democracy. Had it been a democracy at the time of the election, then Clinton would have won. On the other hand, our form of government is a Constitutional Republic (sort of a quasi-democracy wherein citizens can vote but wherein things including elections are regulated by a base set of laws known as the Constitution). Amen to that.