I received a call from my local FFL today. They let me know that an ammo order I had placed with Palmetto State Armory had been received by them. I went there and picked up the box, brought it home, opened it up and found forty 50 round boxes of Magtech 22LR ammo wrapped in plastic wrap. I figured something was not right since I was pretty sure I had not recently ordered 2,000 rounds of 22LR ammo as far as I could remember.

I checked my order and confirmed my suspicion that something was amiss because I had ordered 100 rounds of Prvi Partizan 308 Win and 500 rounds of Magtech 22LR. It seems I received an order for someone with the initials JK in MI as there was a packing slip inside the shipping box with his information and showing his order had been for the forty boxes of the 22LR ammo. Earlier today, I missed a call from a MI area code but the person did not leave a message.

I shot off an email to PSA and am sure they will take care of it. I also called JK as the number recorded on my cell was the same as the one on the packing slip. He told me he had received my order, had called PSA, they subsequently issued him a UPS label and he already went to UPS to drop off my order to return it to PSA. I hope PSA will give him something a little extra for having him go out of his way to go to UPS to return the order and because he will have to wait even longer than expected to receive his order.

I hope likewise for me from PSA and time will tell. For now, I will patiently await an answer to my email. By the way, I emailed them because I did not want to wait on hold for a long time, a thing for which PSA has some notoriety. In fact, JK told me he was on hold, I think, for a half an hour before he got to speak to someone. I can be patient waiting for a reply to an email but I am not a happy camper when I am on the phone on hold for more than  minute or two; a half hour would have gotten me pretty disgruntled.

Oh well, mistakes happen and I am sure PSA will make the return painless or at least as painless as a trip to the dentist for a root canal for me. All kidding aside, I have ordered from PSA quite a few times now and never had a problem like this with any other orders that I can remember. They take a bit longer than most to ship out orders but that is okay by me since they usually have some great prices and have excellent customer service in my experience.

You know, the perfect resolution to this issue, at least for me, would be for PSA to tell me that if I wanted it, they would allow me to keep the 2,000 22LR rounds for the cost of my original order and I could reorder the .308 ammo if I still wanted it. That way, the cost of the 22LR ammo would amount to .0627 per round (shipped). When is the last time you saw 22LR for a bottom line of $31.35 a brick? It has been awhile now since I saw it that low priced but I suppose that it is not going to happen. Yet, I can do some wishful thinking now and again.

I just thought of something else, I had to pay $10 for the FFL transfer here in NY for ammo that I was not to have received. I hope my FFL will transfer the correct order, once I receive it, for free. Otherwise, PSA will, in my estimation, owe me $10. Time will tell how it all works out.

It's Been A Long Cold Winter...

...and I can think of no way better than shown for warming up mother-nature. 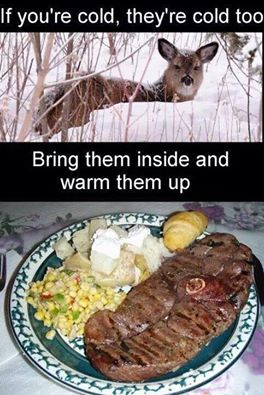 Hat tip to Rich M for the poster.

If Holding Someone At Gunpoint...

...try to remember not to basically offer them your gun and the opportunity to take it away from you. Distance is your friend and shoving your gun out in their general direction, while in close proximity to them, is ridiculous at best and extremely dangerous for you at anytime.

Officer Darren Wilson, formally of the Ferguson, MO PD was exonerated by the Department of Justice. I would have been totally flabbergasted, and convinced that our laws were nothing more than a sham, had the decision on Officer Darren Wilson been otherwise. The leftist lunatics who protested this shooting, especially those who resorted to violence, should be ashamed of themselves. Hopefully, any who turned to violence, during those protests, will be prosecuted. More info here.

I'd Bet Audubon Never Did It This Way

This video gives a whole new definition to the term "Ice Fishing"! I think that Audubon would have been impressed.


A hat tip and my thanks to Deb H for sending me the video.

...when kids could play with realistic looking toys (without getting thrown out of school, arrested and or shot by police - you know before the post-Kennedy assassination paranoia of the left) and dream of becoming secret agents when they grew up just like I dreamed back then.

How I miss those days and how I hope I instilled some of that magic into the souls of my daughter and son to someday pass onto there own children. I am pretty sure I did even if it did cost a bit more than $3.00!