Vortex Optics Get An A+ From Me

I had a pair of Vortex Vanquish 10X26 binoculars for many years. I got them from my emloyer sometime between 2002 and 2011 when I retired. As best I can recall, I got them around 2002 or 2003. Whenever, it does not really matter. What matters is that several years ago, one of the the loops built into the binocular body that holds the loop of the binocular strap broke off. Thus, no way to properly secure the binos to their strap. Oh well, I lived with it. I used this particular set of binoculars for work and after I retired for spotting game while hunting (yes the government let me keep them).

Last year, I bought my son a Vortex Crossfire II scope. At the time, I saw they had a lifetime warranty for just about anything that you did not do to them on purpose. I thought of the binoculars and seeing if they were covered but then as things went in my life I forgot all about that. Just recently I ordered a 4-12x50 Vortext Crossfire scope for myself and again was reminded of that warranty. I dug out the binoculars thinking of returning them to be repaired. I contacted Vortex Optics Customer Service; I explained how and when (more or less) I got them (as they were issued to me and I was allowed to keep them) and described the problem. They said send them in and they sent me a prepaid shipping label.

I sent them in and in almost no time, they sent me an email that said they had received the binoculars. While awaiting the return of my soon to be repaired binoculars, I bought another Vortex Crossfire II scope. I figured - why not since they were living up to their warranty of the binos. A few weeks later, I got another email saying the binoculars were on the way back to me; it was not exactly the truth but was not a lie either. I received a package from Vortex Optics today. The binoculars I sent to them were not in the box! Instead of my old pair, they sent me a letter explaining that the old ones could not be repaired. In with that letter was a brand new pair of the exact same model binoculars. To say that I am impressed would be an understatement. In truth, I am amazed. Vortex Optics just gained a very thankful and loyal customer. I am planning on buying at least two rifle scopes in the near future, they will both be Vortex Optics scopes without a doubt.

Revolution Of A Different Sort

Good morning fellow insomniacs and earthlings. I woke up this morning and looked at the time, it was 0255. I could not get back to sleep mostly because that is just the way it is sometimes but also because the mongrel Skye was snoring. I looked at Fox News and FB awhile on my phone; then went downstairs.
I thought of what to do and decided, what better to do than take pictures of my latest acquisition and show it off. It's a Sig Arms (must have been made around time of transition to Sig Sauer because it has Sig Sauer grips) GSR Revolution RCS, 1911 style, 45 caliber pistol in black stainless steel. I own only a few guns in SS but no others in black SS. It's not a full sized1911 but is a nice compact type; I think the barrel is 4 to4.5", will measure it later. It came with two magazines, the case and all papers including the original sales receipt from 2007. I had to pull of the price sticker to see it was manufactured April 6, 2007 (why seller's cover important info like that is beyond me). Anyway, the first down-payment by original buyer was made in May 2007 and he picked in up in June same year. The original price was $1049.99 plus tax; I got it for considerably less and it appears to be in pristine and possibly unfired condition. It may be the nicest looking pistol I own. I am debating making it a safe queen or shooting up a storm with it: 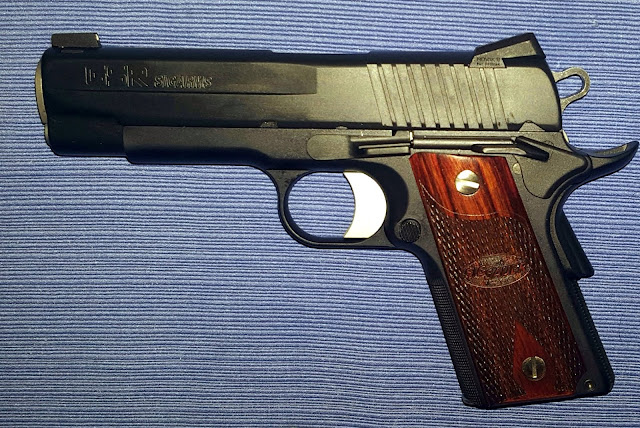 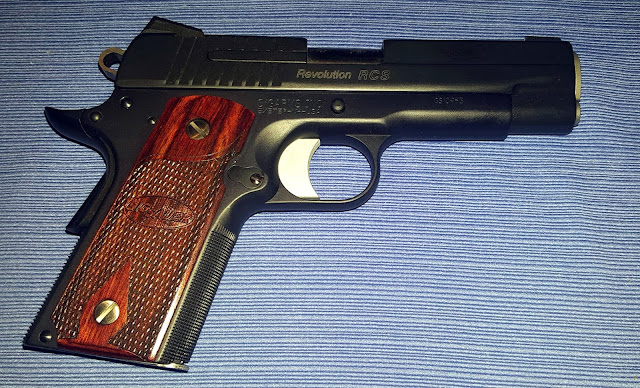 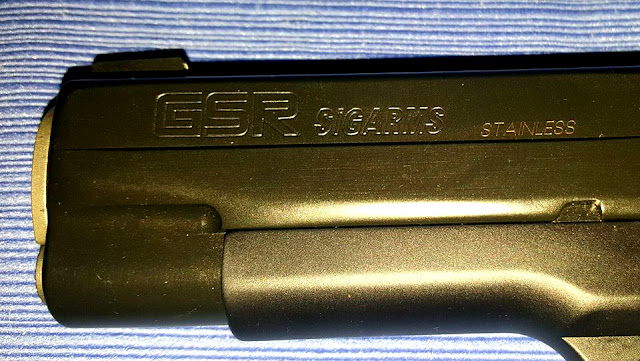 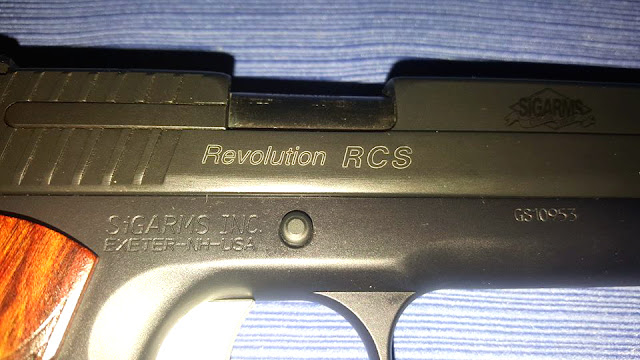 Now back to the sack; the bitch will be needing to go for a walk sometime between 0660 and 0700 and I need some sleep before then!