...that she will run for the presidency and that would be the Twitter trend:

That my friends, is excellent news.

I am not a member of Twitter but am beginning to see it could have its positive aspects after all.

It is really sad and pretty fucking disgusting that assholes resort to doing things like calling in bomb scares as someone apparently did today relative to a Germanwings flight from Cologne to Spain (source). What makes it even worse is that this come on the heels of the Germanwings disaster during which all lives aboard that flight perished.

I sometimes find myself wishing that scumbags, like the person responsible for today's bomb scare, could be subjected to old-time vigilante justice. It's something a good beating or three probably would prevent from recurring.

You Get More Than You Pay For Sometimes

As you may or may not be aware, besides being a shootist and gun rights lover, I am an avid reptile & amphibian keeper. I keep critters like Bearded Dragons, Crested Geckos and Hermann's Tortoises among others. I also keep some aquatic or semi-aquatic species of herps to include some False Map Turtles and my latest acquisitions - three Iberian Ribbed Newts. I keep some fish in with the turtles and newts and have one tank dedicated to only fish (and some snails and Ghost Shrimp).

I have been perusing the available selection of air pumps lately figuring a couple of my tanks, on the same pump, could use a stronger one that I currently have. Then today, when I went to the monthly meeting of the Long Island Herpetological Society (my local herp society), a friend/member dropped off a Profile 9500, dual output, adjustable flow, air pump with another friend/member. I took one look and said I could use that and that I would give a $5.00 donation to the LIHS for it and it was mine. It was in as new condition in  scuffed-up box. I think it was taken out of the box, plugged in to see if it worked and then put back into the box and left that way. 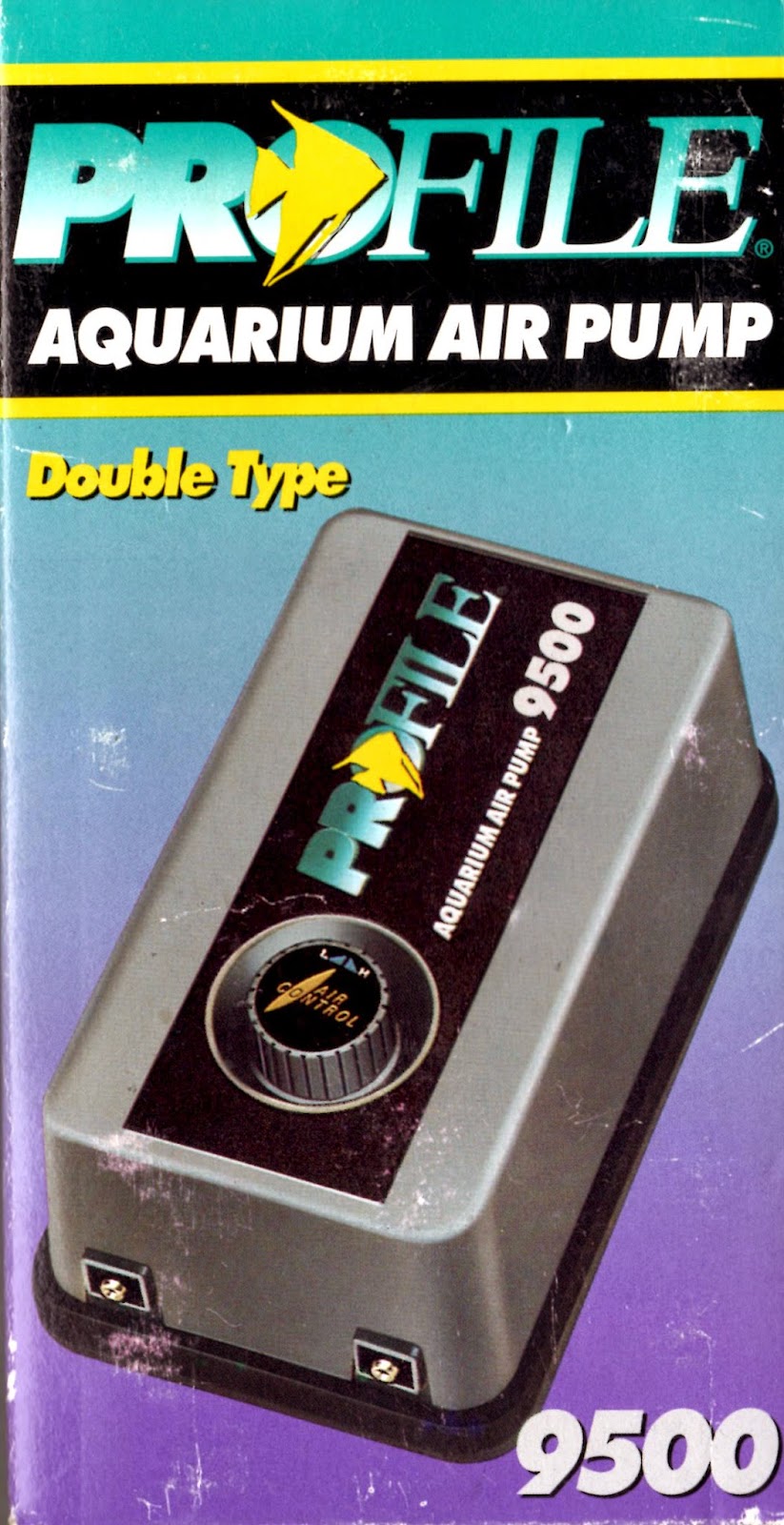 I just hooked it up to the two tanks in need of a stronger pump than the one I had on them. I am amazed at the amount of air it spews out. The air stones inside my tanks had not much more than a trickle of air coming out of them and the two internal box filters, one in each tank, were bubbling steadily but on the slower side. Once the new pump was hooked up, the air-stones were bubbling like a pot of water on the boil and the internal filters looked to be on overdrive. I had to tone the flow control down to what would appear to be about 25% output to set it to my liking. To say I am happy with my purchase is an understatement.

I did some checking on the Internet. I could only come up with one place currently selling this model. It appears that not only has this pump model been discontinued but I am guessing the company either went out of business or changed its name as I could find no products from them offered online. The place that had it listed was selling it for $26.99 and another site that showed it as discontinued said it had retailed for $29.99. Had I been able to buy it locally, with tax, I would have paid about $32.58 for the higher listed price. I guess sometimes you get more than you paid for, even when doing it honestly. I think I'll have to throw at least another $5 to the LIHS as a donation. Hopefully the company did not go out of business because these fall apart in a month and I also hope it will last me at least a few to several years.

On April 12, 1776, the colony of North Carolina authorized it's delegates, to the First Continental Congress, to vote for independence by way of the Halifax Resolves. This was an important step because for the first time in the history of the American colonies, the recommendations found within in the Halifax Resolves were not directed at a single colony but at all of the American colonies combined. Virginia soon approved similar measures and as you are aware, or certainly should be aware, on July 4, 1776 - the Declaration of Independence became this country's birth certificate of sorts and our first legal document as a free nation.

She is very good at it, don't ya think?
All the best,
GB

I Think I Am Going To Sell A Gun Or Three...

...out of those among my meager collection. I have no idea yet which one(s) to sell but could certainly use the cash. Of course, when I think of those from which I would be willing to part, only the clunkers come to mind. A bit more thought makes me realize, I just used the wrong word because I have no clunkers - it is just that when thinking of selling anything some older guns in good condition but of little value come to mind first and foremost as those to which I would only slightly begrudgingly say adieu. Alas, selling one or even two of them, maybe even three (if I have that many like that) would produce only an iota of the cash for which I am strapped. Decisions, decisions, decisions. All I can think is:

You cursed brat of an addiction! Look what you've done! My brain is melting, melting! Oh, what a world! What a world - with such decisions, decisions, decisions! Who would have thought a good little amount of debt like mine could destroy my beautiful gun collection! Oooooh, look out! It's going! Oooooh! Ooooooh!

Really now, I do need to think of something or other to sell. I have been wondering, what should it be! Along those lines, I pulled up my firearms inventory and realized - oh shit - I haven't updated my inventory since around 2012 and even for back then it did not look complete. I would have sworn I did a count of each one I had not too long ago but time flies as they say and guns sure do seem to have a habit of accumulating. So now, before I can even consider selling a thing, I find myself tasked with doing a firearms inventory to find out exactly what I still have, or have gotten new since, or don't have any longer, since I compiled the last one. Maybe it would be a good idea even if I don't decide to sell any of them. It would most likely be good to know exactly which firearms I own in the event of a theft, a fire, or some other catastrophe that might damage or destroy them and also not a bad idea to know just to be aware of what I have around. Heck, I might even find something I forgot about that is fun to shoot and will have to take it to the range. Still though, I would have sworn I did this not that long ago, it irks the hell out of me that I cannot find the inventory file, for the inventory I think I did, on my laptop.

PS: Eureka! I found a more recent inventory of my firearms; well, let me say inventory of sorts because while it lists all of my guns it does not show serial numbers. I made up a list for firearms maintenance purposes when I gave the guns a really good going over and cleaning back in April and also last June. I guess the little grey cells were not as confused as I was beginning to think they may have been there for a moment. Perhaps it would still be an excellent idea to do a complete inventory just to make sure I got them all and to write down the serial numbers and other pertinent information for all of them.
Posted by Glenn B at 4/12/2015 09:40:00 AM No comments: