As I did, for the Taurus PT-145 Millennium Pro, in my post immediately prior to this one, I am about to give my first impressions of my as of yet unfired Smith & Wesson Model 22A-1. It is, in my opinion, an unmitigated piece of $#!+ (if you can decipher that code you must be a genius) and I think Smith and Wesson should have been unwilling to have released this particular pistol for sale (and if they are all like mine then likewise for the lot of them).

As I always do, I decided to field strip mine and clean it prior to firing it. So, I read the directions as to field stripping (in fact I first read the manual in its entirety). I read the field stripping instructions a second time because there is so much redundancy about assuring you are doing it safely that I had to reread it all to make sure I did not miss anything while I was getting annoyed at all that extra precautionary stuff - and I do mean extra. I can safely say (pun intended) it is akin to one of my own YouTube videos on firearms wherein I go overboard with safety (yes I am or have been guilty of it myself). I can also safely say - that will change regards to my future videos after reading this S&W manual as I can now see how annoying it can be when someone goes overboard on safety.

Anyway, there seemingly are problems with my particular S&W model 22A-1 pistol, so much for quality control at S&W. First off, when trying to remove the magazine for the field stripping process, I pressed the magazine release button (located on the front strap - front of the grip) several times all to no avail. The button barely depressed and my finger started to hurt as I was pushing it in that hard. Finally, I took a brass punch and depressed the magazine release and there was a click and the magazine still did not come out. I had to gently pry it out while pushing in on the mag release with the brass punch. I put the other magazine into the mag well (it came with two mags) and depressed the mag release. That magazine fell free with a normal (fairly light) press on the mag release button. I tried a few more times, that second mag came right out each and every time. The first mag though, that remained a problem. So, I am guessing that the magazine is faulty.

I continued on with the takedown process. Again, the instructions were somewhat annoying but I read each one completely as I went along. The manual says the takedown button may be difficult to depress, they were not kidding. I could not do it by hand and had to use a nylon hammer head against it, with the palm of my hand depressing the opposite side of the hammer head to get it to depress. I must admit, it seems to have broken free from whatever was causing that initial freeze up and I can do it with my thumb now. The barrel assembly came off fairly easily once I got the take down button freed.

I kept following the directions exactly as they wrote them and moved onto the slide removal. At this point there was another problem. I allowed the slide to move forward until it stopped just as they show and carefully lifted the rear of the slide while moving the slide forward and the recoil spring suddenly popped out some near its forward end and had a definite bend it. An examination of the recoil guide assembly showed that the white nylon (or plastic or whatever material) piece at its rear end was stressed as if under too much pressure (which would explain the spring popping out like that). The stress marks within the plastic were clearly visible. Mind you, I will say it again, this is a new gun, in the box and unfired - and it is obviously so (in other words, this stuff should not be happening).

One other thing, while I was examining the recoil spring guide rod, that white plastic piece I mentioned fell right off with just the slightest nudge as I turned it in my fingers to look it over. Why S&W used plastic (or nylon or whatever) instead of a tightly fitted metal piece is beyond me except I think maybe that it saved them 1/10 of a penny on each pistol. Funny, on my pistol it is white plastic (nylon or whatever) but in the manual it is dark, like maybe it is made from metal. I also noted some of the parts of the frame appear to be plastic (maybe polymer) insets. I like my Glock with its polymer frame and some polymer and or plastic pieces but am none too sure of those types of parts on the S&W because the plastic (nylon or whatever) piece on the recoil rod already seems damaged and the gun is unfired and new from the factory.

I suppose it is needless to say but I will say it anyway, I am not too satisfactorily impressed with this pistol, in fact I am somewhat disappointed. Anyway, it has been cleaned and reassembled and is ready for the range. So, I will bring it along this weekend to the Seventh Annual Northeast Bloggershoot, hopefully for some shooty goodness this coming weekend. (I hope it actually fires and functions alright.) Maybe after some use, that magazine that was not dropping free will come out as it should when the mag release is depressed. I will do a review of how it shoots sometime after that. I will also probably contact S&W about what seem to be the existing problems and will clue you in, at a later date, as to how they respond. Hopefully mine is just a fluke.

Political Humor Mirroring The Feelings Of Our Time 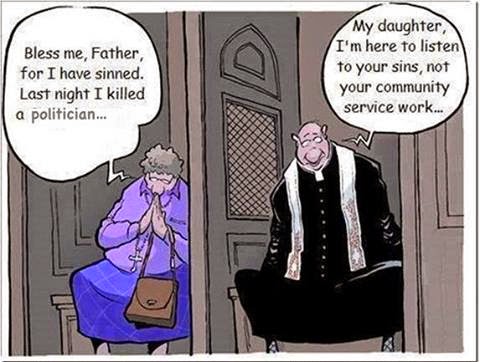 It was on July 28, 1914 that the first hostilities of World War One commenced. That means that yesterday (pretty much still today for me since I am still up and about) was the 100th anniversary of its first hostilities. The first artillery salvo of the war was fired on Serbia by the Austro-Hungarian Empire in preparation for an invasion of Serbia to avenge the death of Franz Ferdinand, the heir presumptive to that empire, and his wife Sophie who was assassinated in Sarajevo by a Yugoslav national, Gavrilo Princip, exactly one month before on June 28th.

The irony of WWI was that when it commenced it was thought by the most of involved world leaders that it would be over quickly, within months at most, with minimal losses. The war lasted until November 11, 1918 and was one of the bloodiest conflicts ever. There were 38,880,500 military casualties consisting almost 10,000,000 dead, 7,750,000 missing in action and almost 21,220,000 wounded in action. Those were only the military casualties (source).

It is often referred to as the first modern war and many of the weapons we use in warfare today were first used in battle in WWI. Those weapons included large scale gas warfare, the tank, the submarine fired torpedo, the depth charge and so on. Read about it here or at any of the many available websites covering it or in many more books published about the War to End All Wars.