I recently ordered 500 rounds of Wolf Military Classic, 7.62x39mm, HP ammunition from Sportsmansguide.com. The order arrived yesterday. When I opened it up, I was surprised to see what was either new packaging for Wolf Performance Ammunition brand ammo or counterfeit merchandise. Nowhere on the ammo boxes was the Wolf name in evidence, instead it was marked WPA. The printing job on the boxes looked inferior to that of the older Wolf ammo packaging, some of the printing was smeared. I opened one box and took a look at the rounds. The case heads were not stamped with the WOLF logo as has been the case in the past. While the case was indeed stamped with the round size designation is was almost illegible. There was also another unfamiliar, to me, marking on the case head and that too was basically illegible. It seemed that the stamping was done very weakly and that quality control must have faltered or maybe it was counterfeit product.  All the alarms went off and I shot an email out to Sportsmansguide last night. They responded today saying they were certain this was legitimate Wolf ammunition and they cannot account for changes to packaging or changes to how ammunition is manufactured by Wolf. They reminded me they do not accept returns on ammunition unless defective. Oh did I forget to mention the defect - there was no red sealant between the primer and the casing, I did not forget to mention that in my email to Sportsmansguide. That to me is a glaring defect in any currently manufactured military ammunition.

I also contacted Wolf ammunition with an email through their 'contact us' link. They too got back to me earlier today telling me: "This is a troubling issue that he would like to speak to you about on the phone." So, I gave them a call. The representative I spoke to at Wolf assured me that the packaging is their new look. He also told me that they no longer place sealant around the primer. When I asked 'why not', he said this was due to a decision at the new factory that Wolf is using to produce the ammo. He gave me the name, someplace beginning with a B, maybe Baikal, in Russia I think since it says made in Russia on the boxes. I asked why they would do that and at first he said he did not know, then he said probably because they have received complaints from customers who claim the sealant makes their rifles jam. Probably the same customers who fire a several hundred rounds through their rifle without cleaning it properly, then expect it to work well on their next range trip a month or two later. When I also asked about the lack of the Wolf logo on the shell casings, the rep said the new mark is that of the new factory but that will change to the Wolf logo sooner or later. He said they were using this factory to increase ammo production because this ammunition was so hard to get. As for me I had not known of a recent shortage, did you?

When I addressed the very poor quality of the stampings on the shell casings, he sort of side stepped the question just saying that the logo that was on the shell casing is that of the new factory they are using. My guess is that by new factory he does not mean a newly built manufacturing plant but does mean Wolf's new affiliation with said factory. After me expressing my concerns about quality control or the apparent lack of it and my concerns over whether or not this ammo will be suitable for long term storage without primer sealant and my concerns about whether or not it will be safe to shoot - he assured me this ammunition is good for long term storage and is safe to shoot as it is 'high quality Military Classic Wolf Performance Ammunition'.

Furthermore, he said if I shoot it and have any problems, I can return it to Wolf because they have a 100% satisfaction guarantee. If I have any problems when I shoot it, heck that might be too late if one of the casings ruptures! Babbling Businessmen Batman, I had been on the phone with him expressing my dissatisfaction with this ammunition for about 10 minutes already - how did he miss that. Anyway, as it turned out, I told him I would give it a shot. After I hung up, I gave some more thought to the conversation I just had with him and about what seems to me to be strong signs of reduced quality of Wolf Military Classic ammunition and I rethought whether or not I should shoot this stuff. I then sent off another email to Wolf, this time with the following scanned image:

Now remember, this is a scan of the shell casings. They are both directly on the glass of my scanner. I know this is not as good as a crisp photo taken with a great camera but I do not have a great camera and I am pretty sure I could not focus my now falling apart older camera well enough to get close in like that. Still you get a good comparison of an older Wolf Military Classic casing with a new one. Note, the scanner should have focused equally on each since both are right next to each other and directly on the glass so any fuzziness on one is equal on the other. The poor stamping quality thus is evident on the newer round.
Those casings are only about the width of a shell casing apart. The older Wolf Military Classic ammunition, the stuff I think had higher quality is the one on your left. It clearly shows the WOLF logo stamped into the casing and also clearly shows the cartridge size. The one on your right is the new Wolf ammunition that I received from Sportsmansguide yesterday. It is typical of all the other rounds in the box in which it had been packed. I do not know about you but I think that the stamping quality sucks. I cannot even read the number 7 in 7.62 and the rest is difficult to read at best. In addition, you can clearly see that the sealant is absent. They may call this ammunition Military Classic but there seems nothing military or classic about it to me. Military ammo is known for having sealant around the primers. Along with the picture, I sent my reiterated concerns and I also asked Wolf a question. I requested that, after objectively looking at the scan, they answer this one question for me:
Is what you see, in the shell casing without the sealant and with the poor stamping, really high quality Wolf Military Classic ammunition?
I am awaiting their reply but somehow I get the feeling that, even if they wind up exchanging this for something of higher quality, my future purchases of Wolf ammunition may be curtailed until it is apparent that quality control has returned to the level at which it had been with Wolf ammo in the past.

Lest anyone think that the single shell casing above was a fluke, I decided to scan all 20 rounds that came in one box of this ammunition. Here is that picture: 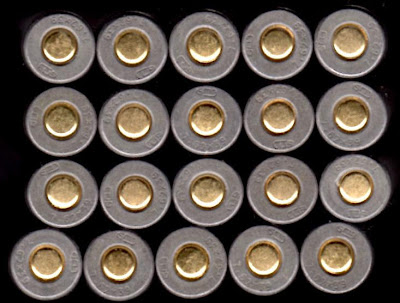 Again, I cannot speak for anyone else, but to me it looks as if Wolf quality control, at least at the new factory with regard to this lot of ammo, has been flushed down the toilet. Once I hear back from them, in reply to my last email, I will give you an update. I truly am hopeful that they will up the quality of this stuff and that they will go back to placing the sealant around the primers again. Wolf Performance Ammunition, Military Classic or otherwise, had always been a really good buy, in my opinion, because it was a pretty high quality product. I'd love to find out the manufacture of this lot was just a temporary aberration and see Wolf keep up the quality for which it was known to me before I got this particular ammo.

People Can Be Idiots - Just Too Funny Not To Share

Man some of them were truly idiots, others maybe just had bad luck.

I just checked out the new look for the Blogger interface. it sucks but that is what you get when you use a free service and Googlephiles ruin it.

Luckily I was able to get back to the older format. They say it is coming in April, hopefully it will not be forced on us. But if so, oh well...