Grandmas - Some Knit And...

...others, well others are into other things: 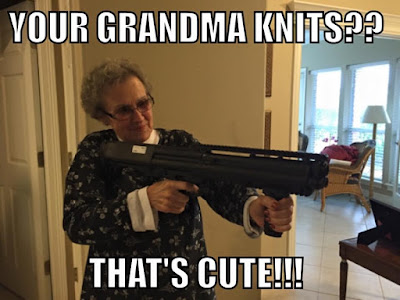 Some In GOP Seek To Remove Trump From Republican Party

According to this article, in The Wall Street Journal, Joe Lhota, the 2013 GOP mayoral candidate, wants Donald Trump thrown out of the Republican party. Others want likewise. Aren't the ones who want to throw Trump out of the Republican party the same as the Republican arsehats responsible for allowing Michael Bloomberg to run as their candidate, for mayor of NY, but only after he flatly stated he had almost zero Republican values? I am almost certain they allowed him to run as a Republican twice and that they said what mattered were not his principles but that the party could win. Third time, he 'ran' as an independent; not because the GOP threw him out but because he decided to run as an independent.

True, Trump historically has not been a conservative on many issues. Yet, he seems to address issues head on and with a vigor long absent from others in either party while disregarding political correctness and while seeking to do what he believes is best for America. Maybe the GOP does not get it, or maybe they do, the more the RINOs yammer and gnash their teeth about him, the more votes of disgruntled voters they push his way. For example: Jeb Bush's recent claims that Trump is not conservative are laughable considering the source and his own lamentable record and candidacy. Jeb Bush is, at best,  just another weak kneed RINO. The more he jabs, the higher Trump's ratings go. So, it makes me wonder, is the GOP really wanting to get rid of Trump or are they trying to boost his ratings by turning Jeb Bush on him. Regardless of what the people who run the GOP think, the old Republican base (conservative Republican voters) seems ready to look for a new type of candidate to support, if not for a whole new party.
I do not like Trump's historical set of politics for the most part but I care for, even less, the politics of RINO's like John McCain, Jeb Bush, George W. Bush, Chris Christie, and  Marco Rubio just to name some recent and historical RINOs who all claim to be representing the conservative base that once was the Republican Party. I dislike them so much that a couple or few years back, I dropped out of the Republican party. On the other hand, I absolutely detest the politics and principles of leftists like Clinton and Sanders. I can actually see myself voting for Trump.
Ironically enough though, should I cast a vote for Trump, I might indeed be casting my vote for someone who is a RINO. However, there is a difference between him and other RINOs. The difference being that he seems to have the courage enough to stand by his political convictions and that those convictions have, at least as of late, been molded to fit a new form. That form might actually fit in nicely with many of my political views and likewise with those of many who were once considered the base of the Republican Party. Regardless, many of his ideas address the problems we face, do so directly and forcefully, and in all likelihood are better than almost anything offered by other candidates who tiptoe around political correctness, indecision and ineptness. If nothing else, many of the things he promises to accomplish are those that the left and right have been promising for years then give one excuse after the other (the left blaming the right and the right blaming the left) for not getting done. Whether his plans succeed or fail, Trump is a man with a history of taking command and doing what he has planned to accomplish. In other words, he is not merely a political bag of hot air.
I seem to remember that, within my lifetime, there was another man who was not a Republican for much of his political career, who had been on the left but who grew up and came over to the right because he loved his country. That man became the best president within my lifetime to date. If Trump gets the Republican nomination, then one can dream that - The Donald might be half as good as that other man. If you need to ask whom I mean, you had best not vote at all.
All the best,
Glenn B
Posted by Glenn B at 1/09/2016 12:36:00 PM No comments: