ISIS Threatens Obama And Worshippers Of The Cross...

A miserable death to all ISIS goat fuckers could come none too soon as far as I am concerned.

I Was Never A Law Enforcement Buff...

...and throughout my 32 year plus LE career I did not collect all that much memorabilia. Yet, when I was going through a box in my garage today, I did find some patches and a few pins. They almost all bring back some good memories.  found a total of 8 LE patches and 9 pins. Four of the pins were given to me to commemorate my years of service in either the Customs Service or the federal government. I have 10, 20, 25 and 30 year pins. They are probably worth all of about $1.79 apiece (at most) monetarily but do have a small bit of meaning for me. The other four pins were all given to me by LEOs, from other agencies, with whom I worked on cases. I have one from DEA, another from the Secret Service (for a SS protective detail), another from the Las Vegas Metropolitan Police and the last one is from Her Majesty's Customs and Excise Investigation Division (I'll be damned if I can remember what case that was regarding). My favorite pin is the one I got along with a Commissioner's Unit Citation for my part in a major investigation in Texas.

The few patches I have are imaged below. 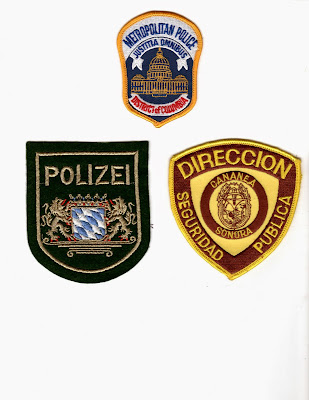 Once upon a time, I also had a Haitian﻿ Immigration patch but I have no idea what has become of it. After spending 30 days in Haiti and giving away numerous U.S. Customs patches and other memorabilia I was given a single patch that an Immigration officer had pinned to his uniform shirt. Had I been a collector, I imagine I would have traded instead of giving things away.
I also found a photo album of some photos from my days in the Border Patrol. Only a couple of shots of me and some of the borderline, some Mexican yutes I dealt with back then and some illegals. Oh yeah, there were a couple or few shots of the cattle feed lots near town. I sent that album to my great-grandfather who loved it.
I do have some other mementos from my service, a raid jacket or two from the Customs Service (I think I still have the one I wore the night and next day that I helped on the dig at the WTC), an expired official passport, an identity card from Haiti that ID's me as basically untouchable by Haitian LE while I was working there, and a plastic jar full of burned off and soot covered melted ammo from the Customs Range at 6 WTC (that was recovered right after 9/11). Then there are my certificates of achievement, firearms instructor certifications, award plaques and letters of commendation and such. All worthless, I guess except to me. I suppose someday, I'll pass them all to my son - he can use them as targets, burn them or cherish them as he chooses; I would hope for the latter.
There are some I never got that I would like to have gotten. I tried to get my cancelled credentials from my time flying as a Federal Air Marshal right after 9/11. They did not even give us volunteers a letter of appreciation (what a scumbag administration they had - at least at the time); I did get a letter of commendation, in fact two, for my service with the FAMs but those letters came from the Assistant Commissioner of Customs (I was a Customs Special Agent at the time). Out of the hundreds of agents in my office, I was the only one either stupid enough or crazy enough (or both) to volunteer for that duty. Never saw even a single terrorist on any of the flights I flew, and I flew on literally hundreds of flights, but I was ready for them even if scared shitless at the prospects of facing them down and taking them out.
About the only other tings I have, that come to mind, (and I may yet have a few more than this) are a U.S. Customs wall plaque, a toy bucket and shovel from a tiki bar in Clearwater Beach, FL (some great zombies came with that bucket and sure got me drunk while on a SS detail - on my free time), my retired credentials from DHS and my cancelled creds from Customs when we converted to DHS. I imagine most others I worked with have larger collections of collectible mementos than me, as I said I was never much of a collector of LE memorabilia and never was a buff.
Oh yeah, there are a few other items that have come through my career with me, like my Beretta 92SB and two Beretta 92FS pistols and my Glock 26 as well as my Remington 870 Express shotgun. I carried them all on official duty at one time or another. If my son likes or does not like my other memorabilia, I know for sure he likes those firearms! Of anything I saved throughout my career, those are certainly my favorite mementos.
All the best,
Glenn B
Posted by Glenn B at 5/17/2015 04:00:00 PM No comments:

...or are they back tits or maybe I should call them backsicles cause they sure don't look like breasts to me and do look more like something else! 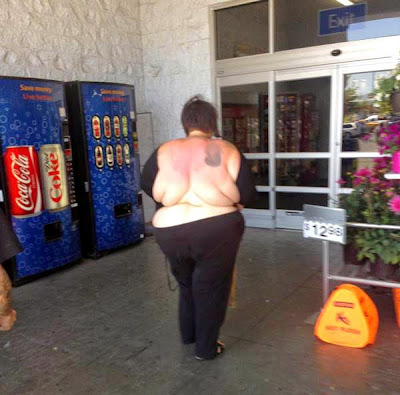 Allegedly a photo of a Walmart shopper (source).

...what could be a better life than that for an older man in his 70s? I guess it was only as good as long as it lasted now that one old geezer reportedly has lost his housing subsidy after it was discovered that he had a whore hiding under his bed and had been paying for hookers with money he made by running booze to other elderly folks in his assisted living compound (source). Way to go gramps!