...how could Jay and Kateri Schwandt expect anything other than boy children. Yet the Schwandts are at least somewhat hopeful that their 13th child, due this Saturday, will be a girl. With all due respect and meaning absolutely no disrespect, the Schwandt's name is, when in the plural form, at least in my opinion, pretty similar to the German word 'schwanz' meaning tail. It is also slang for penis. It's almost as if they have been predestined to have an all boy family by virtue of their name. They say they would be shocked if the latest addition to their family is not a boy but it seems they would gladly welcome a girl. More here.

The Most Hated Man On My Block Could Become Me

My neighbors may be about to hate me and so too my family if we don't get a good day or three of soaking rain soon. I tend to think it will be that I wind up the most hated man on my block this spring since rain is not forecast until Tuesday. Even then, they promise only a 50% chance of it. I guess that means I will be watering the backyard frequently over the next few to several days and quite possibly will throw more lime on it as I did just a few minutes ago because man oh man does it smell like shit back there. We had a bag of chicken shit fertilizer out back and it was left out for a year or more. Well, today, when cleaning up some back there, I grabbed the bag and out tore and fell all of the chicken poop that had looked like small pellets or granules once upon a time. Today it was no more than a rotten, rancid, putrid, smelly, foul, odiferous pile of sludge - about 10 to 15 pounds of it.

Calling it "no more" than anything though is a gross under statement. It truly will wind up stinking all the way up to high heaven and that means there is a strong chance of it wafting through and odorizing all the yards, houses and noses anywhere in the near vicinity depending on which way the wind blows it. Right after it happened, I wondered: 'what can I do with that pile of malicious muck'. I figured I could dump it in a trash bag and leave it for the sanitation men. Then I thought better of that because I also figured out that they probably do not appreciate collecting sacks full of fetid feces along their route. Anyway,  I thought it might be a potential health hazard in that high of a concentration.

So, I did the best thing I could think of, I tossed shovels loads of it around my yard under several bushes. Then I hosed it down really well with lots and lots of water to spread it and to let it seep into the soil and dissipate. Then I threw some lime over the places where I had just piled and spread out the disgusting dung and then watered it well once again.

I am thinking that my method of 'stink-be-gone' will have worked within a couple to few days at most. So, I am hopeful that, none too soon, most of the aroma will have wafted itself away to nothingness and my yard will again be scented more like heaven than like hell. As for spreading it around in the yard, to dispose of it, what else should, or could, I have done with it? I mean, it is fertilizer, after all, isn't it! With any luck, I will not have fertilized my bushes to death.

A Small Legal Step In The Right Direction

As I have always believed, the government cannot investigate anything unless there is a specific reason to investigate. Thus they cannot choose to follow you around just to see if you will commit a crime and then arrest you, that is without first having legally justifiable cause to do so. In other words, they must at least first suspect, with reasonable cause, you are involved in a crime in order to investigate you. Under that concept, the Second Circuit Court of Appeals has ruled to mass collection of telephone records data by the NSA to be  unconstitutional. One can only hope that small step will go even further and be applied to things like police drones performing general surveillances, or to the police using license plate readers on every vehicle's plates they can capture. The court did leave open the possibility that Congress could enact legislation allowing such  investigations to combat terrorism and that is a scary way out that the court has possibly handed to LE for mass collection of evidence on everyone. Still though: "The court said federal law permits gathering information only when there's something specific to investigate. By contrast, today's ruling says, the government is storing huge amounts of data so that it can be searched later when the need arises." and as I said that is a small legal step in the right direction. Source.

The Old Prospector (a fable with a moral or five)

I found an excellent fable of sorts today and figured it was so good, and conveyed some truly important lessons, that I decided to reprint it here for purely educational purposes. 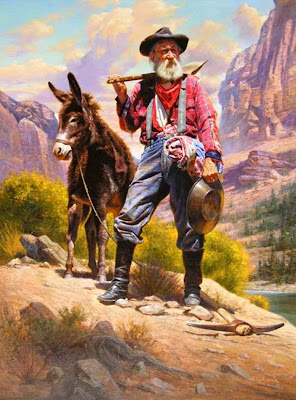 "An old prospector shuffled into the town of El Indio, Texas leading a tired old mule. The old man headed straight for the only saloon in town, to clear his parched throat.

He walked up to the saloon and tied his old mule to the hitch rail.

As he stood there, brushing some of the dust from his face and clothes, a young gunslinger stepped out of the saloon with a gun in one hand and a bottle of whiskey in the other.

The young gunslinger looked at the old man and laughed, saying, "Hey old man, can you dance?"

The old man looked up at the gunslinger and said, "No son, I don't dance... never really wanted to"

A crowd had gathered as the gunslinger grinned and said, "Well, you old fool, you're gonna dance now!" and started shooting at the old man's feet.

The old prospector, not wanting to get a toe blown off, started hopping around like a flea on a hot skillet.

Everybody standing around was laughing.

When his last bullet had been fired, the young gunslinger, still laughing, holstered his gun and turned around to go back into the saloon.

The old man turned to his pack mule, pulled out a double-barreled 12 gauge shotgun and cocked both hammers.

The young gunslinger heard the sounds too, and he turned around very slowly.

The silence was deafening. The crowd watched as the young gunman stared at the old timer and the large gaping holes of those twin 12 gauge barrels.

The barrels of the shotgun never wavered in the old man's hands, as he quietly said;

"Son, have you ever kissed a mule's ass?"

The gunslinger swallowed hard and said, "No sir ... but ... I've always wanted to"

There are a few lessons for all of us here:

* Whiskey makes you think you're smarter than you are.

* Always make sure you know who is in control.

* And finally, Don't screw around with old folks; they didn't get old by being stupid." Source.

As I said, some good morals to be learned!

...a Beretta 70S in 22LR. Note, I am not saying that mine has a threaded barrel that can accept a suppressor or anything like that. Even if it did, I sure wouldn't be posting about it online in a blog or via social media. One can dream though.

While I might be dreaming about have mine outfitted just like this one, I can assure you, I would not be out robbing anyone with it.
All the best,
GB
Posted by Glenn B at 5/07/2015 09:39:00 AM No comments:

A snorkeler, in the Colorado River in AZ, came across what looked like two skeletons in lawn chairs while on a dive recently. He reported it to authorities who then sent a dive to investigate. What they found were two fake skeletons secured to the chairs and the chairs tied to rocks. There was supposedly a sign on at least on of them indicating they had been placed there in August 2014. (Source.)

I would have guessed the giveaway that they were not real was that the skulls were still attached and that at least one was reportedly wearing sun glasses. Besides that they sure looked comfortable.

Yes, it wound up wasting the time of the police and wasting tax payers' dollars but it was one hell of a practical joke. The police have said that they may place them on display, in front of the sheriff's office, as a joke. It shows that yes indeed - people can still have fun without getting arrested. I almost wish I had thought of that one.