Take some time today to remember and honor those who have fallen while honorably serving in our military during times of military conflict. They deserve at least that from us.

The Old Man & The Fisherman

Seems it was the old timer's turn to be taught a lesson by his son the fisherman yesterday. We rented a canoe and fished Lake Lucille. The skies were clear when we hauled off the shore and paddled across calm waters to the far side of the lake.

This is no Robert Ruark novel so I will get right to the fish catching. Brendan had the first strike, maybe half an hour to 45 minutes or so after we wet our lines. Shortly after that he hooked his first fish. It was a decent sized Rainbow Trout. About 10 to 15 minutes later, he had another. He was using a small yellow spinner as was I. Two for him none for me. 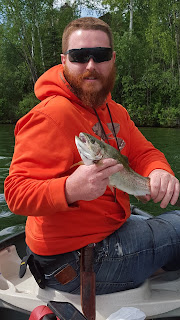 He got yet another reeled in, a third trout, and I still had none. Then, after another break bin the action I finally hooked one. It gave quite the fight for what was maybe a 2 to 2.5 pound fish. Got it in and back in the water it went, as did Brendan's too. We forgot some way to keep em fresh. Oh well. 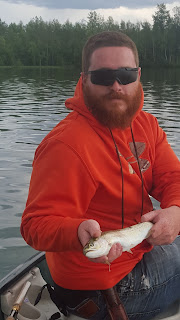 Then things slacked off for an hour or so. We had a few strikes by small trout in that time. We watched one at boat side repeatedly striking my lure but the hook was too big for it (I had switched my lure ttrying to catch a much larger fish).

We paddled here and there and fished more as rain clouds accompanied by a single echoing blast of thunder closed in on us. We decided to head back to our starting point but stopped within a short paddle to shore and tried our luck one last time. After a few casts Brendan hooked and brought in his fourth trout of the day. Moments later the rain started go fall. Within about 20-30 minutes it was a downpour with lots of booming thunder but no lightning that we could see. By then, we had already dragged out the canoe, called in for pick-up, had it hauled away, paid for the rental and headed to Walmart to get some things for our next canoe/fishing trip.