Stabbed Officer Gets Up And Chases Her Attacker...

...but for the life of me, I do not understand why she did not shoot him instead of chase him. The guy just tried to kill her but luckily her body armor helped deflect several stabs; yet, she received two stab wounds one in an arm ad the other in a shoulder (source). Did she not shoot him because both arms were disabled from the wounds; I doubt it since she was treated and released from the hospital - so again - why did she not shoot him. He was an escaped violent felon - a lifer. He had just stabbed her. He was fleeing and to anyone except maybe an ultra-liberal - he should have been seen as posing an imminent threat of loss of life or serious injury to anyone he encountered. Hell, he even tried to enter a school shortly after stabbing the officer - imagine what mayhem could have taken place had he taken refuge therein with children inside! Luckily he did not run over to the school's playground, where children were at the time, and take any hostage.

What was the officer thinking. Her boss calls her brave to have chased him and I guess that is so but I also wonder - was she afraid of shooting him and the outcome she might have to face had she done so. I believe that the leftists and lawyers (pretty much one and the same) in this country have police second guessing what they should do in such situations and sooner or later the outcome will be a chilling one. I also believe that may be the case (second guessing and uncertainty on the officer's part) here but that is just my guess. For all I know, she may not have fired because the children were in the path of any shot she could have taken. I hope that is the reason and not the other I just more or less surmised.

I Find The Strangest Oddities In The Woods

I was stealthily walking through the lightly snow dusted woods a couple of weeks ago, hoping to bag a deer, when  came across something I have never found in the woods before. From a distance, it was at first what appeared to my eye to be nothing special if maybe a bit odd as to its location. As I drew closer though, I noticed a hole in the middle of it. I thought maybe it was an Indian artifact or something left behind from a bygone era of industry in the area. Then again though, the odd placement of it almost certainly ruled those things out.

The closer and closer I came to it, my little gray cells were left with pretty much one and only one idea of what it might have been and that was it had been someone's target. Still though, that was hard for me to believe because it would have been an odd choice for a target if not unique. Yet, it sure looked as if it had been used that way. Again, that was considering its placement because surely rocks do not naturally jump up onto the tops of fallen trees as this one had been placed. I made a bit of a detour from my chosen direction and headed over to it to take a better look. 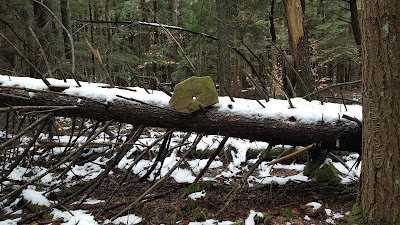 As I got closer, I was almost convinced someone had taken aim at it and put a hole right through it even though I would have thought that would have resulted in it having been shattered into hundreds of pieces. This stone though﻿ was intact except for a fairly clean hole through its center from what I could see as I walked toward it. I kept trying to reason why someone would use a rock as a target and trying to rationalize that I must have been wrong in my assumption by thinking so - and I thought "no, it must be a drill hole". The closer I got though, the more I thought it was a bullet or slug hole, again based a lot on the stone's positioning. 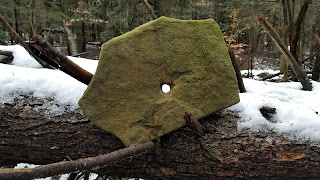 An up close examination of the front of it and then of its back convinced me - the hole had either been made by a bullet or slug and I am guessing by a bullet from a high powered rifle; I think a slug would have shattered the stone and only a rifle bullet make as clean a hole but who knows. On its backside, it looked like an exit hole that a bullet or slug would make and that is what convinced me it had been used as a target. Now, am not﻿ a stone mason, don't know much about drilling holes though stone, but figure had that hole been drilled the exit hole would have been much cleaner - heck even the entry hole would have looked tighter. Anyway, why on earth would someone drill a hole in a stone like that and then perch it on a tree in the middle of a forest? It was on state land, during deer hunting season, and a lot of once a year shooter types were out and about and one of them forgetting to go to the range to sight in his rifle and still needing to do so once in the woods seemed the more likely cause. 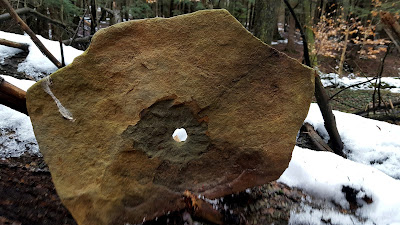 ﻿
So, I cannot imagine this was anything other than a target, a one shot one at that. I guess whoever shot it must have thought his (or  her) rifle was sighted in properly. Something else I cannot imagine is me, my son, or any responsible hunter (or other gun owner) going out into the woods and setting up a fairly thick rock as a target. This was not a thin piece. The pen, used for scale, in the below photo is approximately 5/16 - 11/32 of an inch wide. The thickness of the stone was about 2 3/4 to 3 times as wide as the pen at center. That makes it about 1 " thick - more or less at center. 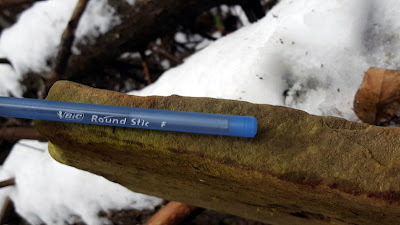 I can think of plenty of better things to shoot at in the woods as a target.﻿﻿ Stumps of long dead trees (never shoot at live trees due to ricochet potential) immediately come to mind. Old plastic bottles or old soda/beer cans. Those last are not in abundance in the woods but with a little looking you can find one or more left behind by slobs. If not  out in the forest then a short walk back to the road, this stone was only a couple hundred or so yards from the road, would have you pretty easily find a can, bottle or other piece of trash more suitable as a target.

I imagine maybe someone dropped his rifle and was concerned if it was still zeroed, or as I said above may have forgotten to go to the range before going afield, but I still see no good reason to use a rock as a target. As for taking one shot, one shot does not tell all. It could have been a fluke but if the shooter knows his or her abilities it might have been enough to let him or her know the rifle was still zeroed - unless of course the recoil of that first shot changed that. Regardless of why the person needed or wanted to take a shot - a friggin rock was not a good choice of target. I think that even Elmer J. Fudd would have known better.