I think I got it right this time and the winners of the team Glenn B Kilted To Kick Cancer raffle are:

First Prize:
# 54 Hubert Kostron
300 rounds Winchester 22LR ammunition in wooden collector’s box.
Box of FMJ 9mm ammunition.
1 lb. of Hunters Reserve Roadkill Summer Sausage (no it is not really made from roadkill but is made from meat like venison and elk).


Fifth Prize:
#80 Maria Rey
Magic Eight Ball (What better and fun way to tell your future could there be?)

...kind of, sort of a list of the winners, except for the fact that I screwed up and shortchanged two donors some chances to win. Think I have it straight now, am waiting for confirmation from those who donated that it looks right, once I get that I will redo the drawing.
﻿
First Prize:
#59 Tim O’Brien
300 rounds Winchester 22LR ammunition in wooden collector’s box.
Box of FMJ 9mm ammunition.
1 lb. of Hunters Reserve Roadkill Summer Sausage (no it is not really made from roadkill but is made from meat like venison and elk).


Third Prize:
#112 Frank Dominguez
$50 gift card for Friendly’s Restaurants (If you don’t live on LI, let me know and I can sub another gift card for this one.)

Fifth Prize:
#145 D.J. McSweeney
Magic Eight Ball (What better and fun way to tell your future could there be?)

Could you imagine a politician today not only saying that but living by it? I certainly could not but Rutherford B. Hayes, born on this day in 1822, said it at his presidential inauguration and despite not being considered a very effective president he tried to live it too. More on him here.

In addition, today was an important day for another reason, much more important than most any of us probably realize. On October 4, 1636, the first legal code written in North America was instituted by the Pilgrims of Plymouth colony. It was an extremely important legal code that would help mold our Constitution in as much as it guaranteed things like trial by jury and that all laws be enacted only with the consent of the freemen of the colony. More here.

Who knows who is going to be our next prez. Maybe it could be her. Certainly looks gun friendly and fairly presidential too. If she had half a brain I might even vote for her. She'd almost assuredly have to be better than what we have now and if not at least she would be easier on the eyes. 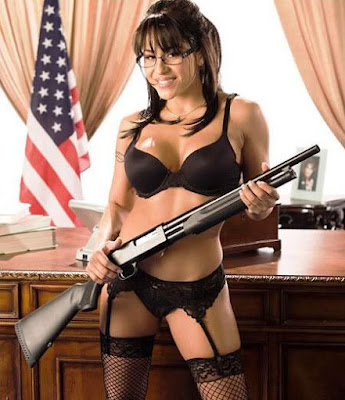 The Importance of Firearms Training 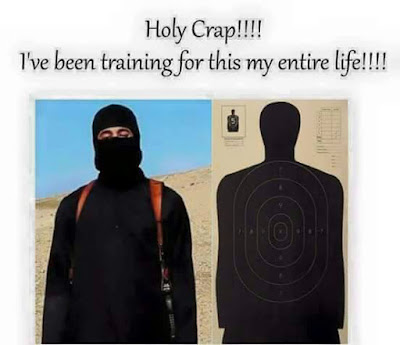 I just never realized, until now, how darned realistic were those silhouette targets.

A hat tip to Ed S for posting that on his FB page from whence I lifted it.