Brendan popped the first 6 caps through the Ruger Redhawk. He shot like shit and he seemed pretty surprised as he told me it hurt like hell in the web of his hand between the thumb and forefinger. He added that it had one hell of a kick. I took the next half dozen shots and can confirm exactly what he said; although, I shot better than him. He got better as we went along with a little tweaking from me. He did okay with the Remington R1, in 45 ACP, that we had along - it was just that kicking mule 44 Mag that gave him trouble.

As for the pain in the hand from the recoil, for the life of me, I cannot understand why the area between the top-strap and back-strap is so thin in that large a caliber revolver and why Ruger insists on those fancy looking rosewood grips instead of something like the Hogue Monogrip that they use on the 4" barreled Redhawks. Yes, the rosewood grips sure look nice but they don't give enough to hold onto with the gun kicking and bucking wildly each time you fire it. I have absolutely no doubt, I will be getting a set of rubber grips like the Hogue Monogrip or the Pachmayr Finger Groove Decelerator Grip and will be getting them soon. They should prove to the cure for this beast's biting recoil and make it all that more controllable. And yes, it did bite, heck it took some flesh off of me. 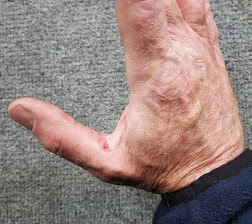 In fact, right after we were done shooting, I looked in the gun shop at the range but they did not have the right size Hogue Monogrip and had none by Pachmayr either. We also stopped at SARCO, right next to the range, and looked there but they had mostly surplus stuff and not the grips I wanted. Anyway, as I said, I will definitely get a good set of Hogue or maybe Pachmayr grips for the Redhawk really soon - I sure don't need to bleed because the darned Redhawk sinks its talons into me a second time. Brendan fared better than me in that department. He had no tearing of the skin. Yet, even though he has much stronger hands than me because he works doing deliveries for a lumber yard, he still got bruised in that same area and had had enough of shooting the Ruger after about 30 to 36 shots.  As for my hand, that happened on the 30th round that I fired, the last round I fired with the Ruger today. Call me a wussy if you want, but once I started bleeding that was enough for me. Brendan fired another 6 rounds or so and that was it for him too. I should say that was it for the Redhawk and the 44 Mag ammo because after that we continued to take turns with my Remington R1 1911 which we had already been shooting between volleys with the Redhawk. The 45 ACP ammo was a pleasure to shoot after the 44 Mag, even after the back-strap of the Redhawk chewed up my hand a bit.

The range we visited was The Heritage Guild in Easton, PA. When we arrived we were greeted by a courteous lass behind the counter who gave us two or three pages of forms to fill out, including the range rules, a bio sheet and the waivers that have become necessary because we never followed Shakespeare's advice to first kill all the lawyers. When finished with the paperwork, we watched an 8 minute orientation video. Then back to the counter, where there were only two other folks on the line (another father and son team from the look of them) and next thing we knew we had some targets, were all paid up (thanks to Brendan treating me) and directed into the range. The range had 5 or 6 shooting bays and had another room next to it consisting of a similar set-up. I think there was also another mirror image setting, or at least another range, on the opposite of the building. It, to my surprise, was not busy.
In all, we only shot for an hour, both of us taking turns on a single point but we had loads of fun in that time. After shooting, we looked around the gun store part of The Heritage Guild for ten minutes or so and as I said above, we then headed over to check out SARCO right next door. We probably spent 45 minutes or more in there checking out the guns they had on display. Lots of milsurp stuff firearms, magazines, spare parts and stuff. I commented to Brendan that it was like going to a gun show and he agreed. They had some older 22 rifles I would have considered buying was I not broke after shelling out big bucks for the Redhawk and ammo for it. Did I mention Brendan paid for the range time - good kid and saved me some cash. he also drove his car there and declined the offer I made to pay for a fill up at a gas station.
After SARCO, we headed to Weyerbacher Brewing Company just a few blocks away. Brendan had two small brews (and I do mean small, I think they were 4 ounces each) just for taste. I had a pint of Blasphemy and it was terrible; Brendan took a sip and thought likewise. Before today, I had already had another of their beers, bought it at Costco, called Merry Monks. That one is excellent.
Brendan also liked the two different ones he tried today. I remember the first one was called Blithering Idiot because he said they had named it after me. The other one was Heresy, what he just committed by saying the other one was named for me. I picked up a six pack of the Merry Monks brew and another six pack of something called Insanity to bring home with us. After that, Brendan smoked a stogie out at a picnic table adjacent to the parking lot, then it was off to home. 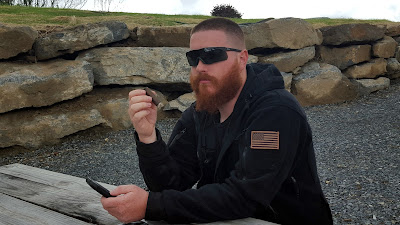 Not a bad time at all and next time we go to The Heritage Guild, we will be sure to reserve one of their rental full auto weapons for some excess shooting goodness. I also will be sure to bring the Redhawk again but with rubber grips on it.
All the best,
Glenn B
Posted by Glenn B at 5/07/2016 11:38:00 PM No comments: 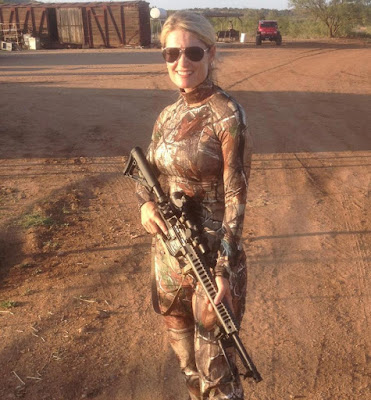 ...about 2 hours later than expected but I guess both me and the lad had a couple too many of them moonshine cherries last night. Oh well, so we will shoot this afternoon.