Not Only Did The Dipshit Say ISIS Was Contained...

...he said it on the same day that we, among other nations, received a warning from Iraq of an imminent set of attacks on coalition countries by ISIS, including France. See this.

Imagine shooting that thing and leaving your eye protection up atop your head, not to mention your ears! 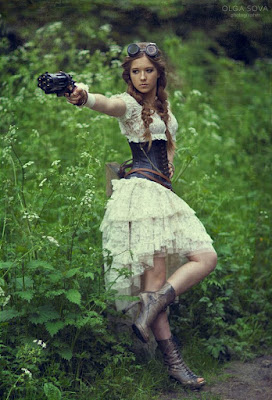 I Would Not Vote For Jeb Bush...

...if he were the last candidate on earth that was not a democrat. In fact, if he was, I might actually consider voting for the likes of Clinton or Sanders to assure he did not get in to the White House.

I Had The Displeasure Of Eating A Pepperoni Pizza...

...that I bought at a Walmart this weekend. What can I say, I was really hungry and didn't feel up to looking for a restaurant, so I grabbed what the sign said was a fresh baked pepperoni pizza for only $5. Here is my opinion of that pizza: The crust was the most un-pizza like crust I have ever eaten. I think it was more akin to crumbly almost tasteless soda bread. My guess is that it was flour and water and little else except maybe baking soda or powder. The sauce tasted like something out of a can, and I would guess a very old and dented can of something that may have been stashed away in a fallout shelter back in the early sixties. The pepperoni slices seemed to me more like thinly sliced cardboard, flavored like pepperoni, that actually being pepperoni. The cheese, that may have been the best part if only because it was hard to tell exactly what it tasted like through the sauce and pepperoni and crust.

In my estimation, that pizza was not even fit for the prisoners at Gitmo and I would think they deserve little more than rancid swill. Of course, I am not trying to make up your mind for you in any way, shape or form by telling you all this, I am merely expressing my estimation of what I believe was the most terrible tasting pizza I have ever put through my digestive system. In fact, I think it may have tasted better after passing through me. In the future, I plan to never try one again but you go right ahead and try one for yourself ands ee what you think of it. Who knows - you may think it the most tasty pizza ever!

What I Find In The Woods

I was waling through woods of varied hardwoods, with a pine here and there, scouting for deer sign. It was a chilly November morning with a very light drizzle, really more a bit of a faint barely detectable haze leftover from the rains. As I walked along, I detected some scant deer sign here and there and could see I was coming up on what once surely must have been a  clearing.


I figured if there was going to be deer sign nearby, it would be there. It soon became obvious a deer trail or two led into that area. The spot was about 40 yards in diameter. As I continued on and scanned more slowly this time, I realized that a large object on the far side of the opening, that at first glance I dismissed as a stone, was something altogether different than what I had seen on first glance. I suppose that its thick blanket of vibrant green moss had me fooled for a second but then I focused on it and realized it was this: 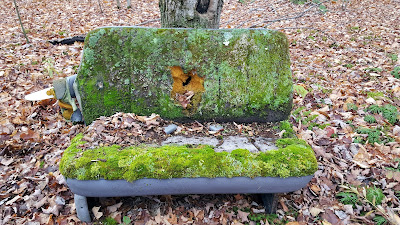 Heaven help me when it comes to figuring out the motives of others for the tasks they undertake; sometimes you can never figure the why or how of them. This time though, I would hesitate a guess or two. Maybesomeone dragged or drove this car seat (or van seat) the half mile, at least, that it took them to get it there to use as a deer stand. Then again, judging by the errant beer cans I found here and there, maybe it was just used as a seat to sit and watch and listen to the woods while tossing back a few. Either way, that seat has been there for a few years based on the looks of it. It also looks as if someone may have taken the liberty to use it as a shotgun target, maybe shooting it from the backside. Of course, that hole in the center could have been due to rot, although it looks to clean to be rot and not one other part of it is rotted like that, or possibly due to a small creature pecking away at it for nesting material. My guess though is shotgun target or tiny critter. Whichever, it is fairly new damage judging by the lack of moss in the hole.

Surprisingly, there was not much deer sign in the area. I thought there would have been more but only some scant droppings here and there. No rubs, no scrapes, but yet a nice seat to use as a deer stand. Well, maybe there was more deer sign and it was a nice deer stand once upon a time. Now, it is more likely home to whatever small woodland creatures make it such.

The things I sometimes find in the woods amaze me.