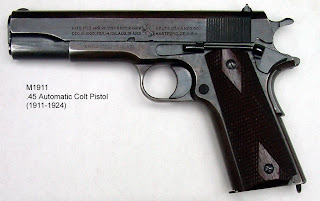 For the most part, I am neither a fan nor a detractor of the Colt 1911. I don't own one but I readily admit I would like one.
With that said, allow me to point out it is one fine American Pistol. There was probably no other pistol so well associated with United States military strength as was (and probably as still is) the Colt 1911. Based upon that honor and upon how many of our service members have carried and shot them, I would be remiss as a gun guy, supporter of our military, and somewhat of a history buff if I did not tell you all that:

It held that honor for many years until it was pretty much replaced by the Beretta M9 about 25 or so years ago. The Beretta, though an excellent pistol, shoots the measly 9mm pea-shooter round. The Colt 1911 shoots the venerable .45ACP, and you can bet it packs a wallop. I am pretty sure many of our wartime enemies could attest to that. It was and remains a great pistol among the great pistols of the world. My hat goes off to John M. Browning for designing it and to Colt for manufacturing it and to the U.S. Army for arming our soldiers with it once upon a time in history.
All the best,
Glenn B
Posted by Glenn B at 3/29/2011 10:50:00 PM No comments:


Ever heard of bump firing. It is a technique whereby you hold a rifle in a certain manner with your finger on the trigger in a certain way and the next thing you know, it is the recoiling motion of the rifle that is in essence firing the rifle. It can make it seem as if you are firing fully automatic. With traditional bump firing, you lose accuracy because it is difficult if not impossible to control the rifle in the proper manner.

Step in Slide Fire Solutions with their SSAR-15 stock. It is an awesome device that replaces the stock on an AR15 and brings bump fire (or should I call it slide fire) to a whole new level. The stock can be used in a locked position whereby it acts like a normal stock and the shooter must pull the trigger with motion of the finger to fire the rifle. If you unlock the stock, the shooter then must place his finger on what is basically a rest that sits just outside the trigger guard area, the rest (or whatever they call it) seems to be attached to the replacement grip that comes with the stock. The finger goes through the trigger guard to have the end of the finger sit on the rest on the other side while the middle of the finger is across the trigger. Then the shooter gives a push/pull to fire the weapon. With what seems, to me, to be a piston like motion, the stock slides back and forth on the buffer tube of the AR. As you push/pull, the gun fires activating the trigger each time it recoils from what I can tell. You must push forward with the non-trigger finger hand and pull back with the trigger finger hand to fire. You can fire single shots, two very rapid shots, three very rapid shots (appearing like auto bursts but not actually auto fire), or you can just keep firing making it appear that the weapon is full auto. The trigger is, it seems, activated separately for each shot, it is just done so at an incredibly fast rate. It sure appears as if you are firing fully automatic and the firing rate is probably as high as found in many full auto weapons but it is being fired semi-automatic. While you can achieve this while bump firing the traditional way, the big plus with the SSAR-15 is that you can still control and aim the guns while shooting that fast.

Now, I am none too sure I explained that exactly right but think if not 100% correct I got it pretty darned right. Take a look at the company web-site to learn more:

This is not an inexpensive device. The price on the manufacturer's site is about $370. I have seen it elsewhere on the web for about $350. It is supposedly legal, at least on a federal level and it comes with a copy from the BATFE supposedly saying it is legal federally. The letter can be seen in a slide show at the above link to the page showing the stock. I note, the letter calls the stock a firearms part and says it is therefore not regulated under the Gun Control Act or the National Firearms Act. I think I should point out, it did not say that when attached to a rifle, it does not turn the rifle into one that is fully automatic or that the rifle would then still be legal. Read into it what you will. The manufacturer and at least one retailer claim it is legal. On the state level, that may be another issue. It may or may not be legal in your state. I cannot see why it would be illegal here in NY but I am no lawyer. I also am sure that once the antigunners find out about it they will strive to ban it.

If I could find the change, I probably would have to go for it but that would be tough right now. Just watch the video again and listen to the laugh of that cute grandma-like lady shooter; her laugh says it all - I want one and I don't even own an AR (although my son does)!

I spent virtually all of the day, on Sunday from 0730 to 1500, at a reptile show. I was manning a table for the Long Island Herpetological Society. Luckily, for me, I was there with another member, harry F., who was willing to let me sneak away for about an hour or so to make a quick run over to the nearby Costco. I needed to pick up some things for the house. Since I was manning the table at the show, I had pretty much decided, ahead of time, to just look for the items on the list given to me by my wife. I figured I would be in and out within an hour.

I was pretty much right on the money for the time I would be in there but I wound up straying a bit from the list at hand. When I saw this huge container of Coconut Macaroons I would have needed ropes and a mast both twice as thick as those that bound Odysseus as he sailed past the allure of the Sirens. They were calling me and I succumbed.

They were a big hit once i got them home. My wife apparently loves them. I imagine the kids have gone for some too although Brendan is not much the sweets eater. I have eaten more than my share but must say am happy for the help I have been receiving, probably from Linda & Celina, in making them disappear. I'd hate to see how many pounds I would have gained had I alone liked them. There are still some left but my guess is only about 1/3 their number remains. Mmmmmm-mmmmmm good!

Next time I shop there though, I may grab the Hostess Twinkies - they had huge boxes of them. They were my all time favorite packaged pastry/cake treat when I was a kid. Haven't had them in years but will have to give them a try again soon.

When trying to post lately, while in the compose mode, anything that is written up winds up in one big block of text without line or paragraph breaks. This can be fixed, with a lot of effort on each individual post, in HTML mode. Blogger's solution - get another web browser other than IE. Hopefully they will fix it soon.

Now yet another problem has arisen, the publish icon does not function when clicked on with the mouse button. Instead I have to run the mouse cursor over the icon, then hit enter to publish.

I may have to search for a new place to blog if this type of stuff keeps up. It is getting annoying, one little problem after another. yes there have been other issues recently. Very annoying.

Anyone know of another free blog site?