I upgraded from Windows 7 Ultimate to Windows 10 this afternoon. After having done so, my advice to anyone out there is:

As far as I am concerned, Windows 10 is little more than a piece of shit very fault prone operating system that may well screw up the workings of your PC - it sure did to mine. I waited weeks to receive notice from Microsoft saying the upgrade was ready for my laptop. Then, after installing it, several of my programs/applications no longer ran or did not run properly. I tried to assure that all my drivers were up to date to see if that would help but Windows 10 apparently would not allow me to do so and whenever I tried to do anything like that, I kept getting a message saying I had to contact the administrator because the application or program had been marked as unsafe. I also found that booting and shutting down the computer were both much slower under Windows 10. In addition programs, that did run, ran slower. None of that had not happened under Windows 7. After several hours of trying to get things to work as they should, I gave up. That was right after I found out I had the option to remove Windows 10 and reinstall Windows 7. I did that but that was not a cure all. I am still having problems with some programs like HP SimplePass, my fingerprint reader and with downloading driver upgrades for things like my graphics card.

I have two words and a number for Microsoft: Fuck Windows 10.

Well, there I was working all week and taking care of the house with the wife away for ten days; so, I did not get in much kilt wearing this past week. Thus the absence of photos and blegging reports all week long. Anyway, that changed yesterday, at least for the weekend since I'll be working all this week too but I do have some pics from yesterday. The first is of me  in the local Costco parking lot just after I got to my car to load the groceries into my car's trunk. 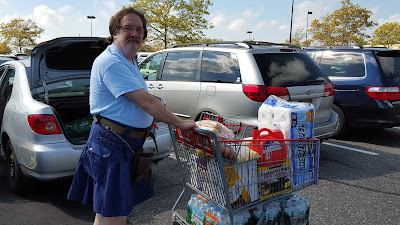 The next is of me at JFK Airport while waiting there to pick up the two Long Island princesses after their return from their Mediterranean cruise. You should have seen the look on the guy's face when I asked a stranger in the crowd to please take a photo of me with my phone camera. A little explanation was all that was needed though and he helped me out. 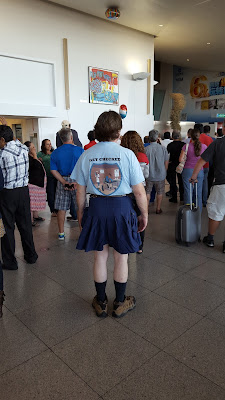 The next is of my wife and daughter. I tried to get a really quick surprise pic and thus it came out a tiny bit blurry as I was still swinging the camera up when I snapped this one. I had wanted to get the looks on their faces when they saw me kilted at the airport but they quickly changed from looks of sheer disgust to smiles when they realized I was taking their photo and my daughter told my wife to smile. 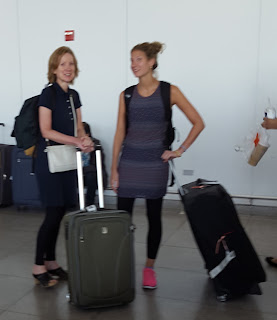 Right after I dropped the women off at home, I hopped in my car and headed to the NYCB Theater at Westbury to see the Marshall Tucker Band and the Charlie Daniels Band. Brendan and his friend Pat already preceded me there because there was a chance I would run late with picking up the girls at the airport Somehow, the got through Customs & Border protection inspections within 45-50 minutes of landing. They had just announced a minimum 2 hour wait to cleat CBP so that was a good surprise because I got to the concert early. 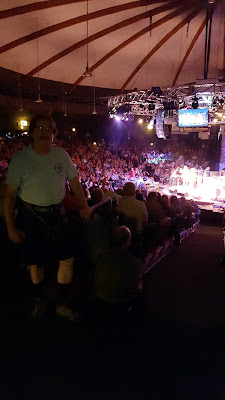 It was a great concert. I had fun being there with Brendan and his pal Pat who both seemed to be totally enjoying it. Charlie Daniels was great as was the Marshall Tucker Band; they sure brought back memories of the mid to late seventies for me.
As for the rest of this past week since the 19th, I have been working each day and obviously not wearing my kilt then since I need to wear a uniform. The rest of my time has been spent at home taking it easy since I have had a couple bouts of gout this week and am still feeling pretty crappy since I have not yet gotten my stronger strength prescription for my thyroid meds. In other words, no kilted adventures all week long. I will be kilted this weekend if feeling up to getting out and about and should post some pics by Monday, maybe even tomorrow.
By the way, me not being kilted does not mean that I have dropped out of the prostate cancer awareness campaign and Kilted to Kick Cancer fundraiser. I am hopeful you will find it worthwhile to make at least a small donation toward the fight against prostate cancer through the following link:
http://www.kiltedtokickcancer.org/product/ktkc-donation-2015/
Team Glenn B has fallen to 7th place and sure could use a boost as could the overall amount of donations. To date, as this post is being written, $12,774.00 of the hoped for $50,000 has been raised; Team Glenn B has raised $445 of that. Remember that: "Kilted to Kick Cancer is an IRS 501(c)3 Non Profit and your donations are tax deductible. 100% of donations goes directly to cancer research, prevention and fund raising efforts.  No one at KTKC draws a salary.".
All the best,
Glenn B
﻿