A Commonality: American Beer - German Bier - Sex in A Canoe 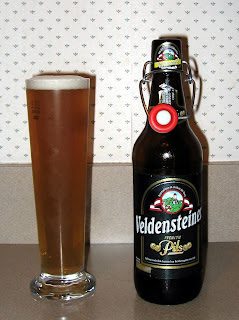 I once heard a Lufthansa pilot telling a joke to a couple of Lufthansa stewardesses (that would be flight attendants for you politically correct dimwits who want to put a more modern slant on it). I am pretty sure he only told it to them as loud as he did to make sure he had gotten my attention since he knew I worked for the Customs Service at the time and he wanted to give a little jab to an American. The joke went like this:

Pilot: Do you know what is the same mitt American Biers and sex in a canoe.
Stewardess (after glancing over at me): Vhy No Herr Capitan.
Pilot: They are both f''ing close to water.
Stewardesses: Giggles.
Well, I have had a lot of American beers in my days since then from micro breweries. American beers have improved and while that joke may still apply to beers like Budwiper and Spoors, it most certainly does not apply to great brews like Ommegang.
I have also had a lot of German Biers since I heard that joke, I have almost always loved German Biers; and I must admit that until tonight I have never had one that had anything at all in common with sex in a canoe. Yes, that was until tonight when I had a bottle of Valdensteiner Premium Pils and suddenly I imagined myself in the movie Deliverance. (If you have never seen it, rent a copy. My son watched it last week for the first time and liked it. Although he did say there were too many canoeing scenes, he liked it overall and thought the plot was a good one. I am happy I did not have him watch it before our recent road trip to the Shenandoah Valley for some canoeing.) Back to the Valdensteiner - Had I paid for this stuff, I suppose I could have said I had been f'd by or in something close to water because to me it had that watery taste similar to some American beers.
As it was though, my brother-in-law Hans sent three biers to me on Sunday. He sent them with some darned fine tasting pork ribs, the best ribs I have eaten in years. I had one of the biers with them and that bier was yummy too, or actually I should say it was an ale and it was scrumptious. That was a bottle of Sticke Uerige Alt (Uerige being the name of the company I think). Sorry no pic of the bottle, sort of had the shape of a German WWII grenade, and the bang to go with the looks. Aah here it is here on the Uerige website. It was a Belgian Abby type brew, or so it tasted, darned fine stuff. Very strong and excellent taste indeed. Now I have one bottle left over, it too is a bottle of something by Valdensteiner. My guess is that they cannot possibly make two types of canoeing bier, so I am hopeful that one will be much better. As it turns out, that first Valdensteiner is still passing my lips in sips, and it is starting to taste a bit better, but still kind of close to water for a German brew.
All the best,
Glenn B
Posted by Glenn B at 7/01/2008 10:21:00 PM No comments: Links to this post

Buy Your Watermelons For The Weekend Today...

...because the price is almost sure to rise by tomorrow. The price of gasoline and diesel have little to do with this anticipated price increase, yet the price increase could be a steep one indeed. I base it all on supply and demand, and I expect the demand to rise sharply. Once the watermelon is all bought up, I also expect people not to just eat the fruity red part, but also to start eating the rind, or at least part of it. Why? Well you see, there is this article at FoxNews.com. If reading that is not enough to get at least 25% of the people in the USA hopeful that they can have a much more fun weekend if they eat watermelon (including the rind), and maybe another 15% convinced they will be healthier if they eat it, and therefore cause a price increase, then I don't know a thing about the human condition. There is sure to be a rise in interest in all things watermelon after this article makes the rounds (sorry I just could not resist).

This Should be The Law Of The Land...

Read about the Texas homeowner who shot some suspected burglars, how he was then charged, and then how he was vindicated of any wrong doing - see Texas man cleared of shooting suspected burglars. Do I need say anything more than the law in Texas is a good one, and that it should be this way in all of America. Please note the part about the two dead suspected burglars being illegal aliens, one with a prior cocaine conviction. Good riddance, and good for Mr. Horn!