While still in minneapolis, itwas not so much to hear the announcement that our crew had been notified by the previous crew of our plane that the plane's weather radar had been repaired after failing during the previous flight. Rather (as we taxied toward the rain soaked runway) hearing that it just failed (again) built my confidence. If you are wondering "is he being facetious"- no I am not. I am quite comforted by the timing of the discovery - better realized while on the ground instead of in the air and in a storm. What's a delay of 45 minutes or so compared to finding out too late. We were on our way again soon enough, right after they fixed it again.

Right now we are in Anchorage, on a line, waiting game to get a pick-up truck. All has gone well here at the airport especially but we were a bit concerned when all the luggage was on the carousel except for my gun case. I checked around and found an airline rep waiting for me with it on a trolley. Special delivery I guess but I wish they would have told me, ahead of time, that was going to be the case.

Change of Planes In Minneapolis

A change of beverages too 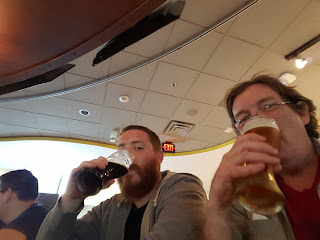 ...to start our trip right. We sat down at a bar in Terminal 4 at JFK Airport for breakfast and that hit me up for $65.00 including the tip. I think that was crazy but as my son said we are on vacation so let's act like it. Of course the $18.00 Bloody Mary he got was a large chunk of that but he said it was strong and excellent. At least we won't be tempted to eat airline food on the flight. 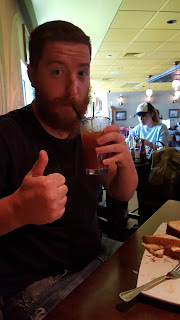 We should be boarding soon a d on our way.