You Tell Me - Do You Agree That There Is Something Very Wrong With This Video?

I am a member of the North American Hunting Club, mostly to get their magazine. They send a lot emails to me some with hunting hints or tips and others just outright annoying - mostly the latter with advertisements. Tonight I received an email from them with the subject line: "Video: Woman In Woods Fends Off Attacker". So I take a look by clicking on the video screen in the email. That takes me to another website with the video.

The video is obviously not a news or documentary type I thought it might have been before going to it. It is instead, a pretty cheesy advertisement for a Green Laser Sight. In it the woman is walking through the woods, a bad guy is hiding in the woods near the trail, he gets the jump on her and is holding a knife and is only about 10-15 feet from her max, she drops the binoculars she had been peeping through, goes to her purse, opens it, pulls out a pistol with the green laser sight and points it at the guy with the knife, who as I said is probably not more than 10-15 feet from her if that far away. Then it turns into a commercial that is, in my opinion, one much akin to those alarm company commercials on television where the alarm going off startles the bad so so much he just about pees then flees and the alarm saves the day. Watch it, you will see what I mean.

Then answer me this: Am I right when I think - There Is Something Very Wrong With This Video, As In The Message It Is Sending?

I just may have to unsubscribe for the NAHC emails after this one!

...oh no it's not. Actually it is sleeting (yes that is actually a verb). I just went to the window to check after hearing the rain pelt the windows rather more loudly than usual and with a pinging noise at that. It is only November and the rain is coming down as ice. It promises to be a wet, cold, bone chilling sort of a day.

Today In History - Bourbon Is Born...

...or so goes the story - sort of! In November 1789, Elijah Craig, a baptist minister residing in Kentucky, opened a distillery. (Gotta love a preacher opening a distillery, my kind of religion!) His distillery produced an elixir known as Bourbon which was whiskey distilled from corn. According to some, he was the first to distill whiskey from corn thus being the creator of Bourbon on November 8th 1789; however, according to others, local farmers in the area had been distilling whiskey from corn for at least a few years before Craig did it. Regardless, he was credited with the creation (not the original creation but a rather divine one at that). He has also been credited, or at least his distillery has been credited, with being the first to use charred oak barrels to age whiskey thus adding a taste to spirits that may have indeed been Heaven sent. 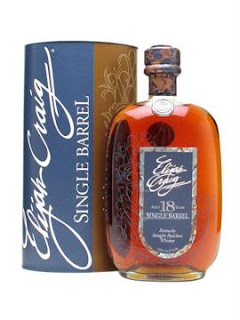 Today, he may best be remembered because of Elijah Craig 12 and 18 year old Bourbon which is produced by the aptly named Heaven Hill Distillers. I used to drink bourbon but not for awhile now. Still though, at around only $45 per bottle for an 18 year old bottle of whiskey, I may have to try it. If you go out to buy it, shop around first, some places ask over $75 a bottle!