Biden The Finger Pointing Puppet Needs To Be Ousted...

...by whatever legal means will accomplish removing him as president. 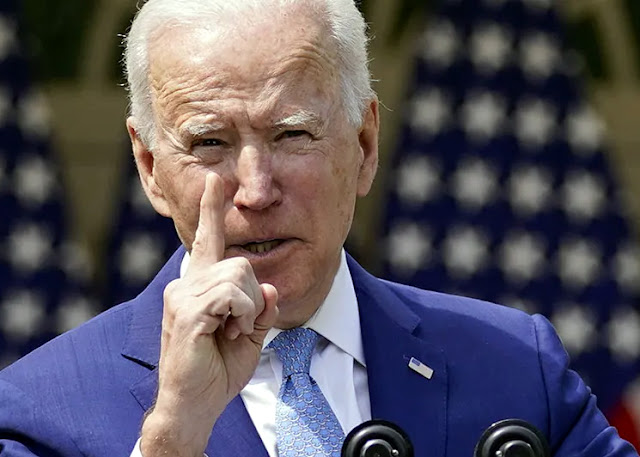 I, as do many Americans, find it unbelievable that our nation has arrived at what may be its lowest point in history when it comes to: the repeated lies from the oval office (such as what Biden called a successful military drone strike that he said took out terrorists in Afghanistan but was actually a major failure resulting in the killing of a non-combatant man and most of his children); his abject failure to pull our citizens, troops and allies out of Afghanistan safely; leaving behind millions, if not `billions, of dollars worth of military equipment in Afghanistan; allowing the Red Chinese to spread their influence in Afghanistan; the sovereignty or lack thereof of our borders as witnessed by his utter failure to control our borders and now Biden's ridiculous banning the use of horses by the Border Patrol and what amounts to his conviction of Border Patrol Agents, in sum & substance, before getting any of the facts right;  the government's disregard for the rights & liberties of our citizens; the disregard for law and law enforcement; the call for the abolishing of law enforcement as we know it by way of defunding of the police; the tolerance & even acceptance of brutal crimes committed by what amount to terrorist groups (in my opinion such as BLM & ANTIFA), why has Biden not attempted to stop these groups; the apparent disregard for the murder rate which has sky rocketed in leftist run cities & states; the incessant flip flopping on mask mandates and vaccine booster shots as related to COVID-19; the fact that the federal government has taken it upon itself to act as if Joe Biden is lord & master of all he surveys while there is evidence of the apparent fact that the president of the United States of America is suffering from some sort of mental illness as evidenced by his off track remarks, his repeated forgetfulness, his inability to give answers to questions put to him and his all too often his angry outbursts; the presidency controlled by unknown secret handlers as evidenced by Biden repeatedly saying in essence that if he answers a question it will get him in trouble because 'they' told him not to answer questions; the current inflation rate and that expected yet to come; the cost of a gallon of gasoline which went up long before the current inflation; he has even isolated one of his main allies - the media - by being outright silent and turning his back on them when they ask questions; and the list goes on.
The man is a menace to the United States of America and now we learn he may owe $500,000.00 in taxes to the IRS. Lest we forget there were the scandals involving his son that also involved Joe Biden relative to money he allegedly received by way of his sons enterprises in Russia & China (RED China). Just today, it was reported but somehow all the articles about it have disappeared, that Huawei Technologies Chief Financial Officer Meng Wanzhou will be sent back to China from Canada and miraculously two Canadians will be released by China and returned to Canada after intervention by - wait for it - President Joe Cozy With The Red Chinese Biden! I read a detailed article on Fox News online about that last night or very early this morning but cannot find even a scrap about it on the Fox site now.
There is this piece on CNBC but it seems to leave out (unless I missed it) any mention of the Biden administration orchestrating the release of the detained Canadians in exchange for Meng as the Fox article reported the deal. If theren was no intervention by our government, for the release of the Canadians in exchange for Meng, the timing must simply be miraculous because she made her deal to be allowed to return to China under the terms of a deferred prosecution in the USA. She was being detained in Canada for extradition to the US but the deferral was carried out the Eastern District of NY in Brooklyn, NY on Friday last - on the same day the Canadians were released by China.
We need a truly competent president in charge, one who loves America and our Constitution and not this bumbling puppet - one who realizes he is the servant of the American people. The only way that will be accomplished legally & without bloodshed will be in November 2022 by way of voting for just about anyone, except democrats/liberals, into Congress. Then Congress can oust him. Hopefully it will not come to a violent insurrection before then but the way it is going - who knows.
All the best,
Glenn B
Posted by Glenn B at 9/25/2021 01:31:00 PM 3 comments: