If you need to store stuff, from food to toiletries to boxes of family memorabilia to auto cleaning supplies to gun parts or ammo to whatever, a space saving way to cache it away is to store it on shelving. I have a set of shelves in the back of my basement made out of 2x4s, plywood, nails and with some peg board thrown on at one end; the wood is coated with spar varnish. Like the workbench I also made, the shelving unit is sturdy, solid, strong as all heck because I made it that way. I recently had the need for another set of shelves but decided against building another one like that. The thing is, while I would not mind building another, the unit is not at all portable. It is going to stay where it is until someone rips it apart to move it in pieces. For all the time, effort and money I put into it, there are satisfactory alternatives out there that would do job I need done and that are portable and easy to both put together and to take apart if not as quite as strong and durable as the one I built.

One of those shelving units can be found at Home Depot. It's the HDX Heavy Duty Storage Unit with 5 Shelves. The set I got is 36" wide x 18"deep x 72" high (that high if you put it together with all five shelves but you don't have to use all five). I needed a shelving unit to help unclutter my basement so I stopped by Homer's the other day and picked up one of these. 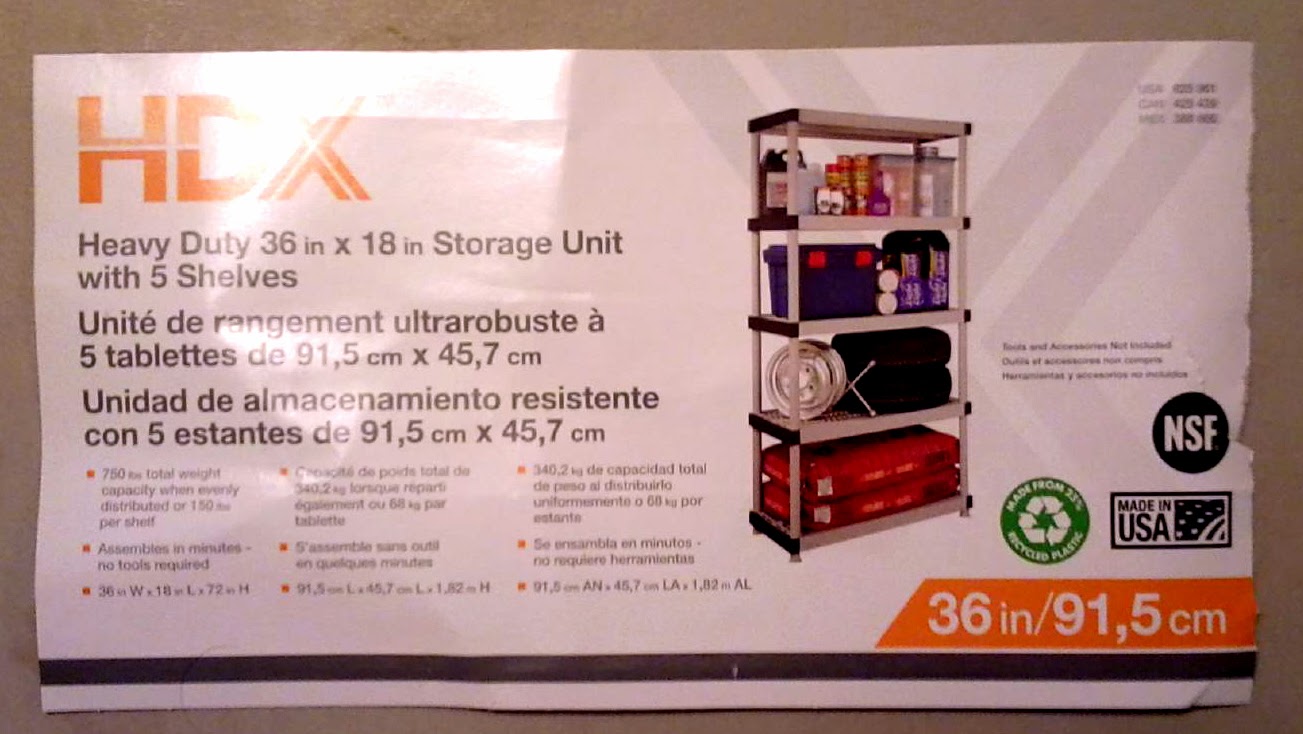 I didn't do it in the blind either. We have at least six others of this same unit in our home today. Three of them are out in the shed, one in the garage and another two in our basement pantry. We have had them for at least five years now, probably a lot longer than that. That I just bought another one attests to the fact that I am satisfied with them for my purposes.

I use them to store whatever we store in the shed and garage that fits on the shelves and to store household junk and food in the pantry. They have stood up to having things thrown on them, fall on them, bang into them (as in bump not shoot) without incident for the most part (two cracked but were still useable). They are plastic though and these shelves are much more susceptible to being broken than something like a metal or wood set of shelves so you have to be somewhat careful with them. They do hold a lot though. According to the packaging, one unit can hold up to 750 pounds at 150 pounds distributed evenly on each of its five shelves. I don't know if any of mine have ever held that much weight, and I surely would not put 150 on either of the top two shelves, but I can say that I have had items weighing at least 75 pounds on some of the shelves and they have withstood that weight without noticeably warping, bending, cracking, breaking or collapsing for years now.

The unit comes wrapped in plastic, all the shelves bunched together with the legs, feet and end caps in the bottom recess between two of the shelves. The instructions to put it together are on the back of the packaging. It is pretty much a snap, everything just fits in place and you should be able to get a set together in a few minutes or so. They do not come with any adjustable means to level them so you may need to put something under at least some of the feet of the unit if you need it leveled. I used two Schaeffer beer coasters under both of the front feet of mine to level it front to back. I did not bother leveling it side to side. Then I loaded it down with  junk our belongings that had been cluttering up the basement. Well, I should say with some of our stuff that been laying here and there in the basement because it sure did not fit all of it. I could have gone for the larger unit which has mostly the same dimensions but has a depth of 24" instead of 18 and it would have held a bit more. I figured though that I don't need a unit sticking that far out from the wall if only because I don't need to increase the odds that I may bang into it.

I'll probably be going out to get another one today, or maybe right after payday. I figure I will use the additional one as a stand for some of my critter tanks. By my estimation one shelf should fit three 10 gallon tanks across its width if the small end of the tank is facing out or one 20 gallon tank across it with the wide side facing out. I can use the bottom shelf for storing accessories, the next three shelves for tanks and the top shelf for other accessories. Note, I am talking about dry, all glass, reptile tanks and not aquariums. The weight of glass tanks holding water would most definitely collapse this shelving unit and it would pose a dangerous situation - do not use these units as aquarium stands. I am going to set that unit up in the finished part of my basement. Doing that will clear up a lot of space on the wood shelves in the back of my basement where I can store the rest of the clutter that remains and still have room left over for some other things.

In all the years I have used mine, I think only two shelves have ever broken and that was from banging something heavy and unforgiving into both of them pretty hard. As I said, these are plastic and plastic is on the fragile side. Still, I highly recommend them for similar purposes as those for which I have been using them. If you are in the market for fairly strong, fairly sturdy and fairly durable set of shelves at a reasonable price (I think the set was $39.99) and do not require the added strength of wood or steel shelving then consider these. Mine have served me well for years.

Oh, one other thing, they are made in the USA.

Note: As usual, I was not solicited to give this review and was not compensated in any way by the manufacturer, retailer or anyone else for doing so.
Posted by Glenn B at 10/29/2014 11:36:00 AM No comments:

I Wonder If She Hunted Down & Shot The Beasts...

...skinned em, tanned the pelts, and sewed them together to make the coat. If so, we need more folks like her in America because... 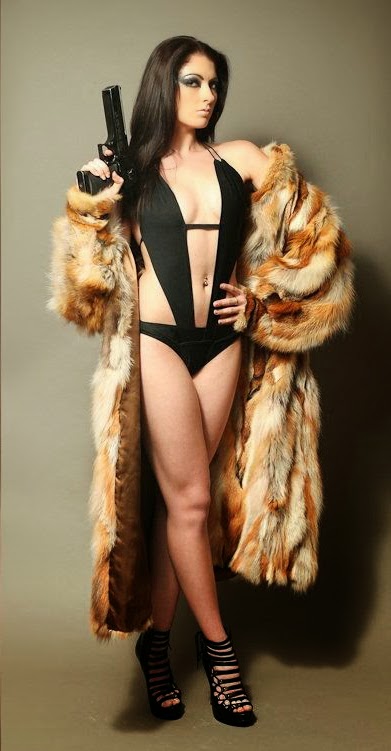 ...that coat must be very warm, just look at what she is wearing under it. Thus it must be one excellently made coat and we could certainly use some quality manufacturing marked 'Made In The USA' to help boost our economy.