I'd Bet She's The Best Sales Clerk In The Gun Shop 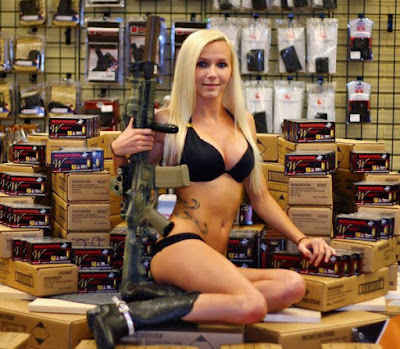 The Oprah Winfrey Show Disgusted Me - But This I Had To Watch...

...and I recommend you watch it too.

Before you watch it though, allow me to tell you what I think of Oprah and her show. Fuck Oprah ten times really hard, in her ass, with a donkey dick fired up with a ton of Viagra, Ben Gay and crystal meth. Yes, I despise her and her kind of so called entertainers. (No I do not mean that in any racial sort of connotation, it is just that I despise what I consider to be ultra leftists like her regardless of their race, ethnicity, religion or whatever.) Now take a gander at this video from the Oprah show, knowing how I feel about her and still with me insisting it is worth your while (and please note, this video was made a long time ago):

As for Trump, I would rather vote for him than (and these are my opinions of some other candidates):

Bush, (really sad case of a guy trying to convince us he is a conservative yet is little more, if anything, than a snivelling RINO)

Kucinich (maybe another RINO and maybe not but just does not have a snowballs chance in the middle of a nuclear war of lasting through the primaries),

Carson (while he thinks right, he is just too much of a whoosh)

Sanders (avowed socialist or in other words I think a commie)

Normally, I probably would vote for Cruz before Trump since Trump has been way too far on the left, regarding many issues, over the years, for me. So, I think I would lean toward Cruz. Then again, that is only if the courts proved satisfactorily that he is what is meant by a natural born citizen. Since he is a dual US and Canadian citizen, born in Canada, I doubt they can do so. I say that because at the time the Constitution was written there was no such thing as a dual citizen as far as I am aware.

Better yet, I would vote for Rand Paul before them all but he will never win the primary as far as I can envision. What a pity because I think he has the right stuff for all Americans and I do mean for Americans and not for wetbacks or terrorists as leans Obama (in my estimation).

So, I am guessing it's going to be Donald Trump who will get my vote. Hopefully he has changed his principles on some things as he indicates in his speeches. While the leopard cannot change its spots, a man can definitely change his convictions, look to George W. Bush being a pussy and having done so by giving the bailouts and look to Ronald Reagan who was an avowed liberal but became the best president in my lifetime after he came over to the right.

My thanks and a hat tip to Steve Del C. for the video.

We Used To Have A Dachshund...

...now that I have seen this one, I want another one.