Today, the Pope blessed thousands of Harley Davidson motorcycles and their riders. It may seem amazing to some but the biker culture of HD swarmed the Vatican for the event which also was a celebration of Harley Davidson's 110th year.
Most amazingly of all though was the fact that the event seems to have somehow, maybe by way of Divine Intervention (after all we are talking about the seat of Catholicism and the end all be all of Motorcycles that are probably even ridden in Heaven), lent itself to the resurrection of Eric Von Zipper (Actor: Harvey Lembeck). You, if you are around my age, may remember him as the evil but inept and somehow lovable leader of the motorcycle gang - the Rat Pack in several of the 1960's Beach Party films starring Annette Funicello and Frankie Avalon. Those films were: Beach Party, Bikini Beach, Pajama Party, Beach Blanket Bingo, How to Stuff a Wild Bikini, The Ghost in the Invisible Bikini. I think, but am not sure that he may have also had a part in the movie Ski Party where the beach goers have a change of venue to the ski slopes.

With him riding through the crowd, I can almost imagine he was also there, right next to the Pope, giving the Pope the his take on whether or not to bless a biker and his ride by saying: "Him, I like", or "Him, I do not like". 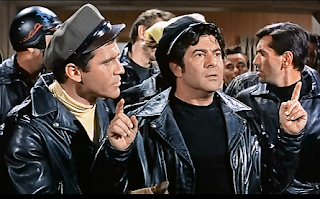 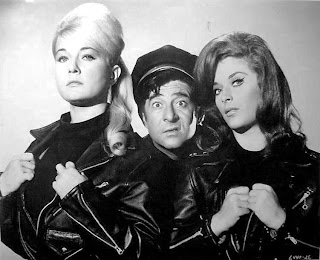 The resemblance of the guy wearing the American flag helmet and Von Zipper, at least as I see it, is absolutely uncanny if it is not actually him reincarnate. Not only is there the resemblance of facial features and seemingly of height and build but you will note that just as was the preference of  Von Zipper, the guy in the current photo also is in the company of a babe who is taller than is he and who is a looker. Sometimes you just have to wonder if there truly are heaven sent angels flying or at least riding close to the ground. In this case, I would like to believe it. Von Zipper - I am my ideal but you are my idol.

Here is hoping that your Fathers' Day is full of happiness with a lot of love from those who are the reason you are called father.

I imagine that the idea of coating ammo with some form of pork product(s) has been sizzling in some folks' minds for quite awhile now. For all we know, some kooks gun owners may have been swathing their ammo with the finger licking goodness of bacon grease in the hopes of using it as an anti-jihadist tincture. I would have bet that an intense search of the web would have turned up one or two of them but I am not betting anymore.

You see, someone actually has gone out and created a commercially available brand of ammunition in which the bullets have been coated with pig. The company: Jihawg Ammo tags it as: "The only ammunition in the world that provides a peaceful and natural deterrent to radical Islam. PEACE THROUGH PORK".

Jihawg Ammo says they say that they coat their bullets with a ballistic paint containing pork thus making them haraam (forbidden or unclean) for radical Islamists and thus if you hear the radical Islamist cry of Allahu Akbar they say: "It's Time to Put Some Ham in MoHAMed". They are touting it as a defensive and deterrent type of ammunition to be used to assure that jihadists will not attain the promised 76 virgins for acts of terror in the name of Allah. Somehow, I sort of, kind of, get the notion that this ammo will not be the end all be all to stop Islamic Jihadists from committing acts of terror but, if he was still alive, General Black Jack Pershing may have disagreed with me. Hey - you never know and at least any of them shot with it would not make it to their version of heaven.

I like the idea but would I buy it? Hell no - probably not, well - not more than a box or three as a novelty anyway;) As far as I am concerned it costs way too much per box to buy it regularly especially in light of the fact that it is all (at this moment) reloads. While I would not hesitate for a moment to put pork coated bullets through my guns, I do not shoot remanufactured ammo and I sure won't pay premium prices for it no matter how novel the product but then again many of you do shoot it and this may be just the stuff for you. While I may buy a box for the novelty factor I have to consider that I just bought 250 rounds of .45 ACP (.45 Auto), 185 grain, JHP, newly manufactured by a major ammunition company for only $23.27 per box of 50 rounds, I think I will save my money for more of the less expensive ammo and for bacon.

Getting back to Jihawg Ammo, their products and pricing can be found at this link:  http://jihawg.com/ammunition. Note if you cannot get through, keep trying. Seems their site is pretty busy today, maybe last minute shoppers for Fathers' Day gifts or just shooters or collectors wanting to get some before it all sells out. Being it is so difficult to get through right now, I'll quote a few of their prices here for informational purposes:

Even if the Jihawg Ammo site is down or very slow, you can get a bit more information from an Ammoland piece about them here at this link:

Now, getting back to pork for a moment or three, since it is Fathers' Day and just after 1125 in the morning, I think that in a little while, I will go see if breakfast is ready (that may be a late breakfast to you and most folks and brunch to Yuppies but it's plain old on time breakfast for me). If it is ready, I think I'll continue my ammo inventory, bullet by bullet, as I eat my breakfast of a pound or two of very greasy bacon. I am not worried about getting lead poisoning because of eating bacon while counting the bullets, seems my hands are so coated by bacon grease that nothing can penetrate that film. As for my ammo though, it seems to be mighty slippery right now - at least the rounds I have already counted since I started the inventory. I imagine they will fly right through the bore liked bacon greased lightning when fired; my arteries though, they may be another story, I don't know if any thing is flying through them quite as fast with all that bacon grease buildup.