The Fix - For Uploading Pics To Blogger (at least for now)

If you cannot upload pics to your blog on blogger, you are not alone. When I tried a few times today, the browse option, for selecting files on my laptop, did not show up. If this is happening to you (apparently happening mostly to IE users but also to some FireFox users), switch to HTML when you want to add the photo. There is also an add photo icon there. Click on it, the browse option should show up, select the photo from your PC's files, do what you pretty much normally do and it should then show up as HTML code. When you switch back to the 'compose' mode, the pic should be there and they say you can edit it as usual. I am about to try to post my ugly mug in this post to see if it works. 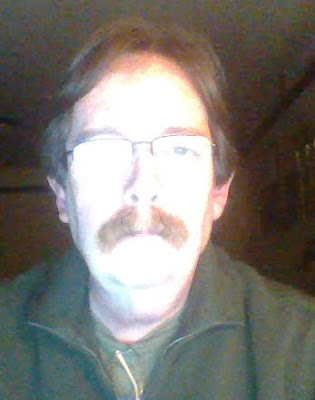 If we can see my pic, then it worked. Ah, yes it worked - sorry for the mug shot.

By the way, I am amazed to have found out the fix so quickly once I looked. It was on the Blogger Buzz forums (or something like that). You can use this link to get there (probably a good link to bookmark):

Then, scroll down to the list in the center of the page, I selected "Something Is Broken" and scrolled through it until I found someone reporting the problem and whose posted question had a few replies.

I have made up my mind not to shop at CheaperThanDirt any longer due to what I think is their abhorent price gouging policy. Tonight, I received an mail from them letting me know they are selling firearms once again. I guess I had forgotten to unsubscribe from their email list but I did it tonight.

To update your subscription preferences or remove from ALL future mailings, click here
Your email address has been removed. You will no longer recieve any messages from Cheaper Than Dirt."
All the best,
GB
Posted by Glenn B at 1/05/2013 10:37:00 PM 1 comment:

That number could have been the number of: the hairs on my head and body, or a count of the scales on all of my tropical fish, or the seconds counted in just over a quarter of a day, or the dollars in my savings account, or the pennies in my penny jar, or my pulse beats in about 4.5 hours, or a count of something else. I am not saying exactly what was counted. Let me just say it again, it was a good number so you can rest assured it was not the number of crab lice in my navel.

What The F--- Is Up With Blogger And Adding Pictures Now?

I have tried to add photos to a blog post and am no longer offered the option of browsing my files to select one to upload. Now, when I try to put in a pic, I am offered specific choices of uploading from my own blog, from Picasa web albums, from my phone, from my webcam or from a URL. What is up with that crap? 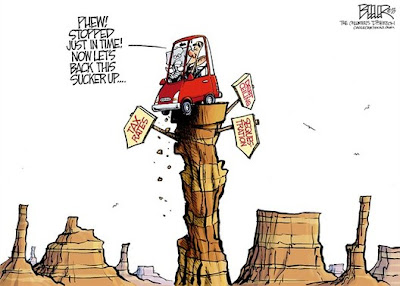 You really do have to hand it to the artist because he hit it on the head as both Demoncrats and Repooblicans are responsible for the fiscal tar pit in which we find ourselves. Thus, I am pretty much convinced that come the next presidential election I will be voting for whomever is the libertarian candidate without even considering my vote going to a Republican even though I have voted Republican since my first vote many years ago. I have come to the point that they have pushed me, and the rest of America, off of the electoral cliff in their absolute disregard for their voting base. When we all hit bottom, if I can still stand - I will stand for a third party.
I have watched my rights and liberties dwindle under the past three administrations as so called Republicans, in Congress, repeatedly have bent over backwards to appease liberal presidents, the likes of Clinton, Bush and Obama, in almost total disregard of our Constitution, of the will of the majority of the people, and of any common sense at all. In Congress, it seems they vote on their self-interests alone. It is not limited to Congress alone. I have seen it on the local level too such as when the Republicans allowed an extremely liberal, Bloomberg, to be their candidate for the mayoral race in NYC. The Republicans have become Democrats and vice versa to the point they have melded together as an ineffectual blob.
The so called two party system means nothing today because they are merely a mirror image of one another - both full of money grubbing bloodsuckers who get fat off of the rest of us while they foolishly have ceded our economic strength to China and our military strength to China and to third world countries such as Iran while we ignore our once stalwart allies. Members of both parties have joined together and have diluted our rights and liberties by continuously bowing to the desires of special interest groups and kooks instead of uniting for the good of the United States of America. They have allowed our greatest strength - unity - to disappear and to be replaced by diversity. 'A house divided against itself cannot stand..' was never more true than it is now. While the members of Congress, Republican and Democrat, appear to continuously bicker, in the end they have repeatedly come together to effectively weaken our once great strengths. Their type of unity is totally undesirable for the nation. They have come together only in their effort to destroy the United States of America and to strengthen government power over the people instead of assuring their service to the people. They do so by way of their avarice, their special concerns, their push for diversity instead of unity, their desire to appease fringe groups, their desire to look good in the eyes of a mudslinging media, their absolute lack of morality, their refusal to stand on principle, their ineptness to govern effectively, their lack of support for the Constitution, and their sheer arrogance by way of belief that they are above those they govern. They have expertly divided the people of our once great nation so much so that at this point we are pushed well past the edge of the cliff and are flapping our arms ineffectively as we hope beyond hope to suddenly sprout wings and once again soar like an eagle.
It is never going to happen under the two party system. They are so much alike as to have become one. So, as I said above, I will not vote for a Republican come the next presidential election. Since there was never any hope of me voting for a Democrat, I find myself then looking to a third choice. I truly consider the libertarian outlook as closer to that which will help reunify us and make us strong again in that unity but  have been reticent to vote for a libertarian candidate because the likes of Ron Paul, who appears to be a kooky as they come, has scared me off. Kook or not, he is not like most Republicans and Democrats and that difference alone will be enough to make me vote for him should he run again. I would rather see someone else take the reins of the Libertarian party but it matters not whom they choose to run - the Democrats and Republicans, as they now stand, do not deserve a single vote from anyone who considers himself or herself a true American patriot. Should I be able to vote in 2016, I will more than likely vote Libertarian. Should there be a Libertarian candidate for Congress, on the ballot in 2014, I likely will vote Libertarian then too. About the only way I will continue to vote Republican, as I have in the past, would be only if an awful lot of folks in the Republican party put on some brass balls and swing them mightily and effectively. Chances are though, we will not be able to sprout those wings and we are going to crash land first. We probably will not hold those elections as scheduled because, I fear, either the government will have attained complete tyrannical power by then or we will be involved in the midst of a violent revolution before either election takes place. I pray I am wrong.
All the best,
Glenn B