My Son The CHCL Holder 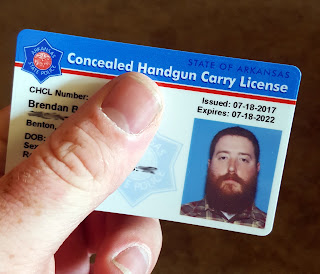 The most important thing, that happened this week, in my family, is that my son legally carried a concealed pistol for the first time today. That is because he received his Arkansas Concealed Handgun Carry License earlier this week. He never would have gotten one had he stayed in this God forsaken tyrannical socialist satellite of a Com-Bloc nation - New Yorkistan! I am proud of him for getting out to a freer state and for exercising his liberties with regard to the RKBA.

I received an email a few days ago from my local gun store guy telling me that my Rock Island Armory 1911 AS Full Size Pistol had come back from the Armscor factory in Nevada. I had sent the pistol into them for some warranty work because the slide stop was not going back into place, when trying to assemble the pistol, with manually depressing the slide stop plunger. At first they said nothing was wrong with it but when I insisted there was a problem, and told them that the owner of my local guns store (LGS) checked it and agreed with my assessment,  their customer service rep had one of their gunsmiths look at it again. They found and acknowledged the problem and supposedly fixed it. When I made an inquiry as to when it might b sent back to me, I was told there had been a bit of a delay because of the July 4th weekend. I was also told that an additional problem had been found and that the pistol was not repairable, something about the interior of the frame having been milled incorrectly and thus too much metal had been removed during manufacture. So, they decided to replace the pistol with another of the same model. I went to my LGS to pick it up yesterday. Had to do a federal transaction form ($40.00 FFL fee) and have a NICS check run on me, then had to go to the local county gendarmes to have the old one removed from my pistol license ($10.00 amendment fee) and the new one added to my license (an additional $10.00 amendment fee). I had gotten this pistol at a great price that now seems to no longer have been such a great price. Anyway, once the paperwork was done at the county police, I went back to the LGS to actually pick up the gun.

I wasted no time with it and decided to take it apart today to clean it. It came apart easily enough and much to my satisfaction was just as easy to put back together with the slide stop going into place with basically a snap. Right after cleaning it, I called my local indoor county run range to check on their hours. it was getting late and I wanted to assure I'd have enough time to shoot it if I headed that way. That was around 630 this evening. I found out they were on summer hours, much shorter than those for the rest of the year but that I still had time since they would only lock the doors at 7PM and I'd then have until 8PM to shoot. I made in there in about 15 minutes.

Before leaving home, I grabbed 5 after market military surplus style mags. I say style because while they were sold as milsurp, I am none too sure that was correct. Whatever they are, they work okay for the most part. One has been a problem and I have to remember to mark it then trash it or just use it for the range. I also grabbed the 4 Remington 1911 mags I have. Along with the magazines, I scooped up four boxes of 45 ACP. Two boxes of Armscor 230 grain FMJ ammo, about 3/4 of a box of Blazer Brass ammo and a box of  Federal 230 grain Hydra-Shok JHP ammo. I should note that at least 4 mags were loaded, two with JHP ammo and the other two with FMJ ammo.

When I arrived at the range, there was no wait and I wasted no time. I got signed in, asked for a few targets, paid up and went to my point in the assigned bay. I set up my target at 7 yards and fired 35 rounds with only one hitch. One of the round, the last one in one of the mags, failed to feed. Not a big deal, either my fault or that of the gun being brand new and needing a break-in period of 500 rounds (as per the RIA manual). I shot about a fist sized group about 1.5 to 2" to the left of point of aim. I adjusted my trigger finger to leave less on the trigger and got the same result. Next, I shot up another target firing off a few mags worth of ammo rapid fire just to assure that the pistol would function like that. I also fired it single handed in both right and left hands. Then I set up the target at 25 yards and fired three different groups. First group was at correct height as to point of aim but off to the left by about 3-4 inches. I fired a second group a bit higher up, using less finger on the trigger and the group moved ever so slightly to the right. I then fired a third group while aiming about 4" to the right and put all of the rounds pretty much in the center of the target. I need to adjust the windage or my technique.

The only other problems I experienced all were probably magazine related or shooter error. Two times, the slide failed to lock open after the last round. That was probably do to a faulty mag and shame on me for not marking it the first time to see if it happened both times with the same magazine. There was also one failure to feed of the last round from one of the Remington mags. I have to mark that too next time it happens because that sometimes also happens when I shoot my Remington R1 1911. All in all, I only put about 150 -175 rounds through it tonight but that was enough for now - I'll shoo it more on my next range trip. As far as the overall function of the RIA 1911 A1 FS, I am happy with it so far except for where it is shooting as opposed to my point of aim. That though could be either the gun or me - time and shooting it more will tell. For now though, I would be okay with it as a defensive weapon in a pinch but doubt I will carry it as my every day carry because I carry a Glock 26 for that and if I switched to a 1911 - my Remington R1 would probably get the nod.

quran Soaked In Pig's Lard Mailed To A Mosque...

...and the Sacramento, CA police initiated an investigation going so far as to determine it was a white female, in her 40s or50s, in Texas, who had mailed the package. That seems like an awful lot of wasted money and time to me especially in light of the fact that a police spokesperson said this:

"We are looking into it as hate-related activity. However, there was no actual crime committed."

Since there was no crime committed what the heck are they doing wasting tax payers' money by conducting an investigation - unless it is that they are attempting to appease what I think is a tyrannical statist organization trying to pass itself off as a religious group.

More at the source: https://uk.news.yahoo.com/quran-dripping-pork-lard-sent-112503075.html

Comfort In The Man Cave 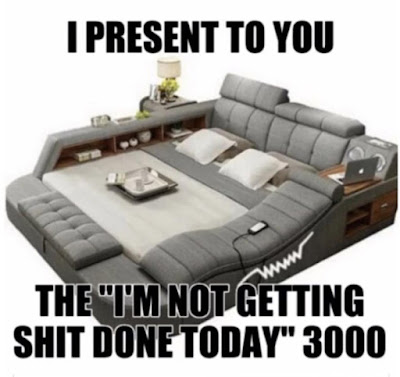 A hat tip to Mike Mc for that one.