At Least A Few Hours Left Of Pre-Road Trip Packing...

...and other preparations but I got a good deal of it done today along with some other necessary stuff I needed o get done before leaving. The thing is I have not gotten enough done of what I need to do before leaving. Thus, I am a bit doubtful that I will be able to depart early enough to get to Geneva, NY on time for the Hessney firearms auction preview tomorrow evening. I guess that just means I have to be up at getting things done early tomorrow. I figure I can leave by 11AM and still make it to the auction preview on time to see enough although, I do want to leave no later than 10AM.

One of the main things I did today was to get stuff ready to bring down to my son and that included finding some of it although I had most of it ready to go. Well, most of it except for the ammo I am bringing him. I have depleted my ammo stash by a small amount and I think he will appreciate it. This is the ammo I first decided to bring to him:

That made a tidy little package of ammo for him. He just bought his first pistol, since arriving down in AR, a Glock 43. So, I figured some 9mm would be welcomed by him. He does not own a pistol in 45 yet. The operative word in the last sentence was yet. I am bringing him a brand new Rock Island Armory 1911. I bought it months ago for myself but my plans for it changed when I learned Brendan was planning on moving to AR. I put it away and never shot it figuring I would give it to him. I confirmed through BATFE and my local county PD (issuing agency for my pistol license) that it would be okay for me to transport it to AR myself and then have it transferred to Brendan through a dealer with an FFL.
Well, after I got the ammo in the can, I decided it wasn't enough and I added a few more boxes of the 45. What the heck, I can spare it. Then I did some more chores but I got to thinking that Brendan could also use some 7.62x39mm for his AK. Once I got about half an ammo can full of loose rounds of that together, I also grabbed two 180 round range packs of Red Army Standard 7.62x39mm ammo and added that to the heap. I also remembered to grab an ammo can Brendan had left behind that contained 420 rounds of 5.56x45mm ammo for his ARs (he also has another that I recently ordered for him). As the afternoon progressed, I wound up grabbing this and that which included Brendan's Ruger 10/22 All Weather rifle. He did not forget it, it just did no fit in his car with all the other things he took with him. Yes that meant several hundred rounds of 22LR was also put into the pile. Then I remembered that he had left his Remington 870's rifled barrel behind. hH took the smooth bore barrel with rifle sights and the long one with vent rib but forgot the rifled one. Once I found that, I pus it aside with the ammo and grabbed several boxes, all I could find, of sabot slugs and threw them into the mix. I also piled on some rifled slugs, buckshot and number 8 shot shells.
This is what that mess looked like before I packed it into my car: 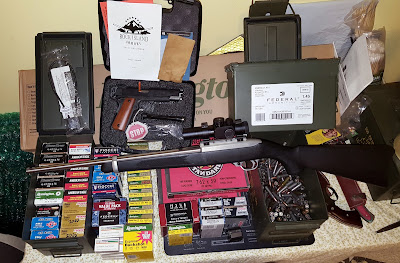 I imagine once you saw the pic, you also saw he pistol I am going to give him. You may have also noticed the Ruger Redhawk in 44 Magnum to the right of the ammo cans. I am bringing that too but that will return home with me. My bet is Brendan and I will have some fun with that and with his guns being I am bringing him all that ammo.
Did I mention, that put a small dent in my ammo inventory. There are 600 rounds of 45 AUTO, 400 rounds of 9mm Luger (he already has a few hundred rounds of that), 12 gauge 55 rounds of sabot slugs, 25 rounds of #8 shot shells, 20 rounds of 12 gauge rifled slugs, 25 rounds of 12 gauge 00 buckshot, a few hundred rounds of loose 7.62x39mm HP rounds in the ammo can, 360 rounds of boxed 7.62x39mm ammo, and 925 rounds of 22LR. I am guessing at least 400 rounds in the ammo can and using that number added to all the rest it comes out to just over 2,800 rounds of ammunition in my care package for Brendan. All that ammo, along with a set of brakes for his car (that he ordered online then wound up leaving here) and some other of his things has my Toyota Corolla much lower than usual and I still need to pack my clothes and the guns. Oh well, I imagine the car can take it.
I still need to mow the lawn, get the gas can for the lawn mower filled, fill up the car's tanks, do some things with my animals, leave instructions for my wife on how to care for all the critters (did I mention, I am going on this trip alone), vacuum and tidy up the basement, pack the rest of everything into the car (and I get the sneaking suspicion I may have to remove something to fit my two bags). If I get it all done to be able to leave by 10AM I will be ecstatic. Then it is off to Geneva, NY for the Hessney auction preview tomorrow and the auction on Saturday. I am headed to FL after the auction and will drive as far as I can although the auction only ends at 4PM so it will not be more than a few hundred miles. I will drive further on Sunday and Monday, which is the day I expect to arrive in West Palm Beach. A few days there with my uncle and then I will be off to AR to see Brendan. As long as I get a week and a half or so in AR with Brendan, I will be happy. I plan to be home on Saturday May 20th or Sunday May 21st. I have work the week of the 21st.
I am looking forward to it all.
All the best,
GB

Self Identifying Can Be Dangerous 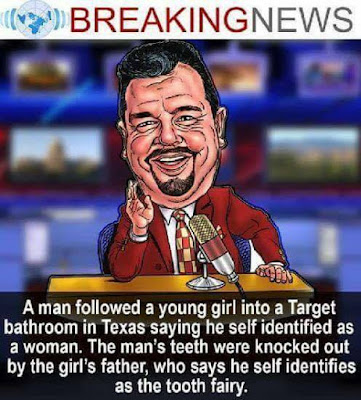 As it should be.

Some Not So Fine Police Work

A police woman in LA (not Los Angeles, the other one) essentially went berserk, threatened to kill her own brother's wife and it was all caught on a police body camera. Go to this link and watch the video, heck you may even want to read the story. They let her resign. I wonder if the other officers reported her and if not are they facing departmental charges?

Just imagine her pulling you over for felonious mopery!