Are Ammo Prices About To Soar

I am not saying they are or they are not but with the price of gasoline going through the stratosphere one would expect that prices will go up. As a matter of fact, and reported on here for your information, SG AMMO expects ammo prices to rise in the next few weeks:

I consider it my duty to inform our customer base that significant price increases on various brands of ammunition will go into effect in the next few weeks, We will hold back on raising prices on certain items that are currently in good supply, however it appears inevitable that a broad line of commercial ammunition products will rise in price, so please consider that when evaluating your ammo needs. We will continue to search for special purchase items of better than average value and offer the best prices we can on our entire product line.

The above quote is from their homepage at: http://www.sgammo.com/.

I may have to check my recent inventory to see what I may be low on and then stock up on some of that. I recently ordered a 440 tin of 7.62x54R, from MilitaryShooters.com that should arrive tomorrow. That went for $92.14 shipped. Tonight, I ordered a case of 500 rounds of Federal® 9 mm 147 - gr. JHP Ammo from the SportsmansGuide.com. That set me back $159.21 shipped (with club membership discount and a $5 off online coupon). I also was thinking of getting some more 7.62x39 and .223 since I have still have some money left over in my guns ammo money fund. I had $1,200 for the gun show last week ans spent nowhere near that much. Since then though I spent most of what was left over on regular expenses and these two ammo orders. Still though, there is some left over, so I am tempted to at least pick up anything of which I may be in short supply or that .223 or 7.62x39. Decisions, decisions, decisions - tough as they are, they need to be made! I guess my next order should come from SG Ammo since ghey were nice enough to give the warning about the expected price increases (and they have pretty good prices and pretty good service too).

Pres. Obama: No Wonder He Won't Show His Birth Certificate

The sovereignty of the United States of America apparently means nothing to him after what he said today:

“No matter who you are. No matter where you come from. No matter what you look like. No matter whether your ancestors landed here on Ellis Island or came here on slave ships or came across the Rio Grande, we are all connected. We will rise and fall together. That’s the vision of America I’ve got, that’s the idea of the heart of America...” President Obama said at a fundraiser in San Francisco. (see:

I find that absolutely disgusting. I think (in my personal opinion) that he should be removed from office as soon as possible by way of impeachment or any other legal means. Did I spend over 31 years of my career enforcing border laws of one sort or another, working hard, being a good citizen, paying taxes, raising my family as American citizens so that he just waves everyone in and lumps us all together no matter who.

"No matter who you are"!!! So is he saying that every motherfucking MS-13 gang banging murderous scumbag who is here, every cocaine smuggling dirtbag, everyone who came here illegally then proceeded to bleed us dry then go back to their own countries when they have had enough, is that whom he is saying is part of his vision of America. Whatever happened to rewarding the hard working, good people of the nation and trying to root out and rid ourselves of the ones who soak the system dry or who out and out commit crime with no regard for the law or for the good of our country.

I love the United States of America and I love a way that seems to now be that of a bygone era, one that I long to see again. So, what to do in hopes of seeing it again? God damn, well I declare, I am going to have to buy some more guns, ammo and maybe even a bible. I think I will also start voting straight conservative (not for RINOS or Libertarians) on all issues (even though I do not agree with all of them) and give more money to conservative political candidates (not to RINOS).

We are, I think (personal opinion again), doomed if this man continues to ruin run the U.S. of America. I plan to do my best by legal and ethical means to see someone else in the Oval office next time around. I cannot wait until I am retired at the end of the year to say plainly what I really want to say, and to actually be able to campaign for candidates. For now, I cannot violate laws that restrict me from saying it since I still work for the government and cannot afford to lose my job.

Okay, maybe you spell it Krummerlauf, but if you know what it is then it does not matter how you spell it. The one I saw was said to be complete. While I was at the gun show, up in Syracuse, NY, last Saturday, I saw one of the most unusual rifles I have ever seen. Well, truth be told, the rifle - a German MP44 - was not all that unusual except for the attachments added to it. Those attachments were a grenade launcher, a prismatic sighting device and a bent barrel. At first glance, I had thought the barrel had been damaged and wondered why this particular rifle was on display. Then I spoke to the woman displaying it and read the info sheet she had available on her table. The devices were actually used by the Germans during the last year of WWII on the Russian front. 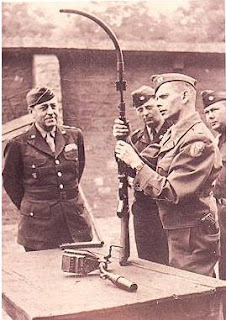 In a moment of pure noxious brain fart attack, I did not immediately pull my camera out of my pocket and take pictures of the whole magilla, as a matter of fact I did not take any pictures inside this gun show, shame on me but I was too busy gawking. I can assure you, if I am again at a gun show, with my camera handy, and see one of these, I will take plenty of pictures. There is a paucity of pictures available on the Internet from what I could find and most are terrible quality and small in size. Nonetheless, I was able to find a couple of pics to put into this post and am quite grateful that someone posted them online and that someone took them in the first place. While the ones in the pics do not appear to be exactly the same as the one I saw at the gun show, they are close to it and will give a good idea of what it looked like.

Much to my surprise, in my 5th or 6th attempt to find better pics, I ran across this video of them in action.

It sure looks like you could have fun with one of these but I am not too sure than any range personnel would appreciate me bringing one of these to a local range. Of course, it might get the same kind of looks as the guy in the above pic is giving the one he is holding, and there would be lots of conversation sure to ensue.