As a matter of fact, this past August (maybe old news for you but the first I saw of it was today) there was a firearms auction in Los Angeles for firearms that once belonged to Old West legends such as Billy The Kid, Pat Garrett, John Wesley Hardin, Wild Bill Hickock (and maybe others). 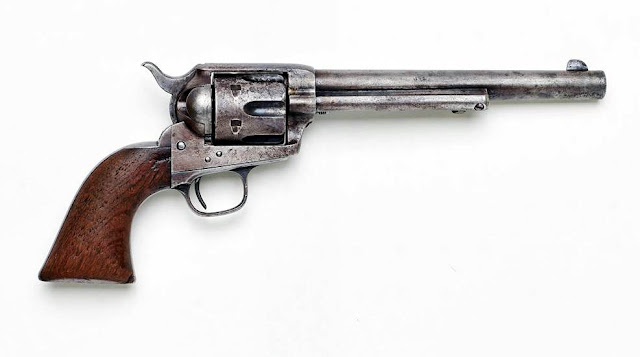 The one pictured sold for a record setting $6,030,313.00 (yes as in over 6 million dollars). Historically, it was the one with which Pat Garrett shot down the heinous outlaw & killer Billy The Kid. That particular Colt Single Action Army revolver has supposedly been documented ever since it left the hands of Garrett and if the documentation is true and genuine - that is one heck of a good chain of provenance. More at the source.
I suppose people with more money than 10 Popes and thus with nothing better to do with it than flaunt it big-time decided it was time to start a bidding war. I just have to hit the Mega Millions, Power Ball or Lottery - merely one time but definitely for a small fortune of let's say maybe a half a billion clams. That way I could get in on all the fun and one way or t'other, even now well after the auction, I'd become the owner of it (you could bet on that).
All the best,
Glenn B
Posted by Glenn B at 10/01/2021 01:22:00 AM No comments: