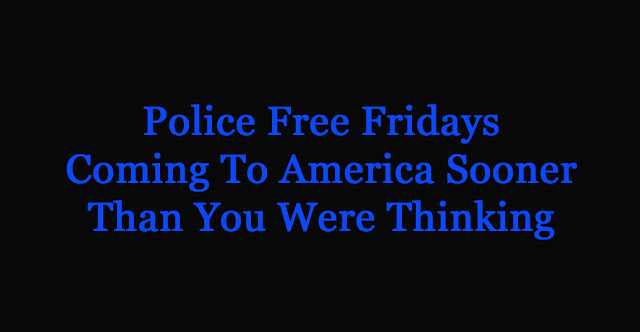 I think that each and every police officer and other law enforcement officer within the United States should join together in solidarity and plan to hold Police Free Fridays for the month of July 2020. On each Friday next month, every police & law enforcement officer in the country should refuse to show up for work for the entire 24 hours in each of those days. They should advertise the fact that they will be staging Police Free Fridays to the world so that every criminal on the earth will have ample opportunity to act accordingly. I figure by the second Friday, criminals will realize it is for real. By the third or maybe the fourth Friday the leftist extremists, politicians, hate groups & all citizens (except maybe the criminals) will be begging them to go back to work and all thoughts of defunding the police will have vanished from memory. By the fifth Friday, every LEO in the USA will have received a bonus to return to work.

A Fair And Impartial Judge & Jury - No Way

So does anyone think that Derek Chauvin and the other three cops accused in the death of George Floyd can get a fair trial with an impartial jury and judge? I do not think it possible and yes even if guilty as sin, which they appear to be to me right now, they are entitled to a fair trial including impartial jurors and judge. Who among you can honestly say you do not already hold an opinion of Derek Chauvin's and the other officers actions (or lack of them) and as to their guilt or innocence in the death of Mr. Floyd. You would pretty much have to have been trapped in a coal mine, as in The World The Flesh & The Devil, for the last few weeks not to have one on this case. I'd consider paying for lie detector tests to be given to each of the jurors selected for his case to determine if they will have lied or told the truth about being able to be impartial - oh yeah I'd probably pay for one for the judge too - that might be the most interesting result.

Of course, strange things have happened within our criminal justice system - look to the Rodney King case. I for one probably would have voted for conviction based on my knowledge of the case, and proper use of force, at the time after watching the video of the beating the cops in CA gave him. Of course, you do not know all the facts until you have them presented in court. So, while even a partial juror, one way of the other, could be swayed toward a fair and just verdict based on the presented evidence during trial, I still I find it next to impossible to believe an actual impartial judge & jury can be selected in the George Floyd case after all of America has been so badly effected by the media's coverage of the case, the politicians howling for their heads, the hate groups hating and all of of the rioting and looting that is still ongoing.

Of course, the cops could do the entire nation a big favor by pleading guilty and while I also doubt it will come to that, I believe there is more of a chance for it to happen than for them to face an impartial judge and jury.