A Week To Go Until The Election...

...and a week, or maybe 8 days, until we find out just how far our nation has descended into the maelstrom or insanity, the sewer of a lack of basic morality, the pit of respectlessness that society has become. I mean just look at the two candidates who are running for the presidency of the most powerful nation on the face of the earth. One is, at least in my opinion and the opinion of many others, an absolute unrepentant liar who lacks any sense of respect for the voters and citizens of his country and who also lacks any apparent sense of respect or duty toward the Constitution upon which our nationhood is based. The other is, in my opinion, a basically bumbling fool who wants to appease everyone even his worst enemies, even the other guy running for president the friend of the reported terrorist William Ayers.

It has gotten so crazy that I wonder, if the more liberal of the two wins, will our great nation actually become a communist/socialist haven in the west! It seems so to me. Yet, even if the other guy wins it seems that we will not be far from the same once all of Mexico's poor swarm across our borders to be embraced by him. I also wonder how far are we from becoming a nation like Venezuela, or a nation like France, or a nation like the once Great, and now not so Great, Britain, or how long it will be until we are totally devastated and wind up like Mexico or Haiti or maybe even Iraq. Whoever wins, I think we lose. Of course I think we lose more if Obama wins, much more as I see it; but regardless we lose with either of them as president.

You see we lost already when these were the two people chosen to be the candidates. We have decayed as a nation if we depend on two choices such as these to be our leaders. They are apologists - yes both of them are. McCain makes apologies for everyone, and Obama makes apologies for socialists, radicals, haters, terrorists and ultra liberals. They are also apologists for themselves and their radical ideas of how to run our country. It is simply enough to make me sick. I am almost saddened that it is not over already and that Hillary Clinton is not our president - please note I said almost.

Just had to get that off of my chest because I just saw this: 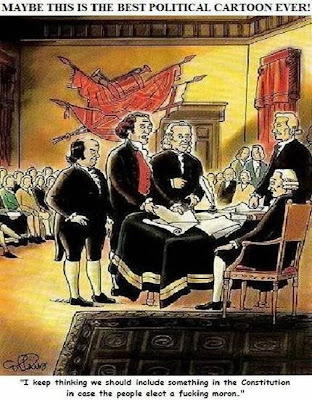 The only thing that cartoon did not get right is that it called us the People when it should have said the assholes gullible!

Start thinking about 2012 folks, think about it really hard too because after this election we are going to take it where the sun does not shine tax wise, defense wise, loss of rights wise, immigration wise, jobs wise, culture wise, and so forth. Next time around, I hope that we will pick two candidates who are truly better qualified for the job, guys who make sense in their approaches to running the country, and guys with true executive experience under their belts. Ex or current governors would have been much better choices, so too would have been ex-mayors as candidates, at least on the Republican side. Just look at what we have now!

List Of Shooters Willing To Help You Learn To Shoot

Today I received an email from Mulligan of Do Over: http://outofoptions.wordpress.com/ asking if it was okay to include my info on a list of folks willing to help new shooters learn to shoot. Of course, I said yes.

Now for the good news: If you are a new shooter, in need of some instruction, there is a place for you to look where you can get an idea of those who are willing to give you a hand with the basics across the USA. The list covers people in 13 or 14 states who apparently are willing to help new shooters learn firearms basics. I cannot vouch for any of them as to shooting abilities or instructor abilities that is except for myself, and while I am not on that list yet I imagine I soon will be there. The thing is though, these folks are willing to give you some personal instruction in the use of firearms, and as far as I am aware they are doing so at no charge for their services. As I said, I cannot speak for each of them but I do at least know I am not charging anything.

If you have been looking for someone to teach you the basics, why not go to this link: http://outofoptions.wordpress.com/mentors/ to see if there is someone listed in your area. It may be that you find that for which you have been looking. Even if you decide not to take advantage of the free instruction offered by these folks and you decide to seek professional instruction for a fee, the chances are that some of these guys and gals could get you on target for that too.