Well, I Never Got The Chance Last Night... 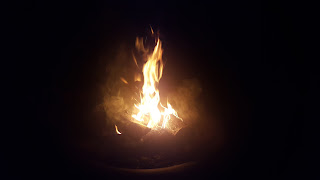 ...but I did tonight, to light a fire and imbibe some cheers in honor of Brendan. Man, I miss him and wish he was here but am more than happy for him that he is out on his own making it in the world. Like his sister Celina before him, I am very proud of him. My young ones have both turned out to be productive and great Americans.

I renewed a 2 year contract with Verizon for TV, Internet and landline phone. last year it was a royal pan in the arse as I dealt with a rep on the phone who fed me a line of BS saying I would pay so much and not lose any channels when I switched to their Extreme HD package. I had to phone and email a supervisor many-many times to get that straightened out without being charged a cancellation fee before they got it right. Anyway, today I renewed online. I discovered that to add only Cinemax to my channel lineup was an additional $10 (plus tax) - not bad. I almost went for it.

Then I checked out the Ultimate HD package. To add that was quite a bit more but when I added it, an item in my old contract, for which I had been paying extra, was removed because it was included under the new Ultimate HD package. With the Ultimate HD package, we will now be getting all of the same channels we had previously, plus we will get I think 14 Cinemax channels, plus several other channels we had not gotten before (a lot more sports channels of which one is about hunting and fishing and thus I will watch), and some new movie channels and others. Like my old plan, there is a $20 per month discount applied for the entire 24 months. All in all, the new plan with many more channels (including Cinemax) is going to run me a total of $10.29 additional to what I paid under the old contract - and that is not a bad deal at all.

I Think She's Done This Before

I just wonder if she knew that cellphone
or whatever it is was under the chair.
All the best,
GB