I just finished editing my blog roll. Some of the folks who were in one category are now in another, a few from one blog list or another were moved up to the Grumps, Geeks, Gun Guys, and Geniuses - All Worth A Read And Who Gave Me A Courtesy Link list. That is because after carefully perusing every blog to which I link, I discovered that quite a few bloggers had links back to my site that I had not been aware of before. Those links back to my blog deserve extra recognition in my esteem, thus they were moved up to the blog link list at the top that notes they gave me the courtesy of a reciprocal link. If you have given me a reciprocal link and I did not move you up to the above mentioned blog list, please let me know.

I also added a new list of bloggers. The list I added is of those who appear to have gone missing in action due to infrequent or no current blogging. By infrequent I mean that usually more than a month and often a longer period passes before you know they are still alive and typing. By no current blogging I mean just that, it appears a blogger has stopped blogging altogether. If they come back to life in the Blogoshpere, then I'll bump em back to another place on the blog roll. 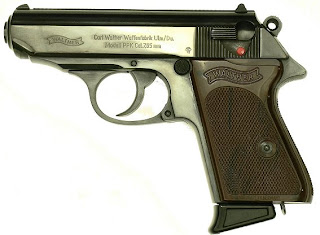 I have always wanted a Walther PPK or PPK-S. Maybe it is the influence from all of those spy movies when I was a kid, I mean didn't James Bond carry one of these for a few movies/books! Then again there is the Walther name that is imbued with quality - well at least such was the case years ago. If I understand correctly they are now being produced for the U.S. market by Smith & Wesson and sadly I feel the quality is just not the same as it once had been. I have not heard too much about Walthers as of late except for when their products fail. For example there is currently a recall on some models of Walther PPK and PPK-S pistols; and I have heard they make a pistol in .22LR that is - well let's just say I would not own it.

Nonetheless, I would still like to own a Walther PPK or PPK-S. Preferably an older PPK in either .32 auto or .380 auto, and not a PPK-S as pictured (note this was in in .32 auto) since someone who is just dreaming can afford to be choosy. Since I do not own any pistols in .380, that would probably be my caliber of choice for one of these pistols although the .32 auto would also be okay by me. The Walther PPK was introduced in 1931. The PPK-S was introduced subsequent to the enactment of the Gun Control Act of 1968 in order to comply with anti-gun laws within the USA. There were those Democrats screwing us over even way back then! There is not much difference between a PPK and a PPK-S except for weight and as I understand an additional one round capability of the PPK-S; but you can bet I'd prefer the PPK - one that was made in the Deutschland, one that was unfettered by gun control laws.

The current production specs for a PPK in .380 follow:

The Walther PPK is quite concealable and is a good candidate for either on the belt in a holster carry, or for carry in a pocket. Personally I do not like carrying pistols in my pockets, and much prefer and feel safer with one in a holster on my strong side hip. They are available in blued or stainless steel finishes. I like the look of blued steel guns better and would probably but not necessarily go with that. Stainless has the added advantage of being much more corrosion resistant so I would have to consider such when making up my mind. As for carrying it using mags with the thumb extension, as pictured above, no thanks, I could do without and prefer flat bottomed magazines.

Though small pistols, they do not have a small price tag. The suggested retail price for either of the PPKs mentioned above is $605.00. My guess would be that currently they may be somewhat more expensive what with the anti-gun crowd we now have in Washington, DC.