...I can take them or leave them, almost always  preferring to leave them. That is exactly what I have done each of the several hundred times I have gotten something out of or put something into the fridge in our basement when I have seen this on or of the shelves on the inside of the door: 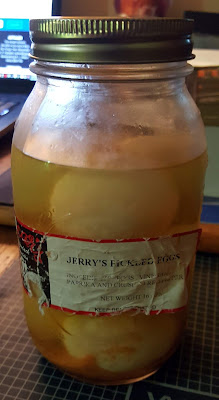 Yes, that I took a pic of them means I actually pulled them out of the fridge today. Did that because I told my son, a couple of days ago, that the eggses (they made me think of what Gollum might eat) he pickled ages ago were still in the fridge.
Now that I have taken them out of the fridge, I am none too sure he pickled these as they look to have been store bought. I did not buy them so Brendan must have bought them (or used that jar with the label already on it if he pickled them). Regardless, they have been in the fridge at least since last December when he visited us for Christmas or longer. Longer would mean they have been in there at least since before he moved to AR in March 2017 or pretty long ago far as keeping things fresh in the fridge goes. I wonder how long it will be before the jar explodes.
By the way, if you are up this way and in the mood for a pickled egg... On second thought, maybe you would want to get them somewhere else being these are a bit old.
All the best,
Glenn B﻿