Ammo Can Labelling - Why Have I Never Done This Before

There I was, a couple of days back or so ago, browsing blogs on my blogroll, when I came across this linked post over at The Miller that showed this photo: 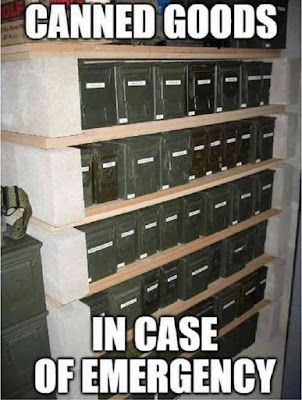 I have seen better looking ammo shelves with ammo cans that were labelled in a similar fashion but this one was, for whatever reason, the one that got me to pull the trigger - or at least to press the keys of my label maker. It did not happen right away﻿ but today, a few days after seeing that pic, I was rummaging through some crap in my basement and moved the bag I use to carry stuff to my local herp society meetings. As I was doing so, I suddenly remembered that I had a label maker somewhere inside of it.
Almost as soon as I had though of it, I had the label maker in hand and the next thing I knew I was pulling out all of my ammo cans and labelling them. I labelled them to the calibers within, keeping it pretty to just basic info on the label like 45ACP JHP. I placed one label on the top front leading edge of the can and one at the top of the can latch on the front side of the can. After about an hour and a half or a bit more, I had all of my thirty eight 50 caliber cans labelled plus two spam cans of 7.62x39 and two spam cans of 7.62x54R. Of course, that does not include any of the ammo inside my ammo trunk.
What that is going to accomplish is to make it a lot easier for me to find an ammo can for which I am looking. If I get really ambitious, II can make it even easier by building a dedicated shelving unit for the cans. So, I may head to Home Depot later this evening and pick up some concrete block and boards to build a shelving unit on which to stack the ammo cans. Then, if I do buy some blocks and boards, I will probably also buy some paint to make it look half arsed acceptable to she who must be adored if not obeyed. I know from experience way back in my single life, when I had cinder block and board shelves as my living room furniture, that unpainted cinder blocks and unpainted wood are pain in the arse to keep clean and I am guessing painted ones would be much easier to maintain. Damn, where to put a shelving unit though is the big question so what I need to do first is to find a frigging place to plop it down.
One last thing: When labelling the cans, I decided to leave the two spam cans of TULA 7.62x39 ammo in the outer shipping / packaging boxes. When I picked up the first one, I heard a telltale rattle inside of it and knew that it was not the ammo. I sliced the tape on the box, peeled back the lid, and smiled when I saw the span can opener that was what had been doing the rattling. I opened the second box and found another one in there. Then it was decision time, leave them in the boxes or take them out and stash them where I am sure to find them when I open the cans. I took them out. before putting them in a secure location, I chose to label them too.