I was officially a year older yesterday. Brendan took me out for lunch, at the Bavarian Grill in Plano, TX, after we left the Premiere Gun Show at the Big Town Events Center over near Dallas yesterday.

Look at these photos and all I can say is what a difference a bier makes. I only had one (seriously because I was driving - I waited until I got home later to do more imbibing). I was happy regardless; heck I was getting free bier and eats and had excellent company. 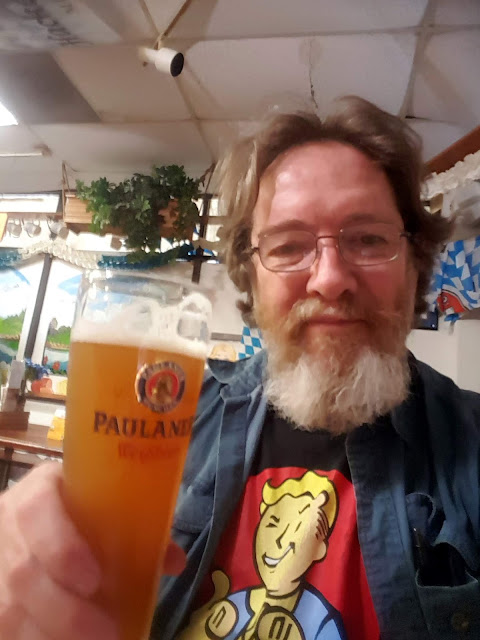 For some reason or another though, someone did not seem all that ready to smile for the camera. Maybe that was because he was paying or because his company was not as good as mine! 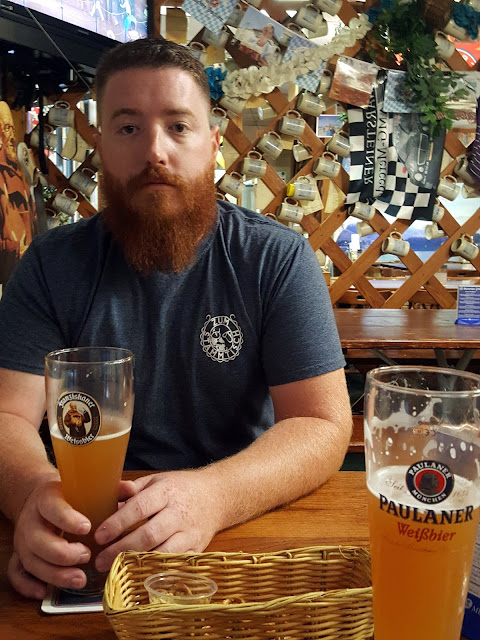 About 1/2 hour later, on the second bier, it seems it was much easier to smile. Maybe because I asked him to smile for his mom.

We had some gutt bier und essen. Then a quick stop back at the show and then we headed to my place near Texarkana. Spent a couple of hours talking and drinking and watching TV before he was snoring on his airbed in my living room. I watched the rest of a movie and then headed up to my bed to catch some Zs. Not a bad way at all to have spent my birthday, in  fact it was excellent. Brendan headed home to Benton, AR today. Cannot wait to see him again soon.

In the mean time, I have my tortoises for company and hopefully soon will have a dog.

Let me tell you a bit about T&G Sales. I bought a magazine from them, for my Beretta 950BS Minx, at the Mesquite Rodeo gun show a couple or few weeks back. Wound up the magazine was defective and I had no receipt and figured it was a lost cause. It was a Triple-K mag but I thought it was doubtful they'd replace something for which I had already tossed the package into the trash and for which there was no receipt. Then, I found a business card in the bag the mag had been in from the show. It was for T & G Sales. I sent an email to the proprietor Rich Scott, told him what was the issue with the magazine and asked if he could do anything about it. He said to send it to him because he would replace it. I sent the mag to him, he received it, he also said he'd send me a new one, likely next week.

Brendan (my son) and I went to the gun show at the Big Town Events center on October 5. I saw that T & G Sales had a table at the Big Town show and went over an introduced myself to Rich but only right after taking another Triple-K mag off of his display. I told him who I was and asked if I could just take that mag as a replacement. He most cordially agreed and asked if I had taken it out of the package to examine it which I had not done. So, he took it out, looked it over and asked his associate to find him a box of 22 short. In just a little bit, he loaded the mag full of 22 short rounds to see if this one worked then pushed each out with his thumb and one after another they were pushed to the top by the follower. The first one I got would have failed this test miserably, heck I could not load more than one round into it and then it would not feed.

So, I was happy to take this replacement. I told him I was glad he checked it because it meant I would not have to return this one and joked that it could wind up getting expensive for both of us due to postage to ship the mags. We talked a bit more and I was saying thanks again and goodbye when he pushed a ten spot toward me and insisted I take it for the postage. I tried to say no but he insisted. I took it then told him we could split the difference and a 5 would be more than enough but he again insisted. That certainly was not my intent when I had mentioned the postage and I am sure he knew that; he just said he stands behind what he sells. I have not met many small business men as good as Rich  Scott of T & G Sales! He was a truly professional, courteous and nice dealer who actually did stand by what he sold and who went the extra mile to make sure his customer was happy. So, I told him next time I am there to buy mags, he could be assured it will be from him.

I told Brendan about that maybe an hour or so later when we ran into one another in our ramblings around the hall. I told him if he was going to buy any mags to go to T & G Sales. That's what he did and he bought an AK mag there. I am pretty sure he only did that because Rich had done such a nice thing for me; Brendan certainly did not need anymore AK mags and was short on cash so it seem he went out of his way to payback Rich's great service to me. Anyway, I went back over to the T & G Sales table later on, Rich was not there right then but his associate helped me, and I bought a two-pack of Ruger BX-25 10/22 mags. When I need mags when at future shows where T & G Sales is present, I'll be buying from them if they have what I need. Great guys, large selection, very good to excellent prices, excellent customer service - it does not get better than them.

Believe me, if they had a web address on their business card, I would have posted it but they do not. I guess they only do local or regional guns shows in Texas.